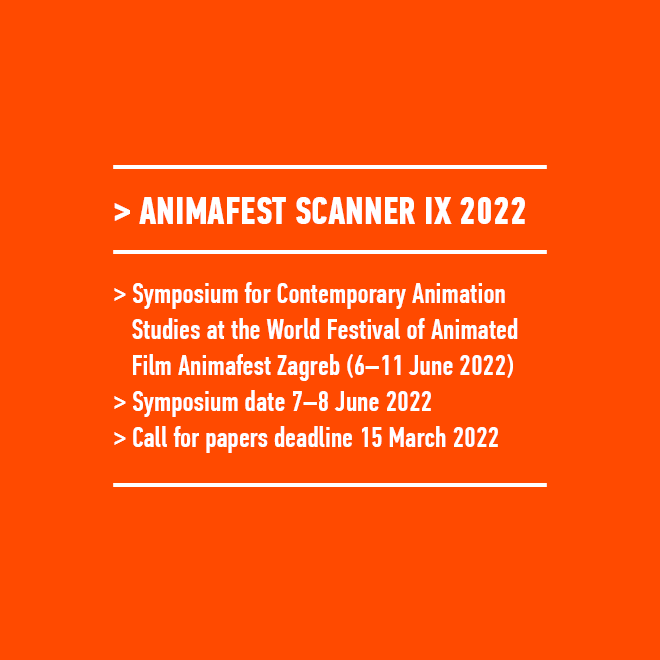 With the aim of creating synergy between theoretical and practical discourse among filmmakers and scholars, the ninth Animafest Scanner IX 2022 international symposium takes place 7-8 June 2022, and international film and media researchers are invited to present the latest findings in the field of animation.

The 2022 symposium Animafest Scanner IX is once more at the frontline of the discourse in animation studies. By focusing on the state of contemporary European animation and its future, influences of Zagreb School of Animation on world-wide animation, global Animation and its history (as a tribute to Giannalberto Bendazzi) and questions of gender and diversity, Animafest Scanner invites international scholars to present and discuss new theoretical approaches and practical applications. Located at one of the most respected animation festivals in the world, it is a meeting point for many leading artists and professionals. The ninth edition of the Symposium for Contemporary Animation aims to stimulate the exchange between filmmakers and researchers.

The circumstances and opportunities of animation in Europe have been changing greatly in the past several years - the pandemic made it even more challenging, although the situation would be very complex even if nobody had ever heard of the word COVID. How to organize work, find the crew and finance projects, how to show your work in Europe and beyond seem to be the most obvious questions. However, the artists and their social context remain interested in other important issues as well - diversity of author animation and identities represented in various European cultures and societies, the reasons for the success of some regions and production hubs, the role of festivals in promoting European animation, and so on. Where are we today, and where are we going in this field? The answers to these questions can be greatly diverging, and it would be very interesting to hear them at Animafest Scanner.

The festival in Zagreb was founded on the global success of films by animators known as the Zagreb school of animation. Those authors used a wide variety of styles, from images reduced to geometrical forms of Vukotić and Mimica over nervous lines of Dragić to partly post-impressionist Satiemania of Gašparović. And from gagman, as Holloway detects in his Z is for Zagreb book from 1972, to Professor Baltazar - a scientist who always finds peaceful solutions in his laboratory. What legacy did these films from the 1950s to early 1980s
leave behind to the world of animation? Which filmmakers did they influence, and how? What does the generation of today’s young authors think about those films? Who and in what way did the flat worlds, limited animation (which on its own was influenced by modernism in the art of the time and UPA) and melancholic “small man struggling in the cold modern society” stories of Zagreb school of animation inspire?

By the end of the year 2021 animation artists lost their most perseverant and benevolent biographer. For many animation scholars he was a generous advisor, introduction writer for their books, and a farsighted editor. Our small animation community lost Giannalberto Bendazzi. Still, his books will remain, especially his Animation. A World History, used worldwide as the only one reference book indispensable for our art. How do we write animation history? Why do we write it? What still remains to be written in the global animation history? Will our methodology change, have we found a new approach to the history of animation? Shall we proceed along Bendazzi’s paved path and, with the passing of time, just continue with updating? Or is there another way to systemize and categorize the art of animation throughout its history?

A majority of representatives of the global community has agreed to treat every human being the same way. It is outlined in the Universal Declaration of Human Rights that everyone is entitled to all the rights and freedoms without distinction of any kind, such as race, colour, sex, language, religion, political or other opinions, national or social origin, property, birth or another status. Ideally, this means that humankind, all of us, should be open to embracing and cherishing diversity of all sorts and on all levels. And this issue goes far beyond the boundaries of animation, wherever one may see or set them at any time.

But our reality is looking very different: unfortunately our society isn’t able to pay women and men the same wage for the same work, nor are the tasks of care and fostering equally distributed between genders. In addition, physical violence is still mainly executed by men, directed primarily against women or people who don’t fit into a binary gender concept. Animation is a field that allows experiments, role-play, transgressions, and multiplicity. How can practical examples or theoretical examination support us in expanding our ability to embrace the potentials of diversity, starting at a point that touches central aspects of our identities?

During the two-day event, ideas and thoughts will be exchanged with festival guests, filmmakers, producers, professionals, journalists, organizers of other festivals and theoreticians. The ninth Animafest Scanner Symposium for Contemporary Animation Studies is fully integrated into the World Festival of Animated Film Animafest Zagreb and reaches out to scholars, artists, and an interested audience. The four key-topics of the symposium are complemented by additional animation screenings, presentations, and exhibitions.

Historical trends, numerous points of view and approaches, new findings in the growing field of animation studies and interesting speakers – all this will be available at Animafest Scanner 2021, whose primary goal is to create a synergy between theoretical and practical animation discourses, which is why it takes place in the context of screenings, exhibitions and other Animafest’s side events.