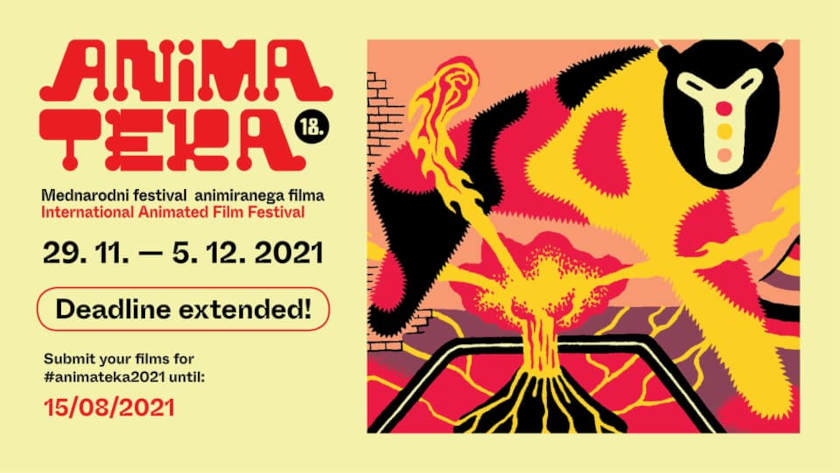 Animateka is a week-long international festival of animated film, takes place every year in Ljubljana's Kinodvor and Slovenska kinoteka. Beginning on the first Monday in December, it focuses primarily on the latest production of East and Central European short films. European student films and International films for children.

Despite the uncertain situation presented by the global pandemic and the limitations as well as worries that have come with it, the 18th edition of Animateka will take place in one way or another, with the festival team doing its best to bring the diversity of animated art to its fans. The festival will take place from 30.11. to 9.12.2021.

The Elephant in Competition (an international programme of short animated films for children)The competition is open to films created inany animation technique, frame by frame or by computer graphic. Short animated films (the duration of which must not exceed 30 minutes of the total running time) from all countries worldwide are eligible for competition.

The films must be completed in 2020 or 2021. Films previously screened at the Animateka festival are not eligible

This year the visuals of the festival were prepared by Igor Hofbauer, a Zagreb-based artist well known for his illustrations and comic art. Hofbauer started his career in the mid-1990s, creating posters for the local music scene, which led him to a collaboration with the then-popular underground club Mocvara. Establishing Mocvara’s visual identity for almost 15 years gave him the chance to work with a network of regional and Ex-Yu clubs and bands. In the meantime, he became an illustrator and comic artist which he is still to this day. He has published several comic books, including Mr Morgen (L’association, 2016).

The author of the 16th Animateka visual identity is Edmunds Jansons, a renowned animation film director and graphic designer from Latvia.

From its very beginning the cinema has developed as a two-headed eagle - with one head looking into reality - documenting, observing, commenting our lives; the other head looking to the magical side of life - where the dreams, tricks and fantasies are. What I like about animation the most is that these two sides/directions coexist there naturally. That feeling about the duality of animation - I tried to capture it in the poster. Why fishermen - that’s the first image that comes to my mind when I hear “Baltics” - sea, fish, boats, fishermen - silent, harsh and strong - Edmunds Jansons

This year the festival recieved 669 films, which is 65 more than last year. 120 out of 696 films tried to get into the Central end Eastern European competition programme, 281 films applied to compete in the Young Talents competition, while 268 of them would like to take a chance in the Elephant competition programme, aimed at children. Submissions were received from 63 different countries, from Poland and France to Singapore and Afghanistan. Slovene animators did their part too, as they sent 35 films.