Brave, The Making of Longbird win at BAFTA 2013

Pixar's Brave and the documentary animation The Making of Longbird (Will Anderson, Ainslie Henderson) won the BAFTA award at the feature and short animated film respectively.

It was a Scottish night for animation at the 2013 BAFTA awards. Pixar's Brave was the big winner in the feature animated category. After the Golden Globe win, the Scottish-theme animation won over Disney's Frankenweenie and  Laika's ParaNorman.

In a joint appearance, director Mark Andrews thanked his fellow director, Brenda Chapman, whose story provided the inspiration for the film. He carefully noted that Brave "doesn't rely its happy ending on a Prince Charming, that is centred around this dynamic lead female".

Brenda Chapman, who abandoned the film (and later Pixar) due to creative differences, thanked her daughter, who "inspired this film from the beginning". Both Disney's Wreck-It Ralph and Dreamworks' Rise of the Guardians were left out of competition.

In the short animated film category, The Making of Longbird was the winner 3 films were also selected:

The film has been presented at many international festivals, including Annecy Festival, Animafest Zagreb,  and Stuttgart Animation Festival.

Scottish director Will Anderson thanked the Edinburgh College of Art, where the film was made.

The 3 short animated nominated films were:

The BAFTA 2012 winners in the animated categories were the Oscar-awarded Rango (Gore Verbinski) and the Academy Award-nominated A Morning Stroll (Grant Orchard, Studio AKA). 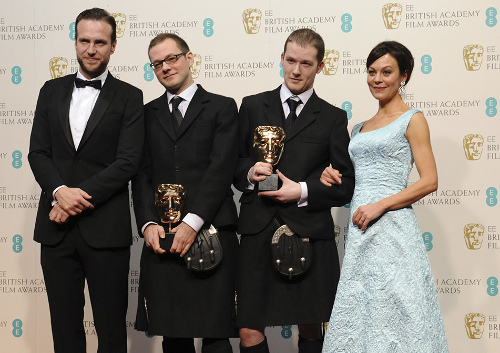