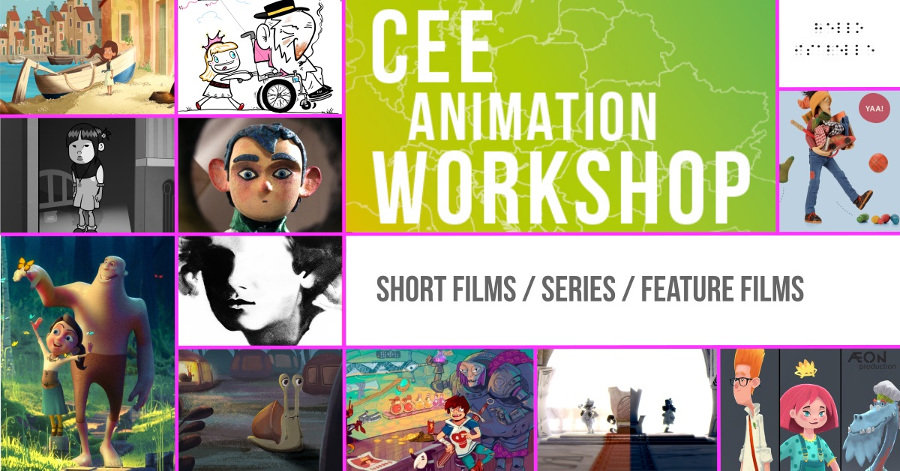 The first module of the year-long CEE Animation Workshop will take place from November 30th to December 6th in Ljubljana and will focus on content development. Invited tutors who will guide the participants are two experienced script advisors Rita Domonyi and Phil Parker. The group sessions will be led by Ewa Puszczyńska and Ole Wendorff-Østergaard. The workshop will bring together 12 animated projects, including 4 feature films, 4 series, 4 short films, and 5 participants without project.

Two SCRIPT CONSULTANTS will work individually or in group sessions with the project teams, helping them to formulate the voice of their story in the best possible way in terms of dramatic structure, genre and story arc.

Rita Domonyi started her carrier in animation at Varga Studio, where she became the Creative Development manager of the company. She is also the teacher of Moholy-Nagy University of Art and Design, and gives script editing lectures on the Faculty of Animation Studies.

Screenwriter and creative producer Phil Parker has developed original content in over twenty countries demonstrating there is a global capacity for new concepts. His clients have included Aardman Animation (the Oscar winning Wallace and Gromit – Curse of the Were-Rabbit and multi-award winning The Pearce Sisters), the Mob Film Company (Terry Prachett’s The Hogfather), Foreseesense and many others. Phil Parker, co-wrote Manou the Swift (2018) and is a co-founder and CEO of BCre8ive, a multiplatform online development company.

The GROUP LEADERS will be the closest collaborators to the participants. During all three workshops they will moderate the discussions and work inside the groups, but also bring their own feedback and offer their expertise on participant’s projects, drawing from a rich professional experience as leading European producers.

Producer Ole Wendorff-Østergaard has large co-production and film finance experience from films such as Antichrist by Lars von Trier, The Model by Mads Matthisen and Another Day of Life. From 2007 to 2010 Ole was a financial producer at Zentropa and a part of the producer’s team of 9 features with a total budget of over 35 mil. EUR. Within the first workshop, internationally renowned SPEAKERS will give an insight into the important issue of script writing and will share their valuable experience in the field.

» MASTERCLASS: Managing Creativity
Paul Young | Co-founder of Cartoon Saloon, an IFTA winner and Oscar and Bafta nominee. He produced the animated features The Secret of Kells, Song of the Sea, and The Breadwinner. Paul also produced two seasons of Puffin Rock, an original TV series which has been dubbed into over 25 languages.

» MASTERCLASS: The Truth and Myths of Transmedia Storytelling
Nuno Bernardo | Nuno is an award-winning and Emmy-nominated writer, producer and director and a bestselling book author. He created and produced Beat Generation, Flatmates, the Kidscreen Award-winner Aisling’s Diary, and the Emmy-nominated TV series Final Punishment, Beat Girl, and Collider.

» LECTURE: Polish Quality - How to Develop International Co-productions
Agnieszka Kowalewska-Skowron | Co-founder and associate at MOMAKIN, responsible for acquisition of films and TV content for distribution as well as programming for film projects and special events. She worked as advertising consultant, production and set manager for commercials and corporate videos.

» LECTURE: TV Programming and Media Psychology
Martina Peštaj | Martina is the Head of Children’s and Youth Programme at RTV Slovenija, where she has worked for a number of years as a creator, editor, and scriptwriter. As a Media Psychologist, she manages the Research Laboratory for analysing children’s programmes in different target groups.

» PANEL: Creating and Producing Immersive Experience
Marc Bertrand | Marc joined the French Animation Studio as a producer in 1998 and has since produced more than 100 films, including such notable successes as the award-winning series Science Please! (2001), Noël Noël (2003), or two Oscar nomination with Sunday (2011) and Vaysha the Blind (2016).
Uri Kranot | Uri’s work has expanded beyond the traditional: his art straddles experimental genres and unfamiliar mediums. He has been honoured with the top industry awards, including the Lumen and Fipresci Prize, the Oscar Academy shortlist and the Danish Statens Kunstfond award for the performing arts. He is also the creative director of ANIDOX with Michelle Kranot.

The selected PROJECTS and PARTICIPANTS for the CEE Animation Workshop 2018/2019 are:

The CEE Animation Workshop will continue with the second module from March 20th to 26th in Budapest (HU) and will concern production and financing. The last session taking place from May 3rd to 9th will be organized alongside the CEE Animation Forum (formerly VAF Třeboň) and will focus on accessing the market.

CEE Animation Workshop is supported from the Creative Europe – MEDIA Programme of the European Union, Central European Initiative, Ministry of Administration of the Republic of Slovenia, Slovenian Film Center and AIPA – Collecting Society of Authors, Performers and Film Producers of Audiovisual Works of Slovenia.