Cartoon D'Or is the premiere European award for the best European short animated film of the year. It was created in 1991 by CARTOON to both boost the development of European animation and to  counteract the lack of awards for animation in the major European film festivals (Cannes, Berlin, Venice Film Festival etc.).

Aardman's Nick Park (Wallace and Gromit) and Sylvain Chomet (The Triplettes of Belleville) have been among the past Cartoon D'Or Winners for their short films Creature Comforts (the first Cartoon D'Or Winner) and The Old Lady and the Pigeon respectively. Each year it selects 5-6 nominees, whose films have already received a prize at the partner European animation festivals.

4 out of 5 nominated films are produced/ co-produced in France.

Kiki of Montparnasse by Amelie Harrault tells the story of the unwary muse of major avant-garde painters of the early twentieth century.

Mr. Hublot (Laurent Witz & Alexandre Espigares, Luxembourg / France), recipient of the Academy Award for Best Animated Short in 2013 is among the nominees.

Another stop-motion entry, the debut short animation film by Eric Montchaud, Anatole's Little Saucepan (La petite casserole d'Anatole) is a sweet story of small Anatole, who is always dragging around his little saucepan.

The Slovenian entry (and the third stop-motion finalist) is Boles by Špela Čadež. Based on the short story "Her Lover" by Maksim Gorky, the puppet film talks about Filip, who lives in a poor neighbourhood and dreams of a writer's glory.

A letter that his neighbour and prostitute Tereza will make him write for her fiancé triggers an unexpected train of events.

Also have a look at the eligibile animated shorts that took part in the 2014 competition.

The stop-motion and Oscar-nominated Head Over Heels by Tim Reckart & Fodhla Cronin O'Reilly Roels won the Cartoon D'Or in 2013. The 5 nominated films will be screened during the Cartoon Forum, Toulouse (23-26 September 2014).

The Award Ceremony will take place on Thursday 25 September 2014 during Cartoon Forum in Toulouse. It will start with the screening of the nominated films in front of all animation professionals attending Cartoon Forum. The winner will receive a 10,000 EUR grant, thanks to the support of Creative Europe - MEDIA.

The Cartoon d'Or evening is sponsored by Région Midi-Pyrénées. 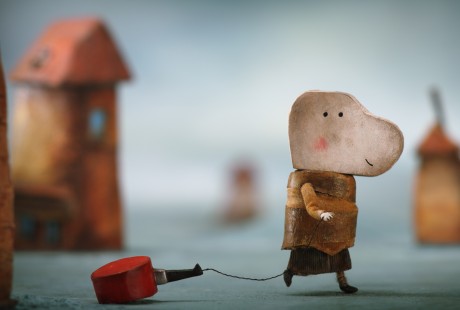