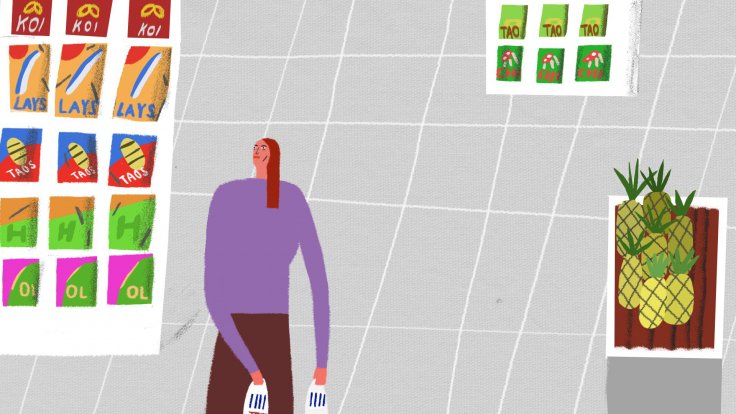 Taking into account the persistent moves of Hungarian Prime Minister Viktor Orban against immigration,  an animation documentary about immigrants in Hungary couldn't be more relevant. Budapest-based animation filmmaker  Borbála Tompa enlisted the support of journalist  Lucia Udvardyova (conducting and recording interviews) and made her own Random Walks.

We follow the story of five immigrants in Budapest, two of whom still live here as refugees. / We touch upon various levels of their life - from the banal to the serious.
In economic theory, "random walk" means that stock market prices cannot be predicted.
Each time, the price has a fifty-fifty chance of closing higher or lower than the previous day.
It means that we don't know how - or where the life of these people going further.

Broad-shouldered characters look awesome and impressive, but they are always in fences. Chequered patterns in basket boxes, rooftops and even T-shirts ensure that slogans like "sport", "universe" truth simply have a hard time to apply here. Trees become bars for people to walk among them, and pass from one cultural difficulty to another.

Even though it looks like cut-out, all character design and backgrounds were made in Photoshop (animation was conducted in TVPaint Animation Pro) .Random Walks narrates successfully the life stories of its characters, without imprisoning them in an overarching 'social' message, unlike both their home country and hosting environment.

Borbála Tompa is a Budapest based animation filmmaker and illustrator, and  a graduate of  Moholy-Nagy University of Art and Design Budapest. She've been working in many children shorts and series, and to clients as TED-Ed and The School Of Life. She was the member the Animation Sans Frontières program in 2017-2018