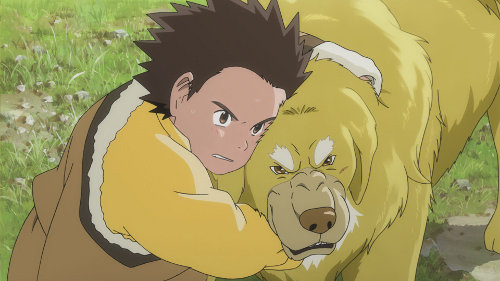 The Tibetan Dog is faithful to its title. It is a story of a golden Tibetan mastiff, who saves the young boy Jiantan, and it is constantly in focus throughout the 95 minutes of the Masayuki Kojima animated film.

Produced by the renowned Madhouse Japanese studios (responsible for The Girl Who Leapt Through Time and Summer Wars), The Tibetan Dog is a rite-of-passage story (remember The Circle of Life?) for a boy who has to move into Tibetan prairies after the death of his mother, and leave with his father, the busy doctor LaGeBa.

Jiantan is saddled with deep psychological feelings of anger toward his father (who did not attempt to save his mother) and discomfort toward the new, hostile environment. Still, he is the least interesting characters in the film.

His radiant hair might compensate for his ordinary personality, yet the burden of being characterized as unusual and weird does not match with his rather amiable character. Jiantan was bound to herd sheep and help his father in the medical affairs, if only the Tibetan Dod would not intervene.

The Tibetan Dog in his isolated peak feels as majestic as Simba in The Lion King. Like Simba, it is the real outsider in a universe of clear duties and moral obligations. The isolated Tibetan community has its own rules, to help their own and leave alone those who do not harm them. However, the Tibetan Dog clearly saves Jiantan and becomes almost a golden member  of the community. Still, he has to pay the prize.

The film mixes both supernatural folk legends (the Grandma face is the closest allusion to Miyazaki's films) with a police adventure story. The balance between these elements is not successful. The Tibetan Dog is accused of a crime it did not commit, but the real identity of the eminent danger in the community never becomes clear.

The subplot of robbers invading the village works well, as the public denounciation of the Tibetan Dog in the community court. Yet, the Tibetan Dog seems almost to be immortal -and the natural disaster ending does not make things any better.

The Tibetan Dog takes itself too seriously, and divides the world into persons who can readily overcome their deficiencies (like LaGeBa) and those who seem beside the moral code. Even though the plot is interesting enough, this sharp division somehow makes the film more austere (humor is sparse here) and less interesting than a more relaxed more code would allow.

The visual feel of the film is earthly, not intense; however, when avalanches arrive, it becomes superior. Even though there are fights between animals, few drops of blood are spilled, and the face of the monster will only be mildly menacing for children.

The Tibetan Dog is a solid adventure, which pays off in its second part. Still, its preoccupations with responsibility and rules seem somehow to distil any genuine feeling from its human characters.