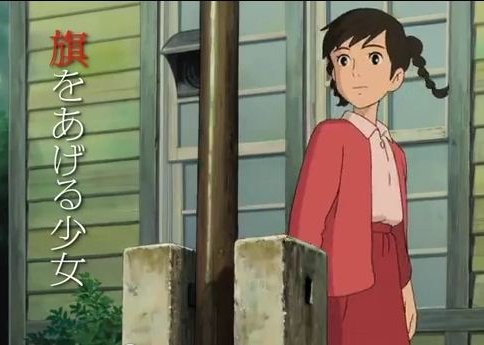 Goro Miyazaki (Tales from Earthsea) directs a postcard film to the Japan of the 1964 Olympics (not difficult to spot in the film, even though it only plays a marginal role).

Unlike his earlier adventure effort, From Up on Poppy Hill is a teenager romance filled with the values of tradition (and restoration, whenever possible).

Umi is a 16-year old girl who lives in Kokuriko Manor, a house over Yokohama harbour. She is the only person to raise a signal flag every morning. Her father has been killed after his participation in the Korean War.

The theme of the absent father is common in anime films (see, for instance, Children Who Chase Lost Voices). Umi in From Up on Poppy Hill, though, has the whole household (her sisters and granny) to look after. Her mother, a university professor, is also absent for an educational trip to the United States, and Umi is a hard-working person -from breakfast to dawn.

Shun is a boy whom we learn has also a turbulent parental story. He is the member of the Culture Club, housed in a old semi-derelict (but visually impressive) nonetheless, Quartier Latin. Like the tree of learning, Quartier Latin has departments for chemistry, archeaology, and even an existential student school of philosophy - its representatives are the ones to step outside of tact and 'proper' behavior.

Two narrative threads move the film. The first has Quartier Latin as the first building to be demolished by the school sponsor and businessman Tokumara. Students are able to refurbish it by their own means, and the outcome is easy to guess.

The second explores the chaste romance of Umi and Shun which is somehow hindered by a family revelation that concerns both. The nature of the secret is daring enough, but its narrative development is too hasty and easily resolved. You almost feel that Hayao Miyazaki (he co-scripted, along with Keiko Niwa From Up on Poppy Hill) blushed at the idea, and decided to shelve the only element that could cause genuine interest in the characters.

Leaving this aside, From Up on Poppy Hill feels like a well-designed, vintage but lifeless tribute to the 1964 Japan. Houses and manors are beautiful and reflect mild poverty, but they have nothing extraordinary that registers in the eye -let alone the unadorned sweaters and blouses Umi is forced to wear.

This is not to say that drawing is substandard; the wood in Quartier Latin is so well-designed that it almost leaves a smell. Even still, the nostalgic mandate of the film dictates single-handedly artistic direction.

From Up on Poppy Hill will entertain those (kids included) who want a serene, calm and neat representation of a culture who upholds its values. It never leaves space for anything else.