Cartoon Forum, the pitching and co-production event for animated TV series, revealed a steady stream of European animation at the 24th edition  of the gathering which ended last 20 September in Toulouse, France. 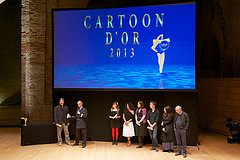