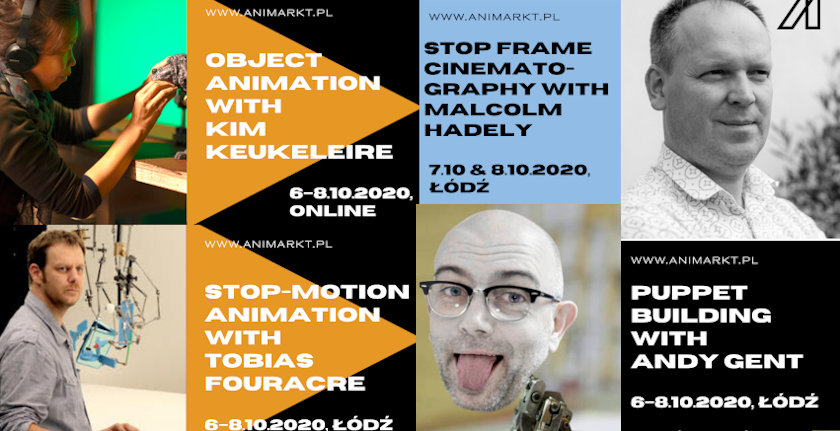 Kim Keukeleire, Andy Gent, Tobias Fouracre, Malcolm Hadley. The world-renowned artists working in Oscar-winning productions will be guests of this year's 5th ANIMARKT Stop Motion Forum, during which they will lead the workshops on animating, art of cinematography and puppet building.

The workshops, addressed to students and aspiring artists, are a traditional part of the Masters section during the ANIMARKT Stop Motion Forum. The organisers of the event, with the main goal of integrating the animation industry, prepare an extensive educational section every year.The workshops are free of charge, but there are several conditions for recruitment

Classes conducted in small groups are a great opportunity to gain knowledge from recognised animation creators and acquire new skills. The direct exchange of experience and the possibility of professional development is a great advantage of our event – she adds. The enrolment has just started.

The organisers have managed to involve the artists who have contributed to the success of the award-winning movies by Wes Anderson or Tim Burton, who also have vast experience in commercial projects. Among those professionals were: Andy Gent, puppet creator, called the right hand of Wes Anderson; Kim Keukeleire, animation director in My Life as a Courgette, who has also worked on the popular Chicken Run; Tobias Fouracre, stop-motion animator (animation supervisor in Isle of Dogs, key animator in Fantastic Mr. Fox) and Malcolm Hadley, British cinematographer with over 20 years of experience in making stop-motion films (e.g. Corpse Bride, Frankenweenie).

Those qualified for this year’s workshops on character animation with Tobias Fouracre will practice the various stages of work on all stages of shooting from the animators perspective: from the analysis of the shot, through the shooting a reference video, "blocking" or key-frame preparations for the shot, to animating the final shot. The result of the joint work will be two sequences of animation – one with dialogue and the other with the puppet's action.

For the first time at the ANIMARKT Masters there will be workshops on building an animation puppet. The 3-day class, under the expert supervision of Andy Gent, a renowned puppet and stage designer for stop-motion projects, is open to people with basic skills in sculpting, forming, as well as working with silicones and foams.

The organisers of the ANIMARKT, bearing in mind those who, due to the global epidemic situation, prefer not to travel in the near future, have also prepared a proposal for online workshops. During the three-day series of object animation classes, participants will meet with Kim Keukeleire, also known as Kim Kong. This stop motion specialist will inspire those who want to animate their choreography... with home tools or screws. In order to take part in the workshops, participants will need basic skills in stop-motion animation and operating the Dragonframe software. In this case, priority in qualifying for the workshop will be given to those who have their own equipment (computer, camera, etc.), to which the organisers will provide the latest version of the software for the duration of the classes, allowing for the performance of workshop tasks.

This year's programme of the Masters section finishes with classes on the art of cinematography in stop-motion animation. Appreciated for his creative and technical ability to combine acting with stop-motion and motion control elements, Malcolm Hadley will hold an intensive one-day workshop that will provide an opportunity to improve skills of working with camera and light while shooting stop-motion animation. It is an opportunity for people with basic experience in working on such projects both as a cinematographer, as well as a director or animator.

The workshops are another part of the ANIMARKT Stop Motion Forum programme, which will be held on 6-10/10/2020 in Łódź and also online. . The event received financing from the Culture Promotion Fund of the Ministry of Culture and National Heritage and from the International Visegrad Fund, and is co-financed by the Polish Film Institute.