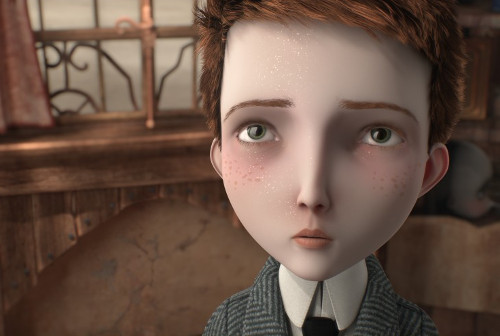 It could have been Pinocchio with a French twist, but Jack and the Cuckoo Clock Heart is more like an animated Romeo, and has its own charms and weaknesses.

Jack and the Cuckoo Clock heart is the brainchild of the French scriptwriter, director and musician Mathias Malzieu, who wrote the novel Jack et la mechanique du coeur (2007) and released a rock album with the same title.

Similar in 3D retro-style with Bibo Bergeron's A Monster in Paris, but more oneiric and music-led, Jack and the Cuckoo Clock heart (co-directed by Stéphane Berla and Mathias Malzieu) follows a young boy Jack (Orlando Seale), who is born in an isolated Edinburgh castle in the late 19th century.

Jack's only fault was his fragile heart (colder than ice) who had to be replaced with a cuckoo clock by a very skillful (and not at all horrid but eccentric nevertheless) midwife and witch Madeleine (Barbara Scaff). His real mother gracefully bows over Madeleine and her efficience; she leaves Jack with a bunch of likeable oddballs in Madeleine's castle, whose mechanics ensure that everything can be fixed and mended-even broken spines. Yet, Jack yearns for the world, and his fragile looks (the cutest face in the history of animation since Pinocchio) leads him into troubles.

In a witty reversal of the educational system, school becomes a source of liberation for the isolated Jack, but also the place where he is tormented and bullied by the much more efficient Joe  (Harry Sadeghi).

Yet, Jack's biggest fear is his own self, and whether his heart can stand the labours of love that the bespectacled dancer Miss Acacia (Samantha Barks) brings with her in their first musical moment.

A series of adventures follows Jack's disobedience of the three rules to meet his own Juliette, some real and some imaginary (Jack the ripper is the most entertaining of the film references).

The film has the modernity feel of an updated Romeo and Juliet story (and a real pun on Shakespeare's play with siamese two-headed Juliettes), and the design employs all the mechanical culture that a boy may find. The world of Jack and the Cuckoo Clock Heart may be filled with monsters, but this is not a French Nightmare Before Christmas.

The way the narrative goes ensures that Jack and the Cuckoo Clock Heart is to be rated as a musical fantasy, with less excitement and drama than the Day of the Crows offers, but more rock songs and the blending of dream and reality.

In line with Scorsese's Hugo, Georges Méliès now becomes another cinematic fashion; in this case, the animated pioneer director brings helpful advice to the bewildered Jack, who only wants to have the girl of his dreams, but somehow needs to find a more cinematic way.

The problem with Jack and the Cuckoo Clock Heart does not lie with Jack the character, but rather the series of very carefully prescribed events that accompany his fragile future, and which add no mystery and suspense to the initial premise.

The ghost train in Spain is extravagant, but only part of the setting. Miss Acacia is too easily manipulated than a real Juliet would have been; the interesting character, full of dilemmas and worries, is the midwife and witch Madeleine.

Animation is full of wonders in the film, and almost keeps the narrative pace by itself, making the characters likeable at first sight, and their shadings and night settings a romance in the making.

Music by Dionysus is a welcome rock addition to the Disney schmalzy canon, while humor is kept to a minimum into this story of a first kiss.