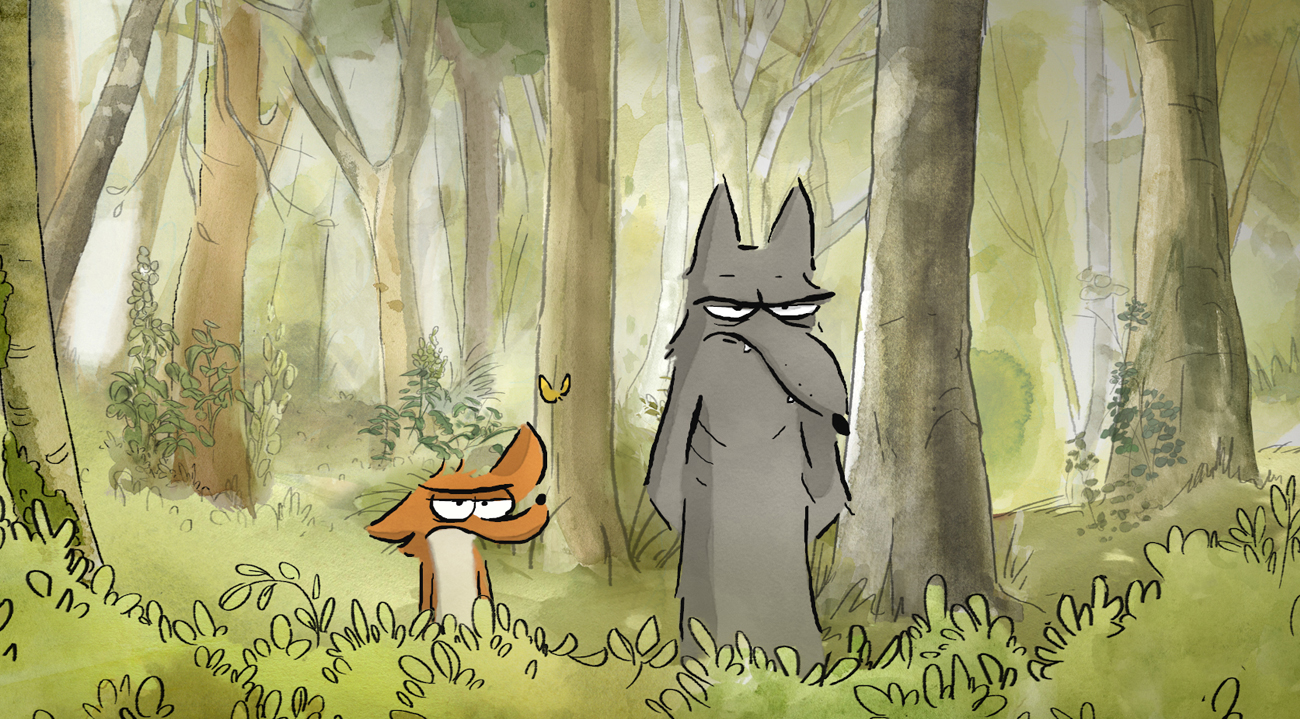 The Big Bad Fox And Other Tales Review: That's What Friends (and Enemies) Are For

Based on the eponymous graphic novel by Benjamin Renner, The Big Bad Fox And Other Tales (Le grand méchant renard et autres contes, 2017) is the next feature film from the Oscar-nominated, Ernest and Celestine director. A Folivari / Panique! co-production, the film finds Renner co-directing with Patrick Imbert (who was animation director in Ernest and Celestine).

In the manner of theatrical framing that Michel Ocelot introduced in Princes and Princesses (but totally unrelated in style and subject-matter), The Big Bad Fox And Other Tales is a 3-episode of roles and stereotypes, cleverly subverted, easy to laugh at, and a visual pleasure all the same.

Without the edgy outlook of Ernest and Celestine, but still within the 'role doesn't make the man' motto, Renner  and his co-writer Benjamin Regnaud sign a script that puts firmly the film in the animation for children territory - with a wacky character touch. Animal characters with no individual names ('The Fox, The Rabbit, A Duck) are meant to fulfill their alloted roles, but (surprise, surprise) they fail. The result is an alternatively zany and heartfelt film, which doesn't really make the leap from the fine to outstanding -but still has many narrative and visual pleasures to behold.

In the first story ('A Baby to Deliver'), a rather lazy stork assigns the three main characters (The Pig, A Duck and A Rabbit), all of them with cartoony, white eyeballs) to deliver a baby to its parents. An inventive series of tricks and outrageously funny transport choices follows, including car chases like the ones Peter Bodganovich used in his own What's Up, Doc? cartoony comedy. Humans are either indifferent or clearly hostile (the post office or hunting sequences) to the characters, which need to rely on their own camaraderie of sorts to deliver.

Thankfully, the watercolor backgrounds (another signature style item from Ernest and Celestine) are here used to embrace and protect the characters from their own follies. Looking a little bit unfinished and sketchy, they still carry the plot through from summer to winter in the 3 episodes, without outgrowing the character themselves and their own actions. Animals here deliver a more character-driven humour than their similar countepart in Alexey Alexeev absurdish Log Jam Series.

The best episode of the film is clearly the second one ('The Big Bad Fox'), where the eponymous Fox, an indirect descendant of Chuck Jones' Coyote, is clearly the epitome of human/animal frailty. The Fox is found in the most unpleasant condition; it needs  to raise the babies of its most terrible enemy, the Hen. The Fox (under the guidance of the Wolf) thinks this might work out in its favor (grown-up babies are a bigger pleasure to eat than small eggs), but eventually its own heart won't follow the calculated logic.

The script here makes a case for funny twists and surprises, which make the episode free from saccharine sentimentality, even if its outcome is clearly intended for safe children's viewing. Social commentary is not absent either;  scenes which emphasize what is to be adopted and what is natural is a theme that runs throughout the film itself. Renner and Imbert also give space to questionable community practices (here the funny but actually frightening fox extermination club community) to comment on the dangers of group conformist thinking.

Robert Marcel Lepage's music, which uses the kindred spirit of the Django Reinhardt  and its swing variety (' Le grand méchant generique') is somehow relegated to obligatory Xmas tunes in the third (and weakest) episode 'Saving Christmas'. Pig, Rabbit and Duck collaborate once again to restore the order caused by the accidentally killing of a (plastic) Santa Claus; along the way, they meet Fifou the dog (the only character named in the film, and the sign of indifference at the same time), and human cruelty to animals, always implied but not taking center stage.

It's always refreshing to watch children animation (and 2D animation in particular) that doesn't make children (or their animal avatars) superheroes, in order to tell an entertaining story visually. The Big Bad Fox And Other Tales definitely plays with the fairytale animal genre conventions (which won't subvert), and offers a much needed antidote to the hyper-programmed visual and narrative tricks of more mainstream contemporary animation.

The Big Bad Fox and Other Tales is produced by Folivari (Didier Brunner, Damien Brunner),  Panique !  (Vincent Tavier),/Studiocanal, and co-produced by RTBF / Be TV. The film premiered at the 2017 Annecy Film Festival (June 2017), with a wider theatrical release in France. GKIDS handles the rights for North American distribution, with an early 2018 US release in mind.