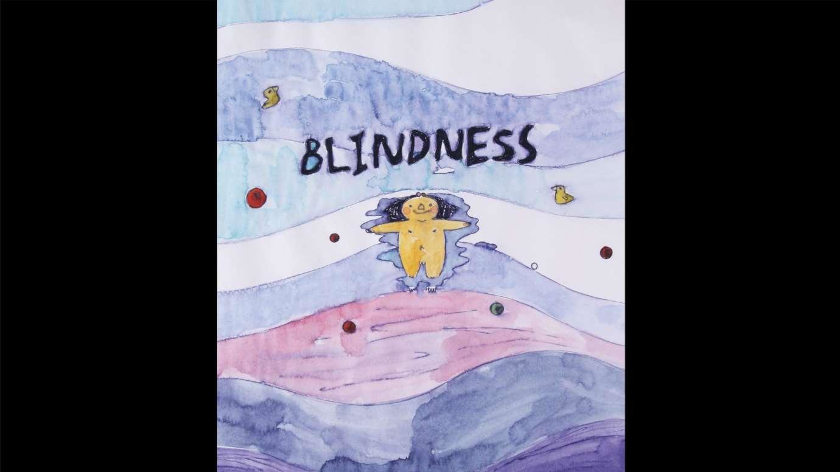 The film has a main character (called Muksun) fascinated by one scent and entering the monitor room. There was a very fascinating woman on the monitor, who gave her everything she wanted. The main character tries to reach the perfect monitor she can't reach, and she gradually loses herself.

We had a talk with Yu-Seon Park for Zippy Frames. 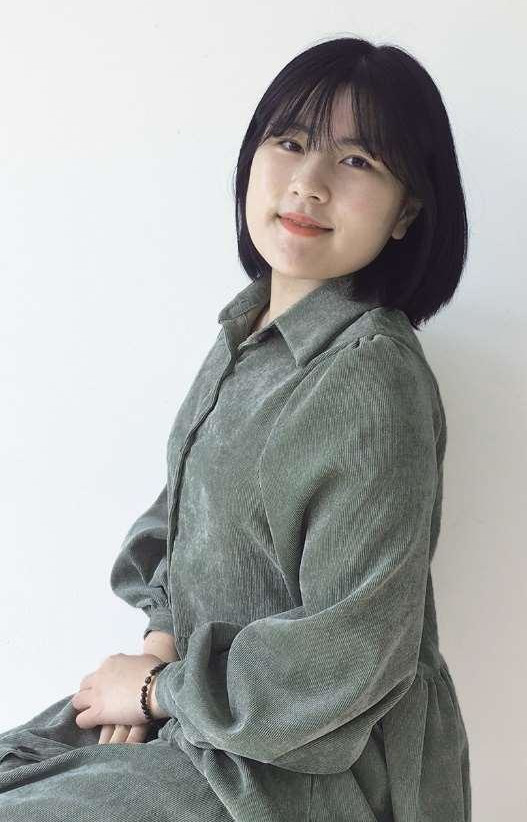 'This is a personal story but also a story that belongs to everyone', Yu-Seon Park tells Zippy Frames. 'As our exposure to media grows worse, we are forced to think that we must live a certain way. Where once I could be my own self, the bright and shiny media gradually chips away at my true identity'. Her 'Blindness' film is a story about the frame created by the media, and takes its inspiration from the overwhelming amount of media exposure -and turns it upside down. As she herself states, she wanted to break free from the conventional framing even in the image itself.

To do that, she used two different plateaus, one upper and one lower one for the same character, effectively a split-screen technique. "I wanted to show how the media takes over the main character’s innocent self in real-time", she comments. The vertical component suited her more for this purpose, so she placed her character in different horizontally aligned screen part, to make the media frame extremely appealing and compelling. 'The focus was placed on the bottom frame first, and then the top frame was placed on top of that later. Media is something unnatural, so it appears at the bottom and moves upwards, or backwards'.

The film is filled with familiar Korean characters, like the shamans, and also familiar animals, like a cat. The latter is also part of the media game, as she explains. 'Media lets us easily have what we want, and it also rips it away from us (though we may not know it). When the main character has many things taken away and falls into despair, the thing that brings comfort is the cat inside the media. This is yet another example of the media giving something to the character (in this case, comfort). It is an artificial form of empathy'.

The cat gives the character a taste of comfort, then becomes coy, leaving the character in uncertainty as it leaves in the other direction. The viewer also feels something for the cat, only to follow the cat deeper into the media. There are many animals, but personally I feel that cats have eyes that are mesmerizing, so they seemed well suited for this role in the film.

On the other hand, fish, another powerful symbol, appear in 'Blindness', as the original, innocent form of the character. The dialectic reveals the power play between the many characters encountered, and the power of the image itself.

Even though one would expect a slick computer animation design associated with the media frenzy, 'Blindness' is remarkably simple and raw in its visual qualities; Yu-Seon Park used water-based pens and watercolor, a mixture to serve the subject matter of the film. 'I think children’s pictures are very compelling', she states. 'Kids draw with rough and honest lines without worrying about what other people might think. I didn’t intend to draw a connection between the film’s subject and childlike drawings, but I think there is something adorable about the innocence of children. That thought naturally led to the idea of this film and the artwork which influenced each other'. 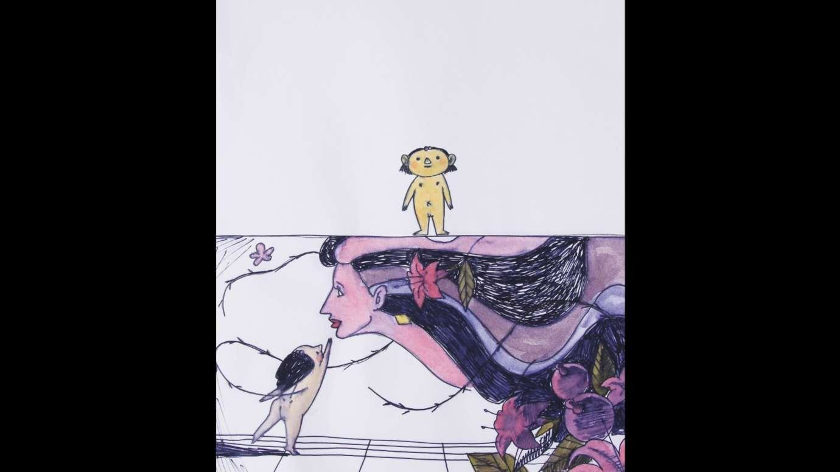 The film comes out as very planned in its visual scenes, even though the director states that her main goal was to turn Muksun into a media freak and a zombie -a character with an adorable past but an uncertain future. Her own planning in terms of production ('Blindness was her student film at Hongik University School of Film and Animation'; she graduated in 2021) took her three years. Her early themes of focusing on diet and women changed into this broader story that 'Blindness' is (supervised by school professor Calvin J. Lee, while consultancy on the ideas and philosophical aspects were given by school professor Se-hyuck Park, and professor Ho-sik Gang helped on technical aspects of sound). 'Since I already had a framework, the storyboard came together quickly, and I was able to finish it in the latter half of 2020. I was working alone, but I couldn’t shoot the pictures by myself, so I had help from my friend Hee-ra Ahn for the photography'.

The soundtrack (by Spearfisher) is pertinent throughout the film. 'I decided to get licenced music; instead of giving the animation and music equal weight, I wanted the music to serve as a garnish laid lightly on top. I chose music that was dark and soft without being mechanical. I added just a little sound that wouldn’t disrupt the mood. The voice is my own with modifications. I really did everything by myself!'

Yu-Seon Park confesses that it's impossible to know what problems will emerge during an animation production, especially during the pandemic period and a self-made project; loneliness, technical limitation or even physical obstacles. Yet despite these inevitable hurdles, the film shows a much relatable portrait of the image culture and our own place in it -and especially the placing of women in that framework.

'The women we see in the Korean media have big eyes, tall noses, long hair, red lips, pale white skin, and egg-shaped faces' Yu-Seon Park comments. 'Beauty is regulated as a singular form in the media. We who are exposed without a choice lose our own individual diversity and end up heading towards a singular point'. Even though the character in 'Blindness' is a young woman, the director states that this is a hard issue for women of all ages. ' Men also pursue the women that they see in the media as their life companions, but ultimately the ones who end up with miserable lives are the women of all ages'. Feminism seems to make us alert and avoid the pitfalls that can even run in the background without us realizing it. 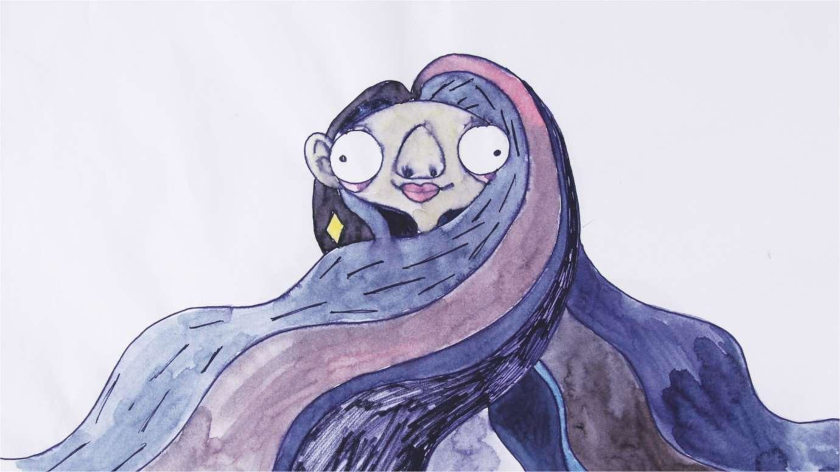 Yu-Seon Park confesses her multi-faceted ambitions in tackling genres like comedy ('I find that I can make people laugh'), and she's thinking of adapting the 'Blindness' story into a medium-length of feature-length format (most probably in digital animation). She's promised to give us updates on this -and we are most excited to do so. 'Blindness' is a much contemporary film, structured in a way to make it both simple and enchanting. We'd like to see more of that.

She was born in 1997 in Seocheon, South Korea. She entered (2016) the Hongik University School of Film and Animation, from which she graduated in 2021. 'Blindness' is her graduation film.