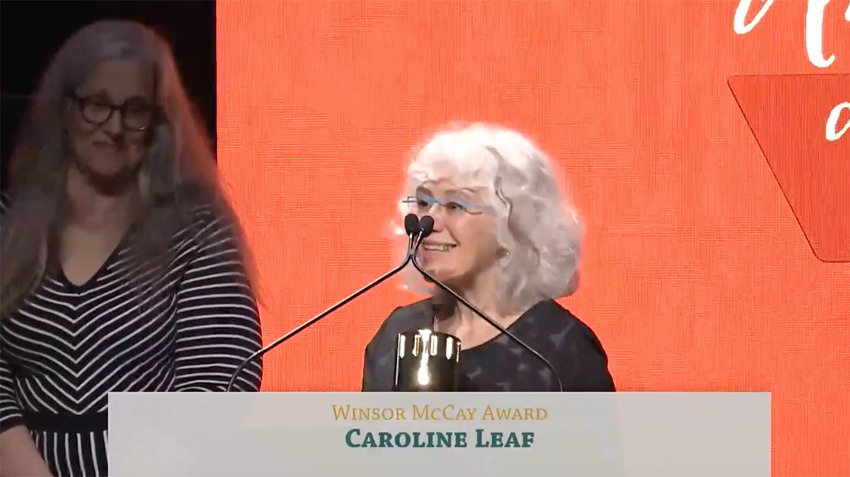 Caroline Leaf's unique work on sand and under-the-camera animation and very sensitive stories is widely celebrated in the independent animation world. In 2017, ASIFA-Hollywood chose her to give the The Winsor McCay Award during the 2017 Annie Awards. The award is awarded to a maximum of three individuals annually in recognition of lifetime or career contributions in animation profession.

Leaf began to make animated films as a student at Harvard University in Boston in 1968. In 1972, Leaf moved to Montreal at the invitation of the National Film Board of Canada--a publicly funded Canadian production center, renowned for its animation, which allows its filmmakers considerable creative freedom. She worked as staff animator/director at the Film Board until 1991, winning multiple awards and becoming a naturalized Canadian citizen in the process.

I remember very little formal teaching. I don’t think we were taught film language or editing. We learned to hot splice our original film shots together and make our own A and B rolls. These were days of film and laboratory processing, when you waited on pins and needles for the driver to return from the lab with the rushes, and saw what you had shot a week earlier. All my animating life I did not know how to make an edited cut, and found my way around the problem by making morphed scene changes. Some would say my animation is noteworthy for its moving camera and morphing scene changes. I credit my particular animation trajectory to the animation class, where we were left alone for the most part and found our own solutions. I loved the hours I spent hunched over a lightbox. There wasn’t structure or schedule but there was enthusiasm, and sharing, and energy in that basement room of the Carpenter Center, and we were carried away by the animated life we were creating - Caroline Leaf

The award was presented by Marge Dean, president of Women In Animation, and Head of Studio for Ellation Inc.. Caroline Leaf states that this is an award for independent animation in general: