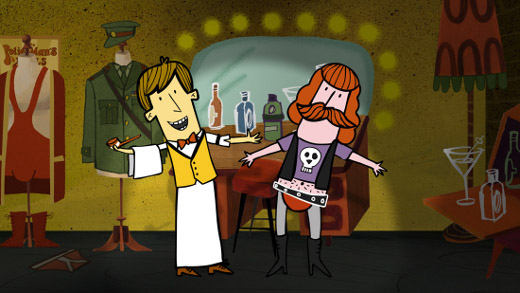 It would be hard to sell A Liar's Autobiography as a drama with a classical narrative structure (humble backgrounds -rise to prominence - sex and other deviations - fall and death). But who cares about description when you have a fake autobiography of a member of one of the most celebrated anarchic comic groups in history? Or should we?

A Liar's Autobiography is a collaborative project that delves deep into Graham Chapman's history, member of the Monty Pythons F* circus, who died in November 1989 of throat cancer. It includes the remaining Monty Python members (except for Eric Idle) voicing themselves and a lot of others (the Queen Mother as well).

This bold animated collective (14 animation studios participated in the project) has somehow managed to present a series of vignettes reflecting on Chapman's life which respect a classical narrative (even the dream navigator sequence is totally integrated into the realistic plot). Still, it is what happens inside each fragment of Chapman's life that matters, not between them.

The celebrated Oscar Wilde serves as an inspiration to move from rainy afternoons and boring family car walks into the seaside to the exciting world of Sigmund Freud and his dreams.

The Woody Allen textbook opens wide to include the master himself (voiced with gusto by Cameron Diaz); but this time the obligatory sex fantasies of adolescence (appropriately illustrated by means of roller coster) include a subtle variation in the Kinsey scale.

A Liar's Autobiography is more amiable than funny, and its one-liners don't stay long in the Id. But the atmosphere is electrifying.

Raunchy to the core, it has its best moments when music sets the pace.The "life can be fine if we're both 69" chorus (A for Animation studio) adds to a sense of anything goes in the gay world Chapman chose to inhabit (first detected in a completely pink and sheep-invested Ibiza). Class is the word that sparks flames of resistance. Apostle Paul needs to warn the New Zealanders against that tendency, in a film section that pays homage to the subversive (but not atheist) treatment of religion by the group.

Even coming-out parties have to give way to life problems, though. The drink issues Chapman faces are treated seriously, with affection and animated, totally realistic nightmares. In one of the most powerful film scenes, Chapman needs to fight against himself, and  be totally dismembered to survive.

From then on, vanity LA parties are meant to follow, having a magnificent, almost diaphanous, animating technique by Beakus studio -and many Hollywood stars in hangers.

The more live-action documentary scenes we're watching in A Liar's Autobiography, the more we suspect we're near Chapman's end -this one ends with a circle and a space trip.

A Liar's Autobiography is a documentary that never attempts to explain the timeline of the Monty Python success. It rather reenacts successfully a part of the spirit that fuelled this sweet anarchy.

Its rather meagre erudition in the talking department is counterbalanced by a palette of visual styles that repeatedly advises (with capital letters)"Show off". It would not have been a Monty Python comedy otherwise.