Panni Gyulai's graduation film was conducted in the Moholy-Nagy University of Art and Design (MOME) in Hungary. As the director herself states, "I always had a thing for heavy children stories, mixed with some fantasy and magic".

We talked with Panni Gyulai at Zippy Frames.

ZF: Was the storyline and the idea of the little girl and her abusive father always there from the start?

PG: At the beginning I was working on another movie. I didn't plan to make it so dark, the original story was quite different, but the picture of the monkey and the little girl and the fact that something is going on under the surface was there all along. So i was working on the script for a couple of months when i realized it's not the film I wanted to make… so i throw everything away except from the girl and the monkey and started to do the film with a new storyline, this time I didn't write a script, I drew a lot of pictures made a lot of designs and research and started out with the animatic, so i saw immediately what was working and what wasn’t. I was in the middle of making the animatic when I understood that the monkey is the father in the inner world. Fun fact, one of my friends had a dream about the monkey and the father character and it was her who made it clear how they are connected!

ZF: The father as a beast can be both a frightening thing, but also a stereotype on the other hand. How did you set up your scenes so as not to make him a totally evil being? Does he have his human moments?

PG: In the real world we don’t see him much, only that the kid is scared of him. But in the inner world she connects with this huge strange creature, who seems a bit scary and funny at the same time. The beast wins her over, gets her trust. But it’s true nature is there behind the scenes. He can’t help it, this is how he is. His mere existence hurts the girl, who needs to realize this and set her boundaries.

ZF: Would you return yourself to this environment as an adult girl, if you were in the place of your main character?

PG: I think you can’t go further until you face your issues. You go back, realize what happened, then you put down what you have to, and let yourself heal. It starts with accepting what happened. You don’t have to stay there of course :D

ZF: How did you design the world of your character? It's not exactly an everyday environment, but it's not total fantasy either. It's dark, but with sudden light (mostly red) colors. It's exotic in a way.

PG: I thought it represents the unconscious, and there are items from the real world like the tap and the plants from the balcony. The atmosphere is dark and vivid like the hidden emotions when you can’t speak up for yourself and you have to press everything down really deep 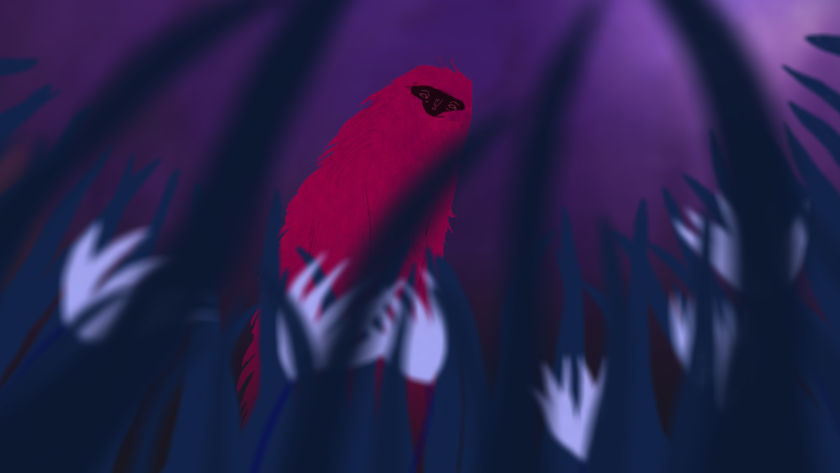 ZF: You have a lot of animals in your film. Any specific function for them or it made sense being part of a fantasy world?

PG: I think animals are the only beings who are entirely themselves, they never do anything that would go against their nature (except trained animals, who’s instincts were ruined by human impact); so, like the deer and the bug are somewhat innocent, fragile. The Monkey, on the other hand ,might have these qualities in the eye of the kid. She wants it to be nice and kind, but by its nature it is not.

ZF: This was your student film. How was the development and production process? Did you have people who helped you creatively, and how did the whole process moved from development (storyboards, animatic etc.) to finished film

PG: I had a lot of help from my University, especially my supervisor Rita Domonyi, she was also my scriptwriter. In the first half of the development, she was there all along to help me realize things about the story, the monkey and the girl. Then I had a rough animatic and, with Judit Czakó’s help ,we made it clear what happens so the whole story can have a universal meaning. And then the whole crew was amazing, this was the first time when I was in charge and had to cope with every detail, make sure everybody has a scene to work on, consult with the sound designer, the vfx artist, the animators and so on. It was very tiring, a lot of work, but I enjoyed every moment of it! And I'm really grateful for this opportunity, it was fun

ZF: Do you consider the fantasy world we create a good or a bad escape process?

PG: It depends on the person and the situation. It can save your life but it also creates a gap between you and reality and you will find yourself after years of hiding, in a world you don’t really know. So no I don’t think it's a good process, but in some cases it is necessary, it’s a paradox, but it can keep you sane. 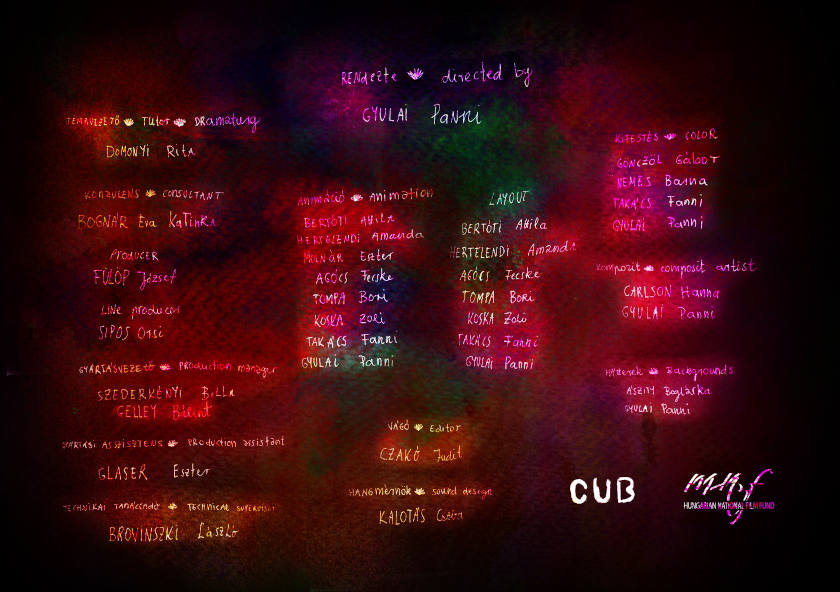 Film Review (Vassilis Kroustallis):
There is an organic succession of fear, disgust, curiosity and terror in the eloquent coming-of-age story of Broken Things by Panni Gyulai. The director adopts the viewpoint of a girl who needs to go beyond her family ultimately dreary (and sometimes violent) life; arrays of darkness fill in the film backgrounds, and bright reds undertake the need to light up the surroundings. The interplay between big and small, between prey and hunter, looms over the film; inactive means being a plant, and even flowers constitute a meal.  The Monkey itself is drawn like a big patch of unruly sentiment, ready to crash the girl's expectations. In an environment where enclosure, escape and return is all part of the same story, Broken Things offers a dramatic, intense and really poignant tale of not letting go -and its consequences.

About Panni Gyulai
Panni Gyulai is an active animation and fine arts professional in the Budapest area. She graduated from Moholy-Nagy University of Arts and Design of Hungary in 2018 and works as a freelance artist ever since. She endeavours to tell a personal narrative through her work. Translating a variety of artistic skills both her solo and collaborative projects.