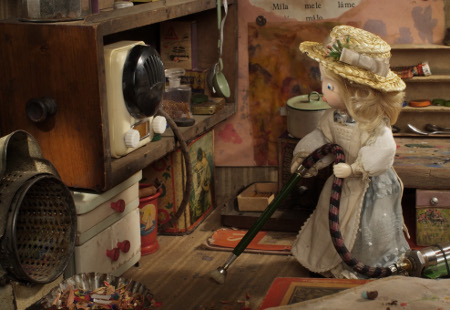 Made by the Czech director Jiri Barta of the dark Krysar,  this film is the European answer to Toy Story. Its actors are dolls, pencils and beer cans in a rather dark children's adventure. The film has already begun to get noticed in international festivals (including the New York Children's Film Festival).

Old toys live happily with one another in a house attic. But close to them, the Land of Evil (and a Big Head) decides to abduct their favorite friend, a female doll. Adventure begins.  Watch the trailer here

Jiri Barta's visually old-fashioned In the attic may be, but it is also extremely inventive. The successful and multi-tested topic of the toys that get a life and face adventures is not novel - Pinocchio did it, Toy Story still does it.

But In the attic or who has a birthday today uses a different visual form. Dolls, pencils and every little bit of object move in an action movie tempo, all of them in a film that involves narrative reversals. The early doll abduction becomes a false alarm, whereas danger lies in unexpected places.

Barta's inventiveness includes pillows, sheets that represent storms and tempests, all these being enclosed by the confines of an attic. The story is the one of a friendship in danger, but with more sinister insinuations that Toy Story would allow. Its atmosphere relives the World War II - it's enough to have a look at the airplane.

This retro style and the do-it-yourself attitude heightens the film more than its predictable ending. Don't miss the plasticine-made Schubert.