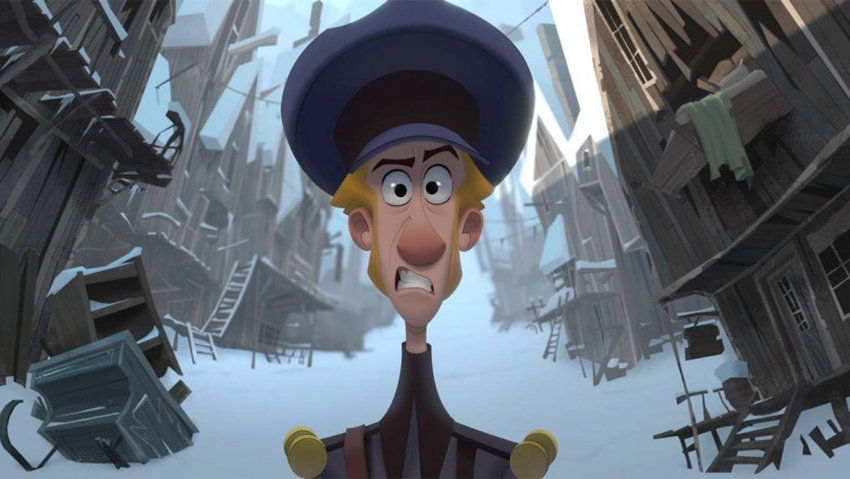 The recently celebrated Klaus film by Sergio Pablos has both in its storyline and mandate two aims: the first, to step back to narrate an origin story for Santa Claus (and an origin story for 2D animation as well); the second, to teach that learning can stop all feuds (and also that 2D animation has still a place in the 3D computer-dominated world, and in fact, the two techniques can co-exist harmoniously).

The independent animation world has constantly raved about Klaus and the way it uses its 2D tools to create a 3D volumetric feeling (more info here). Praise is not unfounded, since Klaus is a film tinged in nostalgia itself, from the way it handles its storytelling to lighting and compositing.

There are things to admire and things to cast aside in this purposedly driven hybrid of US and European storytelling. A neurotic but also bored rich family's son Jesper (a really pleasant Jason Schwartzman) needs to past the litmus test of cutting the umbilical cord from his rich family (think of Claudette Colbert in Capra's film It Happened One Night and its many reincarnations). He has to move from his Berkeley-style rich endeavors to the Arctic circle island of Smeerensburg (the Dutch Smeerenburg), an expressionistic-looking habitat of nasty citizens and fenced houses (kudos to production designers: Szymon Biernacki and Marcin Jakubowski.)

Jesper is designed and looks like a composite of Aladdin and his monkey Abu: he is agile, finely animated, and reminds us that the Disney Renaissance characters always talked too much, to the point of confusion. He is paired with a giant Klaus (J. K. Simmons), an almost silent, desperate old man with his own backstory to tell, and a lot of toys in his own closet. Alva the teacher (Rashida Jones) is resigned to being a fishmonger in a place where feuds never stop, and the vendetta between Ellingobes and the Krums is on its way (Joan Kusack as Mrs. Krum is a delight to hear, whereas her design is a delight to look at as well).

The menagerie of unlikable characters would suggest a Tim Burton Xmasy film otherwise, yet Pablos insists on not making things grotesque, or frightening; just unpleasant enough for the two main heroes, Jesper and Klaus to step beyond them and form the necessary bonding for the story to progress (the love affair between Jesper and Alma is here perfunctory and serves absolutely no purpose than cement a happy ending).

The film needs to pull all its different strings (the Klaus origin story, the feud) together, and it succeeds to a point. Its middle act, after the initial toy plan is hatched and executed, has many false restarts, but the chase scene is really adequately executed. Pablos does well not to rely on spectacular VFX and showy camera turns, but focus on character storytelling -it serves the film better.

This is not a laugh-out-loud comedy film (and that's a compliment), it's not really understandable why wannabe pop hits have a place in an otherwise interesting score by Alfonso G. Aguilar, except to slow the film's tempo. Not all characters register in the same way, and Klaus both in design and function seems more like a big toy for Jesper  rather than an independent character himself. Children (apart from the Sámi girl, who speaks her own language) have little time to register their desires and wishes to Santa Claus. But as a tapestry of characters led by Jesper, Klaus makes a valuable point in not having superheroes as the only kind of main characters in an animated film.

Visual tapestry also holds the film together; the angular character design is fine, but nothing beats the evening yellowish and greenish hues, which seem to foreshadow everything else in the film (the best visual moments appears when the skies are not blue). It's like a certainty being drawn on us that variety in animation is king, and it is well made.

Klaus is a sincere attempt to remind in the big animation world what 2D animation is. Its tempo is uneven, yet the film is never offensive to its characters, and relies mostly on storytelling and a back-to-basics visual style to achieve its aim rather than marketing sensibilities. Santa Klaus has now his own prequel.