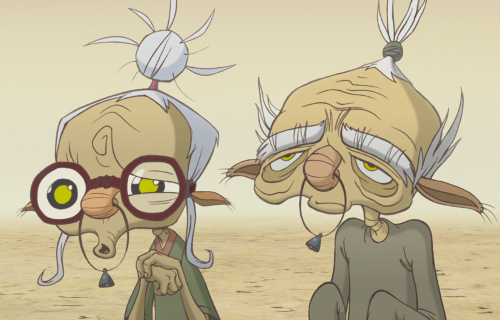 Ku! Kin -Dza-Dza might be the name of a galaxy in the 2013 Russian film, but it steadfastly adheres (with the expection of a minor, bluish and dreamy diversion) to a single planet, Plyuk.

Being a remake of a celebrated steampunk 1986 satire (who did not use the all-purpose-serving Ku word in its tile), Ku! Kin-Dza-Dza is directed by Georgiy Daneliya (also a director of the 1986 live-action film) and Tatiana Ilyina. Produced by UGRA Film, it had a turbulent production history, finally appearing in the Russian screens in 2013.

The film offers a contemporary reworking of the Antz (1998) hierarchical societal structure, where inhabitants are classified according to the color of their pants. Yet whereas Antz focused on the well-functioning system of a society which suppresses the individual, Ku! Kin-Dza-Dza relegates action to the structure's demise.

The world famous Russian cellist Vladimir Nikolayevich Chizhov and his great-nephew Tolik are stuck together when they accidentally dial the number of the Plyuk planet in Vladimir's cellphone. They are both magically transformed to an almost deserted, certainly primitive environment which reminds of Wild West with locomotive engines in a desperate need of fuels.

Vladimir is at once characterized as a member of the Russia intelligentsia. A high-brow, middled-aged virtuoso who prides himself on being all the things cultural (and has a pink bow tie to confirm it), he still has made a mess of his personal life -and jokes abound about him, both in the crowded Moscow and in the less-populated Plyuk. Difficult to adapt and easily deceived by his own grandeur, seems the utter antithesis to the wannabe-hipster DJ (but really likeable otherwise) Tolik.

The odd couple will need to reexamine their national identity, habits, and even language. They will both be identified as Patsak, a socially inferior group of the planet compared to Chatlanians -and the long-held clashes between Russians and Chechens will take a different turn here. Plyuk vehicles need matches (translated into ketses) to fuel their engines.

Uef and Bee, the two main companions of Vladimir and Tolik in the planet (and the most developed comic characters in the film) will alternately guide and betray Vladimir and Tolik, effectively treating them as bearers of ketses and nothing more.

The undifferentiated word Ku which signifies almost anything -apart from the police, of course, and the swear (which is Kyu, pronounced as kyew)- reflects the homogeneity in the hapless incidents the characters face in order to return to Earth.

With a Cordell Barker feel for visual adventure, the magnificent empty desert setting (Alex Andreev being the senior concept artist) is suddenly loaded with cooky characters, which either obey or dominate but never help.

Being a comedy, the absurdity of Ku!Kin-Dza-Dza is most welcome, even though the contrast betwen the high-profile intellectual and his acquaintances soon wears out, and the cello jokes are not really the ones that matter here. The relationship between Vladimir (affectively called Uncle Vovo by Tolik) and his nephew will follow a prescribed trajectory from distrust to understanding and mutual help.

What really registers is the vastness of the field and the mere appearance of characters, such as the one-eyed metal Minion (call me Abradox). Unlike the current thread of Shrek-influenced animated features, their presence and grotesque apppearance is not played for sympathy.

Ku! Kin-Dza-Dza is a place where grannies are heartless (apart from being musically illiterate) and clowns relentlessly manipulative, but also a place where the recycling of adventures threatens to diminish any comic novelties.

The film's warm color palette mitigate the harshness of the humanoid environment, and make Ku! Kin-dza-dza an affectionate film to watch, echoing in visual style and setting (but not in  narrative treatment) the Oscar-awarded The Lost Thing in  Yet, Ku!Kin-dza-dza would benefit from an escalating absurdity in its narrative.

Russian director Nikita Mikhalkov has proposed that Ku! Kin-Dza-Dza should be the Russian submission for best foreign film at the 2014 Academy Awards. Being an adult-oriented animated film (but can be watched safely by kids as well), Ku! Kin-Dza-Dza references Russian politics and a culture of modernity gone astray. It would have more chances by entering the terrain of foreign-language, Academy Award submission than the animated feature race, which almost exclusively concerns itself to a certain demographic age group.