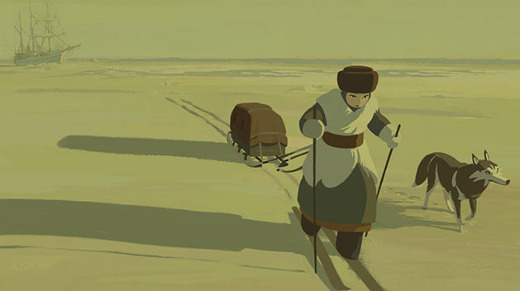 They don't make films like they used to do - or do they?

But whereas The Painting insisted on a party of colours and narrative complications, Longway North (Tout en haut du monde) concentrates on a single story and a more minimal color palette which, however, is taken into almost epic proportions.

In the 1892 Saint Petersburg,  Sasha, a young Russian aristocrat, admires her grandfather, a renowned explorer who designed a magnificent arctic ship, but he hasn't returned from his last expedition to the North Pole.

Escaping from her family, the 16-year-old Sasha embarks on a dangerous journey, and heads towards the Great North, in search of her grandfather's famous ship.

This is the kind of a story thread that could have brought John Huston in exasperation, for theopportunity to film where no one has dared to film before.

Rémi Chayé seems to follow in his footsteps, brushing away the initial set-up of the 1892 aristocratic St. Petersburg (curiously unadorned in the film)  to concentrate on the most exciting part of the journey.

This is not to say that the first part of Longway North is unimportant as is. Treacheries by Russian princes, faux conventions from her parents and empty words of honour torment the free-spirited Sasha who, like Merinda in Brave needs to find her own voice.

But, unlike Merinda, the blond Russian will also rework her 'domestic' duties (from an austere but good-hearted pub owner) while ashore in exchange for her chance to go and look for her granddad.

This is the kind of adventure that Huston would celebrate in his The African Queen, where the characters need to transform in order for the adventure to begin. And the supporting characters in Longway North, the grumpy but capable captain, his easy-going but unreliable brother, and the petit love interest of Sacha, Katcha compliment in more than one ways the trip that is about to begin.

It is not easy to attempt a spectacular adventure in 2D animation nowadays. What Rémi Chayé accomplishes here (also in the art direction chair) is leaving out all unessential details -also in the character design- for a more comprehensive view of a world that only works in white, green and blue.

There are no easy gimmicks or spectacular situations only addressed to the eye pleasing factor in the film. Instead, wonder comes both from narrative (as danger approaches, human relationships go awry) and camera movements between shots, whose piecemeal view of a world in white chaos helps bulids a mental image of silent despair.

Longway North follows closely the conventions of classical storytelling (so, we know that a happy ending for Sasha must be forthcoming in some way). And this is no mean achievement, considering the lacklustre plot of many family-oriented animation films.

It works on a simple motif, which makes the less than detailed character design justifiable enough: the human need to excel its own mortal status, and learn the unknown. The superb visual design and colour contrast fuels this search, and animates the characters more than any unnecessary sidecick.

Animation can do miracles in transformation, but the need to make a realistic animation feature that in turn moves the imagination is no easy task either.

This is what movies used to do, and this is why Longway North deserves a wide audience.