The tradition of having at least one European feature animation among the Academy Award nominees held strong again this year.

After the 2014 nomination for Ernest and Celestine, now it is the time of Irish director Tomm Moore  to lead.

It's the second Academy Award nomination for Tomm Moore, after the 2009 nomination for The Secret of Kells. His poetic Song of the Sea  produced by Cartoon Saloon mingles folk tales within a human drama, and a 2D sensitivity.

This European feature is up against strong contenders.

Disney's Big Hero 6, The Boxtrolls (the third Academy Award nomination for LAIKA, after Coraline and ParaNorman) and the office box-office hit How to Train Your Dragon 2 (Dreamworks) are also nominated.

The US film that could have been there is The Lego Movie.

Despite its initial push (it won the National Board of Review and New York Film Critics Circle awards for Best Animated Feature), the film was left out from the final nominees' list.

The Lego Movie  is nominated, however, in the Best Original Song category, for the song "Everything Is Awesome".

The fifth place in the Oscar nominees is well-deserved. The veteran Isao Takahata (along with Yoshiaki Nishimura) are nominated for another tale and 2D, hand-drawn effort.

The Tale of the Princess Kaguya, the dramatic and lyrical story of a girl found among bamboos, is the latest offering from Studio Ghibli, which again enjoys an Academy Award nomination, after Hayao Miyazaki's nom in 2014 with The Wind Rises.

The short animated film category includes the Cannes-awarded The Bigger Picture by Daisy Jacobs (NTFS, UK), an animated short about two brothers struggling to care for their elder mother .

Disney's Feast (dir. Patrick Osborn, head of animation in Paperman) was a sure bet and a story about the man's best friend. Another US entry is "The Dam Keeper," by Robert Kondo (Ratatouille, Toy Story 3) and Dice Tsutsumi (Ice Age). They co-direct a 18-minute animation short about a dam keeper in a desolate city of the future.

An Oscar winner, Torrill Cove (The Danish Poet) competes with National Film Board of Canada with the fish-out-of-water story "Me and My Moulton".

The Dutch entry "A single life" by Joris Oprins is a surprise nomination about a single female who suddenly seems able to travel through her own past and life.

Bill Plympton was left out from both feature film category (Cheatin') and short animated film (Footpriints), and the masterful feature Rocks in My Pockets by Signe Baumane did not find the attention among the animation branch of the Academy

The 5 nominees for Best Animated Short:

Academy Awards for outstanding film achievements of 2014 will be presented on Oscar® Sunday, February 22, 2015, at the Dolby Theatre® at Hollywood & Highland Center® and televised live on the ABC Television Network. The Oscars, produced by Craig Zadan and Neil Meron, also will be televised live in more than 225 countries and territories worldwide. 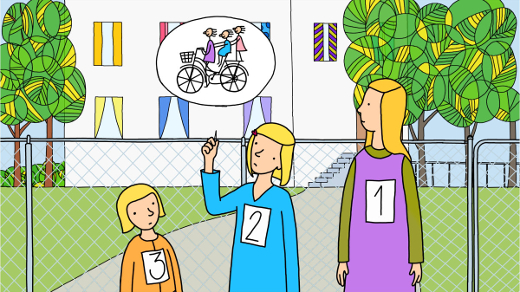 Me and My Moulton, Torrill Cove