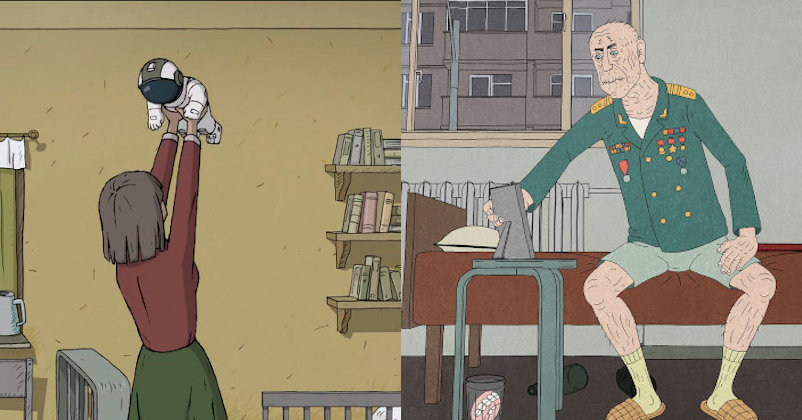 Not very often we can and take an effort to look at animation and even at auteur one in particular, in terms of ‘content analysis’, more or less, attempting to see certain ideological shifts and/or sociological realities through the patina of narrative and style. And once in a while some films standing side by side in the festival program(s) seem to present – either by programmer’s intention or mere occasion – a meaningful juxtaposition, striking sparks of reflection.

In Stuttgart competition, two entries, He Can’t Live without Cosmos by Konstantin Bronzit and Cosmonaut by Kaspar Jancis (both marked as of 2019) illuminate each other in a peculiar way (and perhaps moreover so – against the backdrop of a curious ‘cosmic’ sub-genre which seems to start proliferating recently). Bronzit’s film appeared in festival circulation and probably was ready a bit earlier, but it’s still hard to imagine that Jancis might’ve seen it or known much of preliminary details while working on his own project.

At the same time, it’s similarly hard to shake off the feeling that here is the case of almost direct, and polemic, response – even to the degree of clear visual-narrative rhymes (as Bronzit himself admitted, in private correspondence, he was stunned to bump into those at watching). What Jancis must’ve had in mind, though, is certainly the first film of Bronzit’s indistinct dilogy, We Can’t Live without Cosmos (2014). It got then, let’s remind, wide recognition, up to Oscar nomination, and rather extensive press coverage, domestically and internationally; reviews largely dweled on lighthearted humor and touching dramatic moves, reaching to deeper layers in the story of life and destiny of two space team buddies; and in that reviewers seem to follow director’s claim: it’s not about cosmos, it’s about friendship.

What remained somewhat overlooked, I suspect, were broader connotations, even if not so explicit. Deliberately or not quite so, in a certain way it’s generally framed as a ‘Soviet retro’, albeit of a soft-light variety, a bit ironically distanced, yet still a warmly forgiving homage to the glory and pathos of the era of brave and noble exploration, and also indeed of space race, though perceived here not that much within the Cold War context and within the grand-myth of state propagandistic aura, but rather as interiorized spirit of the time, with a sense of belonging to national history being reclaimed. That shows not only in telling details of training, and bureaucratic or even propagandistic routine around, with lightly ironic touches, or in marked stylization of design, but more importantly – in the very underlying discourse of specific romantic nature, cultivated through 1960-70s. After all, the very cult of friendship, akin here to brotherhood-in-arms, with all its (self)sacrificial overtones, is also from that cultural thesaurus.

These motives were expressly present, be that in rather crude and straightforward manifestations or not, in classic-mainstream Soviet animation of cosmic theme, along with live action of the similar order. On the other hand, at the cusp of times, in late 1980s – early 1990s, the same traits and their metaphorics would be among the first in line to become the stuff of liberating sarcasm. Thus, Pilot studio, the first independent one in the country, where Bronzit was schooled and where he developed his early overarching humor in dynamic gag buffoonery, had in one of the beginning almanacs of shorts, Lifts [Elevators], a miniature, conditionally titled Sputnik (directors Yanis Freijas and Vladimir Sakov, 1992), a straight-from-the-shoulder parody on triumphant space launch where the sacred figure of heroic cosmonaut would be jeeringly reduced to just a head inside the metal ball, with the only function-destiny to produce the famous ‘beep-beep- beep’ call signal through the lips stretched in enthusiastically-foolish smile… Well, times and tones change.

By 2014, at yet another watershed of the history-in-the-making, Bronzit’s piece was able to absorb the mood in the air wholly enough to fit in with seemingly all the sides of the newly hot, even if semi-articulated undercurrent debate on the past and the present. Instead of Oscar out of reach, soon after he receives a state award (given not without an implicit ‘patriotic’ nod, as it may look); at the same time being justly praised for artistic merits and inner message by the professional community and involved circle, at large of much more ‘liberal’-critical orientation.

In the second installment, Bronzit tends to dwell much less on the emphatic marks of time and place, and social reality they signify, striving for universality, trying to distill the stage on which the existential tensions are to be played out. Yet, the basic traits of life and people living it are still quite recognizable. 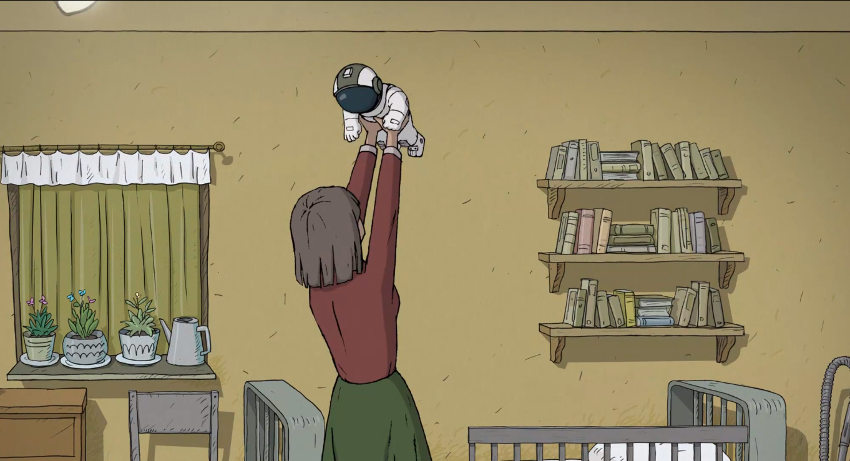 Moreover, the underlying mythology, I’d argue, remains principally the same; the late-diluted romantic concept of the human identity, in particular. Besides, the pathos of hard-to-extreme work as moral obligation, the prevalence of duty in the destiny, visceral sense of responsibility in front of the others, depending on you fulfilling your part in earnest – these and other basic values of the ‘moral codex’, as it was labeled in former times, are still here. As well as the design of the similar simplified fashion, referencing the fundamental stylistics of the bygone era (including, as before, disctict manner of illustrations to Soviet children’s literature). All that makes throw-out, umbrella metaphor here strangely or richly ambiguous, pregnant with various implications. Packed by birth and choice into the full- fledged and zipped space-suite together with light-tight helmet, the character-figure itself and all the soft gags played around it don’t really look conventionally funny, as expected, or just a bit so, rather sadly weird. And inevitably, immediately symbolic, for better or worth. We are free to decipher this symbolism at will. As protective armor for vulnerable self, a materialized image of loneliness or alienation, be that of mother and childhood hurdles, or else.

But besides the rest, it’s first of all what it is, taken at face value: an inherited uniform, and not just from absent father – presumably perished in heroic space conquest – but from that historic struggles as such. Take it even as a caricature, a rather gloomy one, of ‘heritage’ at large, in this particular theme and its traditional imagery, or/and in broader socio-cultural sense. (Besides, beneath that lies yet another heritage motive, of deeper cultural roots: a ‘machine-human’ hybrid pattern which informed much of ‘revolutionary avantgarde’ of 1920s and then was semi-revived in new times, especially in monumental art, sculptures and such, of space theme in particular.) However, closer to the present, this core metaphor might also turn in an unexpected facet: isn’t it also a statement of privacy, a reserved-secured space for/of an individual existence and social standing – and more, an escape capsule into safe haven, away from hopeless order of things around. Bronzit might’ve again sensed, unwittingly but precisely, the background noise of the moment, when the old intelligentsia’s notion of ‘inner emigration’ becomes actualized anew. And freshly meaningful would become a soft-core exploration-revision of values: look at subtle interplay between domestic and planetary, family ties and deeds of duty: like mother’s mortal care – scarf packed in tool box instead of needed instrument… Characteristically, Bronzit now would obliquely reference – especially against the backdrop of the reviving space-race-exploitation genre in officially commissioned/promoted live-action – different points in larger film culture, broader cultural memory: say, Tarkovsky’s Solaris.

It feels like Jancis starts exactly where Bronzit ends up, or even meets him halfway. And he as if methodically, one by one, tones down all the things involved. Not coming-of-age narrative, to the point of re-birth, but a snippet on hopeless-miserable old age, to the sore- pitiable end point. 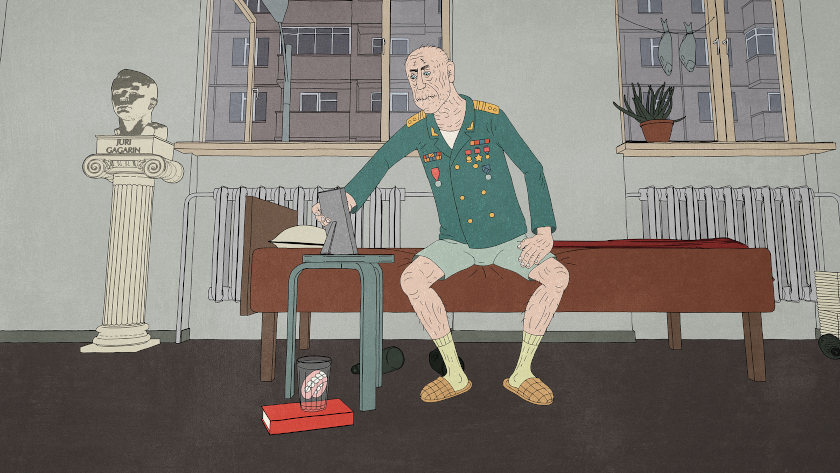 Not a picture of unconditional, if only awkward, mother’s love and son’s late awakening to the same, but a snapshot of broken-dead daughter-father link, and so force.Oh, yes, here is also an irremovable ‘space-suite’: a scruffy officer uniform jacket that the old man wears even in sleep. And that’s, keep in mind, definitely a Soviet army attire. The archeology of the era tellingly materializes in a line-up of models-toys of spaceships, rockets and famous obelisks on the book-shelves, they would be constantly in clumsy play, every moment about to fall unless fixed in place again and again – and it’s exactly one of those that would finally deal a fatal blow to the poor fellow, crashing down from the top as if in emergency landing. A sad joke indeed – and a pointed one.

As are most gags here, edgy and biting, with peculiar dramaturgy of pauses and slow bursts, so characteristic along with craggy design of a particular variety of Estonian school where Jancis belongs. The same goes to the very attitude, perhaps, to the somewhat tired, yet persisting sensation of post-colonial pains. The dubious tribute to retired pilot of Soviet space force frames into deconstruction of mythology of his times and deeds, destined to dissipate together with the power that brought them to being. When this cosmonaut flies his final open-space round (in pre-mortem dream, no less) and looses the safety rope – a life line indeed – that reads, surely, as a touching metaphor of human life passing away, but also maybe as an emblematic farewell to the historical-geopolitical 'mother-ship’. And to the generation(s) of guardians or victims, who held the ties, if only in fading memory lately. The toddler in the final coda would look up into the open sky, watching the comet’s or rocket’s contrail, not it’s replica in the model-figurine.

In all the fairness, both films go above and beyond those implications. Jancis’s piece might look uneven with its a little convoluted manner, though perhaps the sketchy zigzagged narrative adds here some allure; Bronzit’s – in turn, veils on a strong note some vague kinks under emotional flash. And both – strive for farther frontiers, not of space per se, really, but rather of human condition.

To add on to the context a bit: in Russia, there are already witty parodies on Bronzit’s saga – for instance, in this extra short by Alexandr Bubnov (from 5-sec omnibus-festival, recently developed in Russia, 2020), where the familiar figure would just appeared late to the launch; or gently humorous attempt on yet another de-re-construction of cosmic myth through the lenses of ‘modern folklore’: About Our Astronauts, (director Galina Golubeva, 2018). On the other hand, and in an other environment, French students would characteristically employ the space-suit trope to embody quite a different quest: a job search and socialization of the unemployable introvert youngster (No Gravity / Sans gravité, 2018). Further incarnations of the theme and its metaphorics are yet to follow, most likely.

About Mikhail Gurevich:
Independent scholar and critic, born in Moscow, Russia. Writes on literature, theater, film and culture at large, with concentration in animation, puppetry, and experimental theater and cinema. From late 1970s was actively contributing to major cultural publications in Russia; later edited independent periodicals. Worked as expert-consultant for professional associations and studios in theater and cinema. From 1992 lives in USA. Wrote on animation in particular for professional and academic publications; recently contributed extensively to the history of world animation by G. Bendazzi; to Global Animation Theory (Zagreb) and Propaganda, Ideology, Animation: Twisted Dreams of History (Krakow). Lectured in several universities and institutions internationally. Participated in a number of festivals as programmer, curator, juror and discussant; currently affiliated with Blow-up International Arthouse Film Festival (Chicago). Also involved in broader cultural journalism and documentary film-making; interpreter and translator.