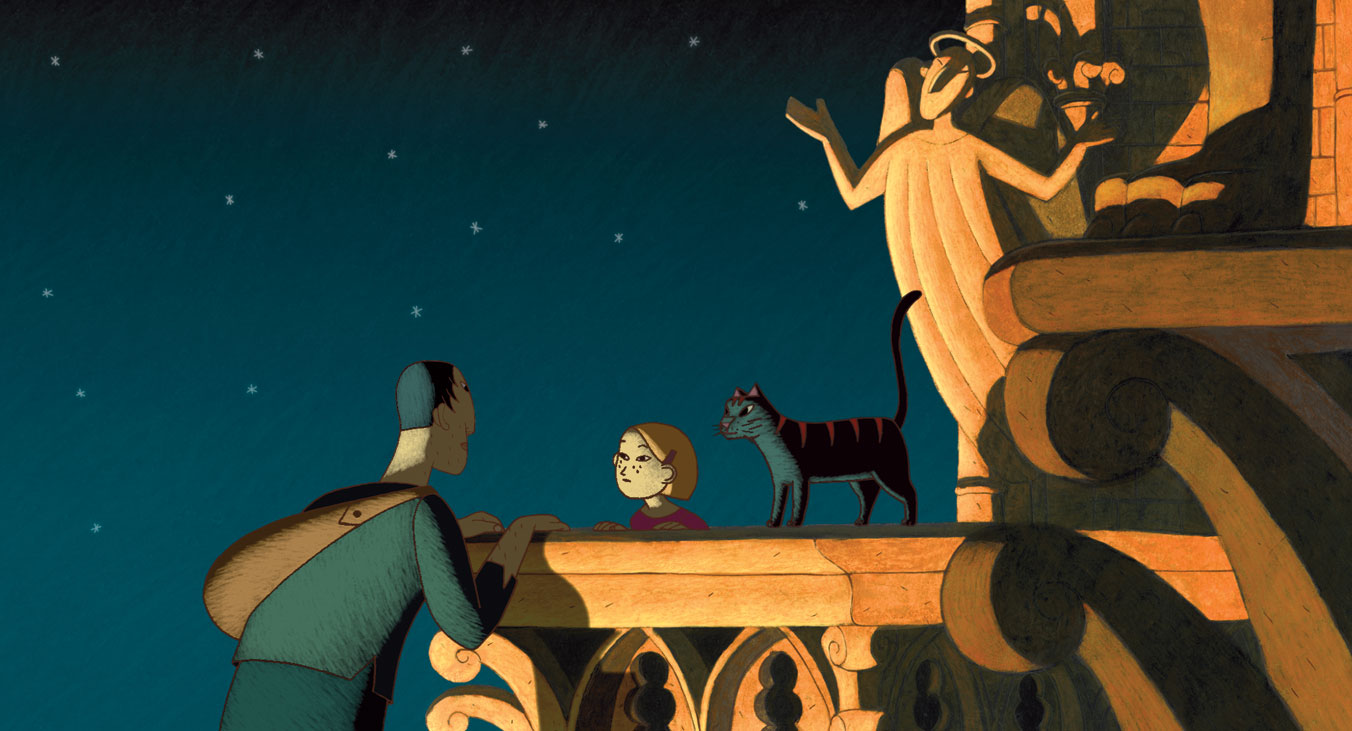 A Cat in Paris (Une vie de chat) by Jean-Loup Felicioli and Alain Gagnol tells the story of Dino the black cat -all stripes and no sweet pussycat- who becomes an effective protegée for his owner, Zoi, a little girl in Paris.

Zoe's father has been murdered by the frightful Costa, a fat, arrogant and Joe Pesci-style kind of person, who keeps entering the nightmares of Jeanne, jZoe's mother. A police inspector herself, Jeanne keeps neglecting her daughter to deal with her own work. However, things get complicated when Nico, a petty thief, teams up with Dino to rescue Zoe from an adventure none of those involved could have ever  imagined.

A Cat in Paris starts as a jazzy, Woody Allen-like ode to Paris at night (helped by  Billie Holliday's rendition of "I wished on the moon"). It soon enters, though, the police-gangster genre territory. With no sentimental shortcomings, it unfolds the mother-daughter reconciliation theme through an enchanting rooftop Paris journey that employs no more acrobatics and magic (pace Mary Poppins) than necessary.

Dino the cat has graciously neither anthropomorphic powers nor a superhero role. The burden of action is carried by all characters involved, and humor is also served (predictably) when Costa's hapless gangster team exchange accusations, and (unpredictably) with the always alert WiFi dog.

A suspenseful film, A cat in Paris culminates in the final Notre Dame act the way Hitchcock used his characters in the Mount Rushmore in North by Northwest. The music by Serge Besset serves admirably the purpose.This lonely and unadorned 2D Paris universe by Alain Gagnol and Jean-Loup Felicioli is simplistically but solidly colored, and the night vision sequence with both Nico and Dino looking to rescue Zoe mesmerizes.

Even if the ending fits the genre requirements and gangster characters seem too stock fools to be true, the persistently crisp pace and mood of A cat in Paris makes it come out as a winner in the animation gangster department.