A Letter to Momo review: Learn to forgive and forget 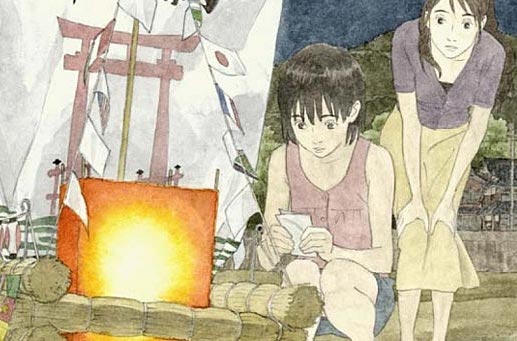 What is grief and how can a child bear it? A Letter to Momo tells the story of a 13-year-old girl (Momo), whose father has recently died.  When Momo's family moves  from Tokyo to a remote island named Shio,  Momo does not adapt well to her new surroundings. And what surroundings! The first 20 minutes of the film seem to pass so uneventfully as Momo's current (but silent) psychological state of despair.

A meeting with her mother's relatives, an unsuccessful attempt to connect with the other boys and girls of her age would almost make Momo a seclusive person - if not for the two-word letter that her father left her, her guilt for fighting the night before with him, and some strange creatures.

It is not the first time that Japanese anime evolves the supernatural, and older relatives are about to inform Momo of ghosts that cannot return to their home. Yet, the ravenous appetite of Iwa, Kawa and the tongue-in-cheek, ET-informed Mame almost substitute the joys of friendship that Momo would never dare to achieve.

Being unrevealed to the others, those goblins and their companionship make the second part of the film  lean dangerously into the territory of raucous comedy. Adventures and fart actions abound, and the perfectly shaped amphibian faces is a safe antidote to the hygienically sterile world Momo has experienced so far.

Yet the plot wanders at the same time. It is only in the third part of the film, when Momo's mother is found in great distress that the whole gang (and a lot of supernatural things in between) will attempt to reunite all the plot elements, and make Momo responsible for herself and the ones who love. Momo will learn to forgive herself, in order to love the others.

A Letter to Momo is realistically narrated, and apart from the bridge sequence, does not mimic the Miyazaki supernatural world. The goblins are part of the mundane environment, and this contrast makes them interesting.  There is a lot of sentiment, but the power of the film lies in the single characterization of Momo: a child under guilt, fear  and the load of responsibility, who needs help to dive into the deep waters of social contact.

Yet, when she manages to do that, it is all joy and sincerity at the same time. A Letter to Momo does not involve a lot of innovation, plot surprises or visual enthusiasm (earth and calm colors abound in the film), yet it installs genuine empathy.