Children Who Chase Lost Voices review: next stop, land of the dead 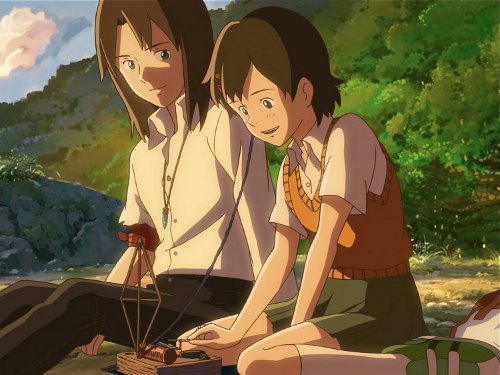 Children Who Chase Lost Voices from Deep Below would be unfair to its English title (Children Who Chase Stars seems to be the literal translation), if it were shorter and less rich in narration than expected. It is long, it is rich in adventure, and it comes out as a modern Odyssey of a girl into the realm of the unknown. But it lacks real drama.

The film revolves around Asuna, a young Japanese girl who is the best student in class, but otherwise a lonely character. After the death of her father, Asuna only communicates through her radio listening to mysterious messages, and shares their excitement with her squirrel-tailed cat, Mimi (the only exciting face in the film).

Request for company is the excuse for Asuna to enter a dazzling adventure into the world of Agartha, or the land of the dead. Her early, earthly encounters include an ugly beast (or gatekeeper to the Agartha world), who would devour Asuna, if only a shining friend, Shin from Agartha did not intervene.

Shin does not have much to do in the narration, and dies after a while. But death in Children Who Chase Lost Voices from Deep Below is the real incentive for action, not loneliness. Both Asuna and her new, knowledgeable, spectacled teacher Mr. Morisaki decide to go to Agartha because of the death of their loved ones. Mr. Morisaki in particular plays the role of Orpheus who seeks his long-dead wife, Lisa.

The script uncompromisingly builds a new name for each thing, in the same way that The Lord of the Rings trilogy required to pre-consult your relevant encyclopedia. Arch Angels, top-dwellers, Quetzalcoatls and the really scary Izoku skeleton monsters are only same of the names that build the legend and the inhabitants of this world.

The duo of Asuna and Mr. Morisaki has the necessary (but reluctant) help of Shin's brother, Shun. This group parades through caves, lakes and villages to show that zealots (people who cannot understand neither life nor death) need to be faced, and that true inquiry and knowledge should prevail.

This preoccupation with knowledge and curiosity is evident in the film. Books feature in Asuna's school library, a Master in the Amaurot village where the insiders settle can make them feel at home for a while. Yet, it is curious that this quest for knowledge does not translate into personal and sentimental development and conflicts.

Mr. Morisaki is the most ambivalent character in the film, and dramatic tension between the trio only arises at the final moment of being in the Gates of Life and Death. Their adventures can devour the attention, but leave the palate thirsty for affection and real sensitivity.

It seems as if the characters have no time to stop and feel things; they keep anxiously moving from one adventure to the next.  Only at the moment when the very small Mana (a young girl whom the trio saved and brought back to her village) meets the giant Quetzalcoatl that the film suddenly feels poetic and otherworldly enough.

Children Who Chase Lost Voices  makes a great effort through its 116' running time to depict the human need for adventure and communication. It does not go visually too far in the realm of the supernatural: with all its monsters, Agartha is not that different from its earthly, more mundane counterpart, and blends seamlessly both worlds.

Still, it never asks why people come close to or oppose one another.  If all we need is other people, why look for them in the land of the dead? Asuna's first chaste kiss experience evades the question, and so does the film.