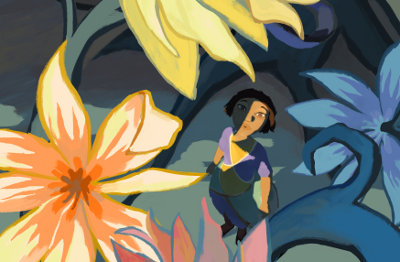 Imagine a Platonic state gone wild. Its three classes, Toupins the completed characters of a chateau painting rules the other two classes, the Parfinis (the incompletely drawn characters), and the  Reufs/Sketches who like like skeletons.

Parfinis and Reufs are only good for secondary jobs, and Reufs have been reduced to semi-slave status. Yet love between Ramo, a Toupin, and Claire, a Modigliani-faced Parfinis seems to make things forward.

This is only the beginning of the latest feature film of the 76-year-old Jean-François Laguionie, based on the multi-layered script by Anik LeRay (Kerity). What holds multiple narrative strings together is the search for the painter, who is about to finish all class inequalities propounded by the majestic and powerful yellow Candlestick. The unfinished Lola, Ramo and her Sketch friend (along with a tambourine boy from a war painting) search their quest for the painter.

It is not usual for a film so visually rich and beautiful, almost a fauvist picture in motion, to undermine all its pretty qualities by its subversive message. The most prettily drawn characters, the Toupins, are also the most hateful. A carnival in Venice (a central locus of action) is also a place for grave danger -even though the death character chasing the heroes unfairly reminds of Roeg's Don't Look Now (1971). The incredibly pretty natural environment surrounds, engrosses and almost suffocates the characters.

Yet the human spirit leaves on. A dangerous forest adventure becomes no more than a human prejudice, and the Venice incident (coupled with an engrossing, but not overposing orchestral soundtrack by Pascal le Pennec) safely leads to the final battle and confrontation with the Toupins -and the film's happy ending.

However, Le tableau is not only a kids' film, and does not only celebrate love above class struggle. What makes the film exquisite is the relation between the artist and his/her artifacts. There are many films that contemplate what will happen if the art objects become alive; however, the need to find the artist recalls the need of a God-creator, and the quest for both human independence and happiness.

Can happiness be achieved even in unfinished status? Most of the characters attempt to paint themselves at the end of the film, sometimes with mixed results. Lola dares to meet her creator (played by the director himself), and ask his view about that, which will not be what all the characters hoped for.

Le tableau is a visual feast, yet it uses its exquisite aesthetic to contemplate about its own nature and the need to ask  -not acquiesce in beauty itself.