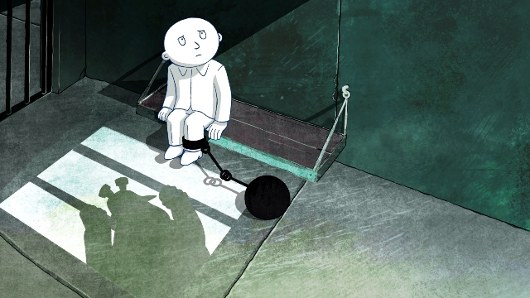 Stephan Schech (also filmed Ungerer's novel, "The Three Robbers") directs the 2D animated story and adventures of a sympathetic man on the moon accidentally brought to earth. Tomi Ungerer himself appears here as the film's narrator.

Apart from a daring (and insinuating) sexual innuendo, Moon Man belongs squarely to children's comfort zone. The narrative is simple enough: a most sympathetic (but otherwise clueless and characterless) Moon Man has to face distrust and pursuit from the dictatorial head of the earth.

The latter guy seeks assistance from a naive German scientist to prepare a rocket for him to conquer the moon; however, his plan will find resistance.

Ethical distinctions are portrayed visually with the utmost clarity. The round and luminous white figure of the Moon Man cannot fail to arouse warmth, while the broad-shouldered master is certain to elicit aversion.

Co-produced by the Oscar-nominated Irish animation studio Cartoon Saloon (along with Schesch Films and Le Pacte Film), colours and surfaces here are more important than depth of field. The initial wanderings of the Moon Man in lakes and rivers (accompanied by Louis Armstrong's rendition of Moon River), among frogs, butterflies and crabs give a sense of natural bliss.

For a film whose action takes place almost exclusively during the night, it is a great achievement to watch with interest a parade of colored objects (the rocket the scientist builds is a visual candy in itself).

And a sense of romance hovers over the film, most explicitly smelled in the sequence of children in their beds looking for their favorite Moon Man. (It even reminds of Norman Jewison's Moonstruck). The subtle, jazzy musical score heightens the experience.

But no emotional rapport is evident. It might have been a safe choice not let the film advance too far into E.T.-like sentimentality (considering the plot similarities between E.T. and Moon Man). Yet the lonely Moon Man who looks for a friend seems more like a combined version of the Scarecrow and the Lion in The Wizard of Oz ("What is a heart?", "What is trust?") than a person in need of human contact.

He is a stranger, and his deep voice (superbly voiced by Katharina Talbach) betrays wonder, not love.

It simply has to be accepted that all children (including the trio of persons that begins and ends the film) find the Moon Man human and friendly enough to be their guide.

Otherwise, lack of drama in Moon Man cannot compensate for fine imagery. Children may be entertained, but there are things that could be developed (one of them being the dictatorial rule exercised) to keep the parents alert as well.