My Mommy is in America, and She Met Buffalo Bill Review: Past Absence, Present Fantasies 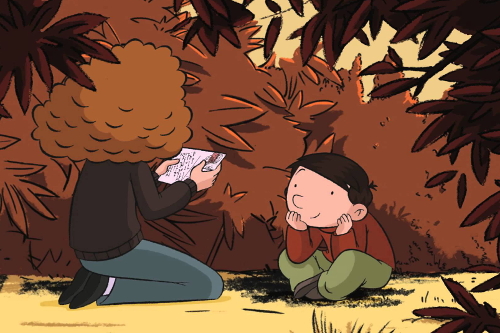 Based on the 2007 autobiographical graphic novel by Jean Regnaud (co-written with Emile Bravo), My mommy is in America and she met Buffalo  Bill is a French/Luxembourgian release by production companies Label Anim, Melusine Productions and Studio 352).

It is the first animation feature for Marc Boréal, while Thibaut Chatel (founder of Label Anim), co-directs the story of Jean (Tom Trouffier), a first grade student in 70s France, who needs to find his own way through the rather harsh school environment, at the same time building illusory worlds with his dead mother as a participant.

Jean is not alone, yet his father who owns a can factory (Marc Lavoine) has no time for him and his more extrovert brother Paul. Jean's over-concerned Grandma and stingy Grandpa are not ready to provide for the love that Jean misses. So, it is the young nanny Yvette (Julie Depardieu) who will both bring some magic in the kitchen, and excite Jean's imagination with bedtime stories about princesses and servants.

This is the 70s, the age of French actor Jean Richard and singer Claude François (the composer of My Way). The modern car exhibition takes the best of Jean's father, who walks with a Citroen DS, while his father-in-law can only get a SIMCA 1000. But Jean only dreams of riding Indian horses instead, and fighting the bad guys. It could not get worse than that.

Jean Regnaud (who also wrote the film script, along with Stéphane Bernasconi) eliminated the first-person narration of Jean of the graphic novel, and that only makes Jean and his memories more enigmatic.

Jean is an intelligent 6-year-old (he can perfectly read and count when asked), but is still too insecure, and noone really knows when his fantasies will get the best of him.

The carefully researched colors (art director: Pascal Valdès), which depict the school as a potentially blue cold and violent place do not make things easier for him. The soon-to-be-retired Miss Moinot a quirky figure, only talks of discipline but never of joy.

The design palette turns more earthly and nostalgic as Jean reaches home and secures his favorite spot, among the trees with the neighbours' daughter, Michèle. She is the one to enact Jean's fantasies with postcards from his mother (Jean cannot yet read), and her imaginary adventures in exotic places take away of the rather sad and dreary life Jean has to face.

Two plot elements move in parallel: on the one hand, the increasingly exotic stories that Michèle tells Jean, and on the oh the other a war occurs (not a game) of marbles, Jean's only way to enter the school society and proclaim his own identity.

The dumb blond but cunning and tall Vénert is the first to blackmail Jean, while other classmates quickly align with Jean, when they learn that his "iron marbles" are worth more than the clay ones Vénert has accumulated. It seems like another business proposition, but it will sure get Jean into great troubles -at least, in his imagination.

Some great reenactment heroic scenes occur both in Wild West settings and African forests, the best of which occurs in wide-screen format (with a witty Ennio Morricone tribute by film composer, Fabrice Albouker), in the grand marble competition.

Yet even those enchanting retro scenes are grounded in realism, they do not lead to wild compositions and visual effects.

Regardless of the sepia atmosphere, Jean and his immediate environment feel imprisoned into a present they cannot face. The theme of a prison surfaces prominently and repeatedly in the marbles game, but surrounds the family (Jean's father is "a prisoner of his job") and his immediate envionrment.

My mommy is in America works a lot like Alfred Hitchcock's Suspicion. Its starting point is a rather ordinary case of school bullying and father neglect, but it fuels the audience with expectations of the dramatic effect that acknowledgement of the mother's death will have.

Yet, the suspense built does not explode, but rather evaporates. The dramatic confrontation and revelation is powerful, but the happy resolution seems hasty. Jean has become "big so fast" as his father says, and the film seems to be in a hurry to close any remnants of loss that Jean may experience, just like the games children play.

My mommy is in America and she met Buffalo Bill is not as adventurous or dramatic as The Day of the Crows, and the story sometimes seems to hesitate, as if a new plot development would break the immaculately static, 2D character of the design.

Yet, it is a welcome cinematic fight of a child to acknowledge his own memories; it needs to be watched by all those who consider childhood and animation features as something more than a kid's fancy.