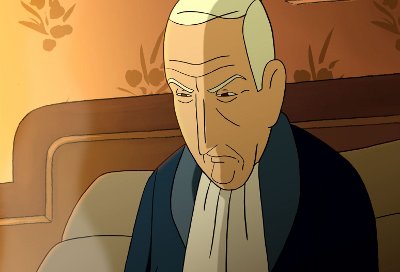 Wrinkles has started its career as a graphic novel by Paco Roca in Spain (where it also won the 2008 National Comic Book Prize). In its cinematic manifestation by Ignacio Ferreras (also involved in Sylvain Chomet's The Illusionist), presents the world of the retired bank manager Emilio, in the early stages of Alzheimer, who has to move to a residential house for the elderly.

The too-official dressed Emilio (a tie has a special role to play in the course of the film) will soon find out that the seeming luxury of the residence hides an almost unbearable routine repetition in a vast area of empty spaces. Monochromatically colored interiors (each with its own soft color) match the 'eating, sleeping, shitting' motto of the everyday routine.

This is an autumnal, delicate and definitely not a gloomy world. Stock funny characters appear and lighten up Emilio's confidence, such as the parroting behavior of an old radio dj or the sexual appetite of a blind old man. Yet he will find his match in his slightly immoral and cynical Miguel, in the way that Jack Lemmon found Walter Matthau in the Odd Couple. Miguel is ready to teach his "Rockefeller" (the nickname he invented) the basics about life survival, and that cheating to his unable to understand inmates may not be a breach of morality after all.

What comes as the most powerful contrast is the inner life of the residents: unable to lead a normal life full of variations in the calm but dry residence environment, they invent a whole world (also depicted on screen) of trains and voyages, Aliens -and even memories of first love (the Modesto and Dolores sentimental cloud scene) resurface as fantasies here. An object of both laughter and admiration, these sketches make evident that failure to remember does not imply a failure to imagine.

Personal relationships amount above all. Miguel will learn to care for Emilio, when the latter becomes unable to sustain himself. The deteriorating process is given in Wrinkles in a remarkably dignified way: Emilio realizes his illness and gets ready to be alive (his swimming pool scene is both an exercise in optimism and a reminder of what will later follow).

Shown from the first person perspective (until that person no longer exists), the Alzheimer process becomes something personal and universal, which only human kindness (and the gentile musical soundtrack of Nani Garcia) can at least mitigate.

Wrinkles  sometimes makes an unnecessary foray into One flew over the cuckoo's nest territory. The late-night adventure of Emilio, Miguel and Antonia, and the inexplicable general negligence of doctors and nurses toward their patients does not seem plausible enough. Yet, Wrinkles balances perfectly sentimentality and gruesome reality. It's all about wrinkles, not face destruction.