In this 43rd edition of Cinanima, among several competitive, thematic and commemorative sessions, one especially caught my attention, it was: 20 YEAR AGENCY: Carte Blanche to Portuguese Directors.

After Germany, Croatia, and France, Espinho continues the celebrations of the 20th anniversary of Agencia – Portuguese Short Film Agency. It was an “animated” acknowledgment for the Portuguese audiovisual development agency, which has been supporting and making possible the production of many good animation short films in Portugal.

In this Cinanima festival session at Cinanima, the public could see and bask with seven Portuguese animation masterpieces (between 2004-2017). The curating was done by David Doutel and Vasco Sá, two prominent Portuguese animators. As they describe themselves this session:

We are so pleased to be associated with the celebration of the 20 years of the Agencia da Curta-Metragem. Especially considering that a sample of the recent history of Portuguese animation short films is in focus.

CINANIMA is a very special Festival to us, and to animation in general, so doing this presentation here is particularly meaningful. All the films we’ve chosen have common feature memories and places, but not from a historic or nostalgic perspective. What drew us to these films was understanding how different authors take their perceptions and experiences, their “places”, and transport them into their films. We’re able to discover various Portuguese landscapes through the distinct graphic styles of each author - all backdrops are somehow familiar - the films happen right next to us and even inside us (Cinanima Catalogue 2019).

As Vasco Sá has very clearly stated at the opening of the session, “perhaps it is always unfair to select some films within the 20 years of the agency”. Yes, it is a difficult and always unfair result before the great universe of animated productions and quality that Portugal has gifted all of us; this  would certainly not  be possible without the help and support of this state agency. In this regard, it is always necessary to value and recognize these actions and initiatives - not only for Portugal, as a way of saying “thank you”, but also speak to all governments: “Look the results of this actions: this is fundamental, it is a good deed and worth it".

The session left me with an inner deep feeling and reflection on the Lusitanian spirit (Fado of a Grown Man),  a feeling of visual poetry (Tragic Story With Happy Ending) already present in Portuguese literature. The spirit of people linked to their land (Wind's Embrace), who give importance to their identity, valuing their historical and cultural roots (Drop by Drop). People who, in a certain way, cherish the sadness of the homesickness of those who left (The Eyes of The Lighthouse), the time that has passed by (Any Other Man), reliving their art (Stuart), and waiting for what is coming. There is a specific word in Portuguese to name the feeling of lack for someone or something "saudade".

As one session among many, it followed its curators' line, leaving other highlights for the other sessions at other events. However, it would be really nice to see also the comic and the critical Portuguese look, in films such as Countryside By the Sea (André Ruivo, 2015) or The Tortoise (Pedro Lino and Luis da Matta Almeida, 2012).

The films (already mentioned), to remember, re-watch and to know (if it is the case, :)!

THE EYES OF THE LIGHTHOUSE
0:15:00 | 2010
On a rocky island exposed to the elements, a lighthouse keeper lives alone with his daughter. From the top of his tower, the father keeps vigil to the horizon line and for the safety of the passing sails. With no other company, the girl develops unique complicity with the sea, which brings her toys in the shape of debris on the shore.
Following the rhythm of the waves, these objects will unveil previous events, memories that the tide cannot erase…
Direction: Pedro Serrazina
Production: Sardinha em Lata, Lda 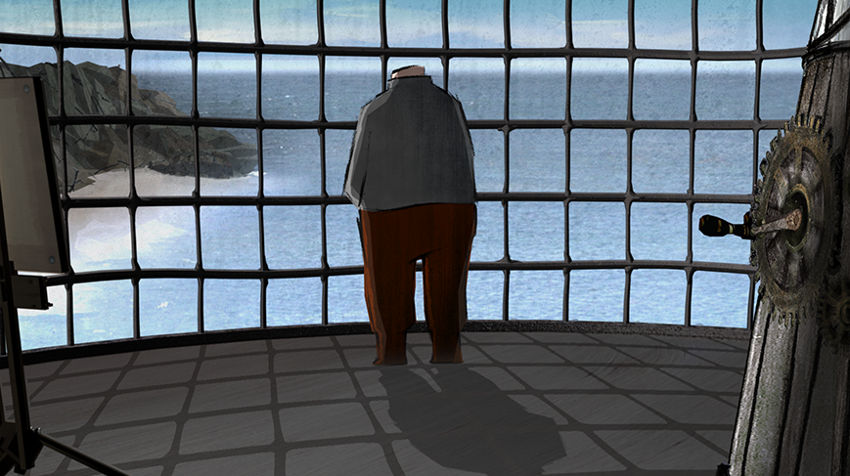 The Eyes of the Lighthouse

TRAGIC STORY WITH HAPPY ENDING
0:07:46 | 2005 | B&W
Some people are different, against their will. All what they wish is to be equal to the others, deliciously mixing among the crowd. There are people spending the rest of their lives fighting to achieve this, denying or hiding their differences. Some others assume it and raise up themselves, getting their place close to the others… in their hearts…
Direction: Regina Pessoa
Production: Patrick Eveno, Marcel Jean – National Film Board of Canada; Jacques-Rémy Girerd, Folimage; Abi Feijó, Ciclope Filmes

FADO OF A GROWN MAN
0:07:00 | 2012 | Colour
A man is sitting at a pub and after having lunch with an old friend he recalls short stories of his childhood in a social neighborhood in Lisbon.
Direction: Pedro Brito
Production: Humberto Santana – Animanostra-Cinema, Audiovisual e Multimédia

DROP BY DROP
0:09:15 | 2017 | Colour
The last habitants of a village refuse to let themselves sink into oblivion. In a world where the idea of progress appears to be above all, this home floats.
Direction: Alexandra Ramires (Xá), Laura Gonçalves
Production: Rodrigo Areias – Bando à Parte