Hypnotic and utterly compelling filmmaking from director Tomasz Popakul whose previous film was the highly distinctive and celebrated Acid Rain.From the first gripping, involving moment, the film uses intensely sensual and tactile material aspects to place the viewer in this nocturnal urban landscape. Combining 2D rotoscoped characters and what appears to be live action, we experience an individual’s walk through the city, along underpasses and past police vans. 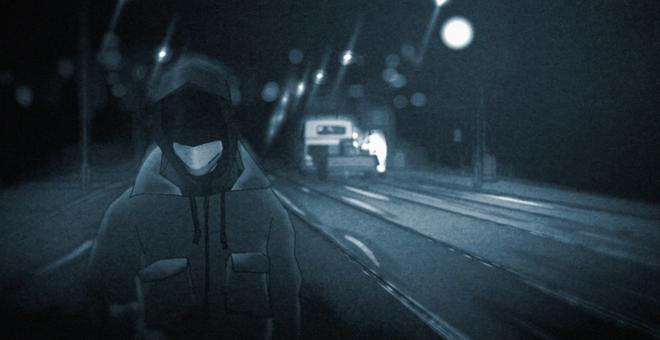 There is a harsh slickness to the graphic elements, balanced against handheld footage of puddle son tarmac reflecting the moon. Most striking is the sense of immersing in landscape through close attention to surface detail – reflections in puddles, tarmac, plastic flapping in a breeze. It’s a deeply atmospheric film, focused on communicating subjective experience in walking through a city to gaze at the moon: a moment to reflect on the past 18 months of international lockdowns against the concerns of Extinction Rebellion: truly groundbreaking filmmaking!

Another very interesting and ambitious approach to combining live landscape footage with 2d characters.An isolated young woman, who seems to have recently come out of a relationship, goes to a pulsating and menacing dance club, from which she tries desperately to escape. She meets and is befriended by a young woman who leads her out of the club. The film makes bold use of loose overlays of drenched colour and wet film effects.There is a very interesting sensuality to the combination of 2D characters, photo landscapes and fluid scribble, and the story powerfully evokes the intensity of human connection and the disturbing sense of feeling out of place.

In my Chest of Fire there is still place to temple your dagger, Pablo Ballarin

This 24 minute film is an interesting representation of adult themes, and ambitiously depicts quite explicit sex and violence. The overarching aesthetic, of continuous line boil and deliberately 'bad'/kitsch walk cycles begins to feel mannered, as though the use of 'bad' drawing is necessary in order to neutralize the tendency of classic animation to make things look 'good'.

Affairs of the Art, Joanna Quinn

Beautifully drawn with a sensitive atmospheric approach to lighting. Multiple animal casualties, pickling and life drawing propel a humorous story, set in South Wales. We reconnect with Beryl who draws constantly, and through her eyes and drawings we experience her life and family, all with their own obsessions. The film has a nostalgia for growing up in South Wales, and how society used to be, an dis both moving and very funny. Humour is wild and foul mouthed, and the quality of drawing and motion makes fro a highly irreverent experience.

Winner of the Grand Prize for the Grand Competition Short Film, this surprising and beautifully crafted 20 minute film is an unusual combination. The story ranges through domestic abuse, theft, cruelty towards animals and wild, uncensored violence. There is some similarity to the films of Wes Anderson, both in the use of composition and the multilayered story with fantastical elements. The nighttime atmosphere is captured so effectively, with the moonlight seen through palms blowing in the wind: this is a wild and alternative artwork, that takes the viewer off guard in transgressing genres.

A beautiful and highly sensual story about a mermaid. Living a solitary life, the mermaid picks a handful of magic leaves that she takes back to her underwater home. There she uses saliva to stick them to her forehead, and they create a portal to the human world, visualized delightfully through a sped-up journey along a drain. The artwork creates tactile connections, such as the floor tiles echoing the magic leaf forms as they leave a mark on the mermaid’s forehead. It’s exciting to see such sensual visualization, and the mermaid is defiantly full-bodied, self-pleasuring as she observes the human world. Consumed with desire she finds a human lover, and their meeting is both humorous and refreshing in its approach to human form and the need for intimate connection.

Under the Skin, the Bark, Franck Dion

An interestingly stylised short film, in which an animated character escapes from it's imaginary world and wanders into the room where its creator is trying to re-design it. Featuring enjoyable drawn textural qualities, with bark for skin and strange masks, the story delves into the act of creation, examining what connection and accountability there is between a creator (writer) and their imaginary characters and worlds.

Friend of a Friend, Zachary Zezima

An interesting story, following a group of young people at a party. One young man flirts with another and is attacked as a consequence. Domestic violence and homophobia is depicted quite bravely, and the strong expressionist sense of colour and simplified form gives a vivid quality to the story and the cosmic imagery unifies the film. The complex storyline needs stronger facial animation and expression, which leads the narrative to start to meander.

Powerwash (I love you), Rory Waudby-Tolley

London animator Rory Waudby-Tolley’s very short film inventively uses everyday domestic chat, interpreted through automated voices. A man and woman discuss the view from a window whilst she washes up, and the conversation takes us back to when they first met, and how they enjoyed dancing together. Through imaginative transitions there is a strong sense of a virtual (memory) world, as they recount their meeting in contrast with their current life.

Powerful film about animal empathy and abuse. A young girl witnesses her father trap and butcher a wild deer. That night, she refuses to eat the deer, and is cruelly punished. Her household is violent and abuse fills the air; when she dreams, she sees the deer and in a wonderful moment of connection, the deer stands up on its hind legs and she steps out of its skin. The film deploys a strong sense of individuals as part of a landscape; whether colonies of ants or herds of deer. Painted with a sensual wetness, the whole film evokes a deep sense of a child's connection with Nature and struggle to conceive of the harshness of adult behaviour.

A man comes home and wants to go to bed. A bunch of noisy roommates. A crowded city in southern China. A young man returns home exhausted from work. Collapsing into bed, he is soon disturbed by his noisy flatmates, who snore loudly, flush toilets, start fires and play football all night long. The film uses a dreamy sense of space, and outstanding production design to tell a story of relentless sleep deprivation.