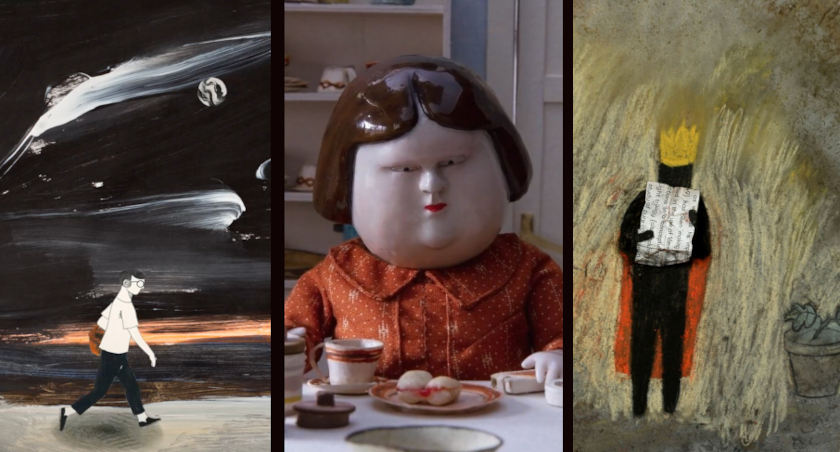 Zippy Frames and its contributors pick up and present their top picks from the short animation films at Annecy Festival 2021.

Here they are (in alphabetical order):

The art of the living itself, and the art of creating are contrasted with the art of the dead in Beryl's recent re-incarnation in Affairs of the Art. The signature fluidity of movement here compliments the fluidity in the narrative itself, with frail, non-caricatured characters looking for fulfilment, and tired of failed aspirations. Individuality is on the forefront of this exquisitely funny film, which moves like bumper cars in the amusement park -yet no one gets hurt. Beryl, Beverly, Colin move, talk, occupy the space, and in essence reveal to us our own (also frail) attempts to become somebody. A deeply caring film -VK

1975 Chilean Intelligence official Ingrid looks like a Botero porcelain doll and acts like a Nazi torturer; Her dog is both her companion, her tool work and her object of fears in this precisely calculated study of a slice of a country's dark past. Edited in such a way to distort reality (but up to a point), Bestia is a cold-bloodied account of human suffering the way the solitary torturer confronts it. The fact that we can identify with her own ordinary worries shows the banality of the evil itself, in a world where good people are almost absent, helpless or need to have a gun. An almost terrifying short -VK

The programmer's dream, or one of the most refined “cutscene” you may experience in a high quality level art-house animated festival's programme. At the same time playful and powerful, this miniature employs an equilibristic approach to montage, sound editing, and choreographing the illusionary movement. Liberated, vigorous, and autonomous bodies of the athletes float rapidly before the eyes of the viewers, challenge limits of perception, and chart its novel possibilities. A perfect ad for Olympic games that have never happened - OB

Making-of/struggling-with/reflecting-upon – all in one. Reflecting – more importantly: on the trade and the art(form), oneself within those, and on human-social condition that entails, and all that goes along in the package deal; leave alone festivals/selections as prerequisite to existence, of creators and creations alike, a path to triumph or pain …-- bravely attempting to put the conflicting facets in some order and to harmonize mixed media of choice(s). A risky, but insightful move, moreover justified by the splashes of live-painted sheer beauty in the final – or maybe still ‘dreamed-of’ – film -MG

Nostalgia of the pure and honest grade and nature – likely for times and places at once; with sharply telling (historical/geopolitical) small details. And also, perhaps – nostalgia for the dissipating canon(s) of the profession. Seemingly good old drawing (even if in 2D softs), a bit flickering (akin to any recollection), simple and laconic, as is also the narrative mode – the dot- and-dash ‘atmospheric storytelling’ is again alive and kicking, i.e. touching. Generations and locales are mixing and dissolving, but the basics of life are here for good. As is the eternal hockey – and the Canada-USSR epic face-off!.. -MG

A slowly evolving animated meditation over design simplicity and reduced imagery contrasted with intensity and perceptual ambiguity emerging from the nuances of a one hue. A headless character traverses through a landscape of an urban park. He/she (later on joined by other shapeless creatures), accompanied with the sounds of birds singing tentatively, enjoys every second of it: they roll in the soft, cut short, and verdure grass; dive in the depths of a calm canal; await the dusk, and the first light sparkles of the lanterns. Nature, whatever it is, makes its call -OB

Per dictionary definitions, it must be about the mechanics of memory; per director’s declarations – about remembering and forgetting, childhood and family. And indeed, it is – a take on all these, and maybe more. A serious and loaded beginner’s step. Technique-savvy, and in that tasteful; aware of the metaphoric potential of formal moves. Charcoalish drawings feel almost virtual; freeze-traces of the elusive movement preserved in the shots; and the split screen as if mind mirrors-hemispheres. Intergrown trees-faces-voices are firmly imprinted in your life (hi)story, and thus – personality; and oh! - this wind-up ballerina’s refrain table dance gives you gooseflesh of a sudden-shared reminiscence -MG

A young murderer's story told from the first-person point of view becomes a study of a dysfunctional, maternal presence. Barring horror (even the murder itself is 'pathetic') Horacio shares a quiet calm before the worst to happen as a matter of chance. Nature and the relaxed country atmosphere becomes an accomplice to a character who cannot get hold of his real fears; contrasting, vivid colors warn us that rehabilitation won't be easy -and talk here is used to its extreme to make spectators silent accomplices. Horacio (the name of the murdered) is a story of numbness before the big questions -and a well-told one -VK

There is an utmost simplicity in this tale of school longing between a girl and her fellow student, and the small moments (such as lending a swimsuit) that get entangled with our wishes. Paper drawings here are implemented in shots which show fragmented, but still connected aspects of the body to be navigated. Here told with visual restraint that applies to the early stages of a relationship, The Mark of Emi tells the need of tangible evidence of our intimate wishes, and it has a grace and the flow (both narrative and visual) of a story that unfolds and steadily proceeds to its bookend mark -VK

A very much enjoyable interlude to horror with a possible social subtext. The narrative premise is simple and comic: a little girl keeps trying to grasp her mother's attention during (an almost) classy cocktail party. To accomplish this, the girl forms a relationship with the somewhat disgusting and slippery fish. Intense, kitschy, and colorful decorum build a labyrinth-like environment examined from a perspective of an invisible and inquisitive observer who easily sees through the facade, and does not fear to look for the precious things in the garbage. A film that cannot be unseen -OB

In an architecturally impossible house (or a box) three characters are stuck together (or alienated from each other) following particular routines instead of (or because of) the fact that the closest surroundings undergo a constant change. A compelling visuality based on mixed hand techniques, saturated color palette, vibrating textures, and unpretentious drifts between figurative representations associated with Western and Eastern traditions of graphic arts, validates this dream-like reality as a world “real enough” to immerse in, and disqualifies any signals coming from external contexts -OB

A new and probably different [fresh] stage for this prolific-to-never-stopping director. With his trademark weirdish imagery and wild-paced editing still in place – feels more focused and transparently personal; even lyrical – opening up into a sort of ‘constructivist lyricism’. A balancing act at the edge of the figurative-narrative or almost abstract-meditative; edgy poetic in all. Bodies and minds de- and reconstructed on the way; hopelessly caged and/or being liberated, if only tentatively. Quarantine-era ultimate metaphor? Maybe beyond that -MG