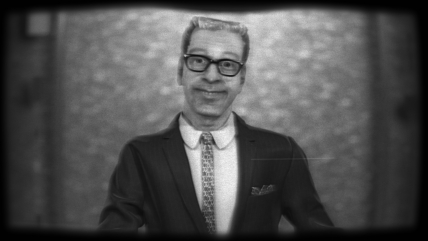 The new film titled Subconscious Password, a production of National Film Board of Canada (NFB), will be part of the lineup at Annecy International Film Festival (10-15th June) this year.

The film description reads: "In the middle of a crowded bar, Charles finds himself feeling increasingly desperate. The cause of his misery is an old friend he’s just run into; his old friend... you know... what’s-his-name...".

Chris Landreth is best known for his film Ryan, which received the Academy Award for Best Animated Short Film in 2005, over 60 other awards, prizes at the Cannes Film Festival as well as the Grand Prize at Ottawa International Animation Festival in 2004. Watch the Oscar-winning Ryan by Chris Landreth and read the Subconscious Password description below:

In the middle of a crowded bar, Charles finds himself feeling increasingly desperate. The cause of his misery is an old friend he’s just run into; his old friend... you know... what’s-his-name... In Subconscious Password, Oscar®-winning director Chris Landreth uses a common social gaffe—forgetting somebody’s name—as the starting point for a mind-bending romp through the unconscious. Inspired by the classic TV game show Password, the film features a wealth of animated celebrity guests, plus Charles’s mother and his childhood babysitter, who try (and try, and try) to prompt him to remember his friend’s name.

Charles, Landreth’s alter ego, somehow fails to grasp even the most obvious clues. As his frustration increases, the film’s 3D effects become more pronounced, mirroring his growing psychological imbalance. Finally, he realizes he will simply have to surrender himself to his predicament.
Subconscious Password is a playful and irreverent take on a familiar experience. It may not help you jog your own memory, but it’ll make you more inclined to forgive yourself for struggling with the dreaded question: “What’s his name? What’s his name?”