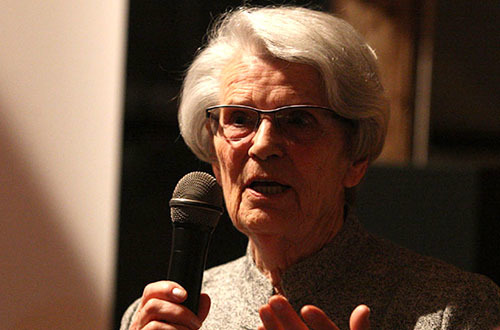 Screenwriter, director, animator and pedagogue Libuše Čihařová began her career as an assistant animator in the Bratři v Triku Studios. She was hired in 1951 and under the influence of Czech animation greats such as Zdeněk Miler, Jaroslav Bedřich and Jiří Brdečka, she later adopted other professions.

She became a renowned animator who was always able to cope with various artistic styles. She collaborated on more than ten Bedtime Stories series such as: O makové panence (Miss Poppy), Kosí bratři (The Blackbird Brotthers), Bob a Bobek (Bob and Bobby), Štaflík a Špagetka (Štaflík and Špagetka), Nils a divoké husy (Nils and the Wild Geese) and Maxipes Fík.

I was very surprised when Mr. Pavel Horacek, Program Director of Anifilm, told me that I will be awarded at this year's festival in Trebon. Cartoon animation has become the focus of my interest since the last century and has remained so until today, actively until 2017. At first I worked as an animator and director in the Bratri v triku studio and since 2000 as a pedagogue at the animation department at FAMU. I appreciate the award and I thank to Anifilm for watching and supporting the development of this beautiful film profession  - Libuše Čihařová

There is nobody like her. Nobody with such long career in animation in the Czech Republic. Moreover she combined several professions as animator, director and then as a teacher with big influence. She taught students like Alexandra Hetmerova or Katerina Karhankova, who are successful representatives of contemporary young generation. They are still in touch with Libuse Ciharova, and mention,  among other things,  how she encouraged them to make films for children. And still they are doing it, and seriously... May be with the important help of her, there is a new generation of Czech animators, for which animation for children doesn't mean stupid and bad -Pavel Horáček, Programme Director

Until recently,  Libuše Čihářová was passing on her invaluable experience and passion for animation on to the new generation of animators as a pedagogue at the Department of Animation at the Film and TV School of the Academy of Performing Arts in Prague.

The Lifetime Achievement Award will be presented to Libuše Čihařová at the opening ceremony of the Anifilm Festival on 1st May. Anifilm takes place 1-6 May 2018 in Trebon, Czech Republic.