This week, Zippy Frames attended the re-scheduled Cardiff Animation Festival. The short films are presented in a series of categories. Here is a selection of festival highlights.

Brilliantly atmospheric short, about a young girl's relationship with her Father. The film deploys handheld camera movements to build a tactile and taut atmosphere. The girl interprets the world through an internal, animal understanding, seeming to connect with birds and falling from her home through an endless bird's nest to land on the ground outside. This unusual and strikingly original work uses emotive facial expressions and a delicate and sensual soundtrack, bringing objects and emotions to life.

A thoughtful film, comprising a phone message left by a woman who has just quit her job. The imagery signifies her mundane everyday existence, and she explains her reasons for needing to break free of this drudgery. A garish colour pallet emphasises the caller's growing disillusion with her routine existence.

My Dad's Name was Huw, He was an Alcoholic Poet. Director: Freddie Griffiths.

In this RCA film, a son recalls his deceased Father's alcoholism, through the Father's poems. A bleakly sensitive depiction of the spiral of addiction and its destructive impact, focusing specifically on male introspection.

An inventive RCA made short about a fisherman, using great repetition of sound and visuals, and strong elongation of drawing and angularity to build a slightly claustrophobic sense of being alone space on board a small boat out at sea.

A moving film that recounts how identical twins survived Auschwitz; this film explores how forgiveness may set the victim free of the past and depicts harrowing content. The Lonely Orbit. Directors: Frederic Siegel and Benjamin Morard. A nicely designed film about how our lives are shaped by global communication and satellite technology, showing how technology can be alienating, and how life affirming face to face contact can be.

An interesting and unusual exploration of darkness and light in human experience, using a cosmic landscape to map out the spectrum of feelings, such as falling into a deep hole of depression. There is a sense of childlike wonder at the landscape, through sensual storytelling and cosmic visualisation.

A skilfully produced fabric stop-mo, about a woman involved in a hit and run, who flees the scene. With strong production design and lighting, the film was made by RCA students, with support from Passion Animation Studios.

A great film, made with the support of Moth Studio, which sensitively and intelligently depicts the relationship of two sisters, and how this is impacted by pregnancy. The graphic style is clean and precise, suiting the honesty and compassion expressed in the voiceovers.

Made at CalArts in 2019, this great short uses simple but highly effective character design, and lyrical and convincing forest and townscapes. Two children go on a mission to find the ghost of a woman who was murdered for being a witch. The interactions and expressions drive the story well, developing a strong sense of empathy with each character. 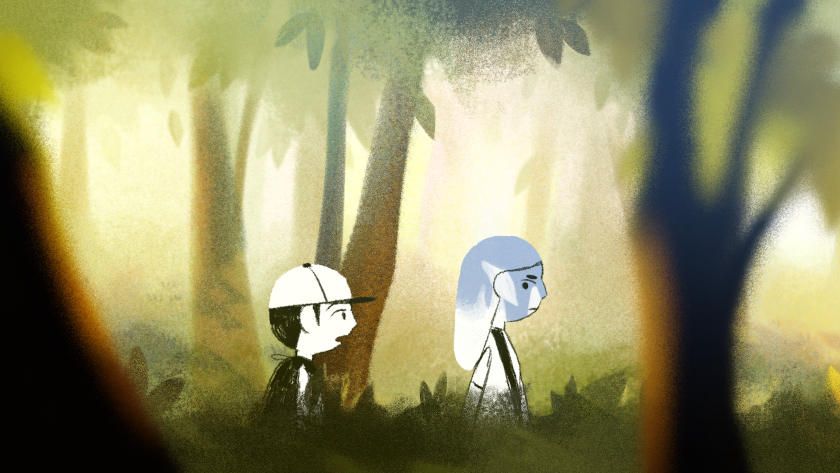 A well-made poem-film combining hand-drawing with photos and footage, reflecting on the experience of coming out as a gay teenager.

A French film, using a hand-drawn rotoscoped approach; two teenagers walk out into a snow filled landscape to go sledging. The film deploys a minimalist, white-out landscape and an evocative whistling wind to build a sense of being alone in the Winter environment.

Made at Winding Snake Productions in South Wales, this very interesting film explores the relationship between two women. Visiting a small coastal town, they decide to sail a ship, made from a floating leaf and a miniaturised lamppost as a mast, into the ocean. Encountering a monster and a storm, they confront their personal fears. This is an original film, with dialogue in Welsh, with a nice sense of fantastical transformation, combined with a strong woodcut aesthetic. 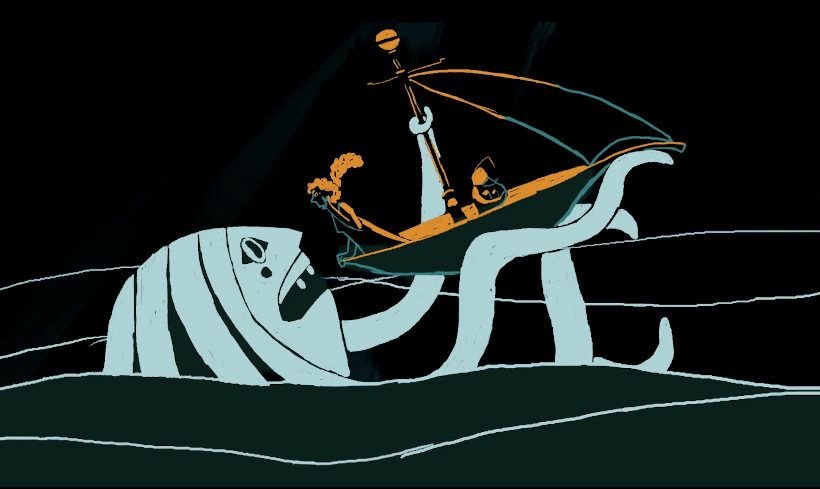 ...And then She Kissed Me!! Director: Alexia Khodanian.

This sweet and beautifully painted film shows the growing love between two teenage girls. Soundtracked by "And then she kissed me", by St Vincent, and made at CCA Animation, in Calfornia, this is an uplifting and joyous tale about falling wildly in love.

A graduate film made at UTS, Australia, this stylish animation shows a mobile phone POV of a young woman's day unfolding, as witnessed by the phone.

An inventive approach, combining 2d faces/hands with stop motion clothing. Set on board a high-speed train, the film follows several passengers on their journeys. The technical innovation makes for an interesting film, but the story lacks depth.

A beautiful cosmic journey, with star constellations and continuous transformation.

A one-minute stop-mo, following a fish swimming in the ocean, encountering an ocean of plastic waste.

A sensitively made exploration of a hunter as she tracks and kills bears. Using atmospheric hand drawn landscapes, rendered with a charcoal-like quality, there is a thoughtful and tactile quality in the storytelling of tiny figures in a big landscape.

An interesting black and white film, about a domesticated dog that has been taught to behave like a human, eating at the table with a knife and fork. One night, a pack of fierce dogs gather outside the house, and the humanized dog is drawn to them. This is a graduate film made at Bezalel Academy of Arts and Design, Jerusalem.

Combining nice hand drawn environments using a 2d/3d cut out process, along with 2d character animation, this film explores an interesting aesthetic. Houses float around out at sea, and an interesting section shows strings on a cello transforming into waves at sea.

Set in a frozen landscape, the landscape is being mined for blocks of ice containing different organisms - birds, frogs, dragonflies. With a mechanical, repetitive rhythm through editing, this stop-mo film uses highly tactile textures and foley to contemplate mortality and our impact on Nature.

This highly original and darkly funny tales follows a young woman as she goes to workout at her gym. After a sweaty session, she becomes aroused by her reflection. Fuelled by pumping techno, the whole gym gets caught up in a strangely self-aroused state. The film uses a jagged and punky style of representation, giving it a sharp sense of social critique.

The festival featured a big range of approaches to animation from different contexts, both UK and international. Student work from postgrad courses featured widely, with most of the UK student submissions coming from the RCA. It would be great to see more postgrad films coming from other institutions, in order to see the work of the spectrum of animators across the country and at Welsh universities.

One film deserves special mention: Nettle Head. Director: Paul A. Cabon. This knockout film follows three teenagers as they ride their bikes into a forbidden zone. Entering a weird forest, they discover spooky creatures and threatening environments. This film uses great lighting to build the atmosphere of the interior of the forest. The excellent foley builds a highly visceral experience of a journey into a heart of darkness, with breathing and sounds of distress building the tension. The forest landscapes are reminiscent of the lyrical paintings of Raoul Dufy; however, the lyricism has been re-purposed to build a dense and intimidating environment, with echoes of '70s sci-fi films and Apocalypse Now thrown into the mix. This film is unusual in how it draws you into the protagonist's subjective experience, and the sound and colour are key to this sense of immersion; a groundbreaking work and the standout film of a great festival.

Joseph Norman was a guest of Cardiff Animation Festival 2020.