Today the Piccolo Animation Festival begins; a festival as particular as extensive, as well-structured as intense. The festival has many qualities but, above all, it is the gift of ubiquity that makes it unique. But what I mean when I write ubiquity?

PFA is not the classical festival that takes place in a single centrical city. The Piccolo Festival takes place in several cities within the Friuli Venezia Giulia region in northern Italy. And no, it is not a new project with innovative ambitions: the Piccolo Festival di Animazione started already 12 years ago by the hand of Paola Bistrot, the festival and program director. Paola is a teacher of History of Contemporary Art, Contemporary Art Language, and History of Drawing and Graphic Art at the Academy of Fine Arts in Venice and if it is not enough, she is one of the greatest exponents in curating and promoting animation in Italy both inside and outside its borders.

But let's go a little slower in illustrating the scope of the Piccolo Festival di Animazione. This year the charming cities of Trieste, Udine, Pordedone, Gorizia, San Vito al Tagliamento, Palmanova and Venezia will be hosting the festival. Seven cities that will join in to celebrate animated art. With its screening program of 80 short films and its strong offer of diverse events such as masterclasses, feature films and performances, the 12th edition of the festival predicts a great closing of the year for all animation lovers in Italy.

I had the opportunity to attend the festival last year and I must say that it was a great experience, the organization and the reception by the team were very pleasant. The program selection and the short films' quality left me with a delightful aftertaste. It showed me the academic professionalism of those who make the Piccolo Festival possible. I noticed that the programs were very well balanced: there was a mixture of both well established authors and new young talents. The visual and music animated program was an exploration into the boundaries of these two disciplines, very eclectic and attractive. The panorama section offered a meticulous selection with the best animation films on the international scene. Though one of my favorites was the erotic animation program curated by Rosalba Colla. By watching this year's PFA program, I can tell that it is going to be another fabulous edition!

It is worth to emphasize Paola and her team's ability to get different cultural institutions and seven cities administrations involved in the same project and to take up the mission of offering high quality events related to the animation industry (but not exclusively). Theirs is a strenuous work that gives the festival a very special character.

This year, the festival opens in Trieste with a Masterclass by Lorenzo Mattotti, comic artist and director of the feature film The Invasion of the Bears in Sicily, based on the work of Dino Buzzati. The director will also be present tonight at the screening in CinemaAriston in Trieste to introduce his film. Another Mastercllass not to be missed is Tesla, to be given by the visual artist Igor Imhoff. The appointment will be at the Conservatory Tartini in Trieste. Igor Imhoff also signed the trailer for this year's festival edition.

The best animations for children and teenagers will be presented at the Cinema Centrale in Udine. Animakids and Animayoung are film selections addressed respectively to elementary school children, and middle and high school students. These programs also aim at showcasing different aspects of animation-making, its different techniques from cut-out and puppet animation, to digital animation, in order to inspire young students to try them out on their own. Also two episodes of the mythic cartoons: Il Signor Rossi  by Bruno Bozzeto and the Professor Balthazar created by Zlatko Grgić, will be screened to show the magic of classical animation.

Meanwhile older students will enjoy the activity organized by Cosimo Miorelli about live video animation. Furthermore, the animated shorts made by students themselves during the workshops held at local schools and at the Venice Fine Arts Academy will be presented.

The highlights for this edition

The show Graphic Novel Is Back–Unplugged by Davide Toffolo, the singer of the rock band Tre Allegri Ragazzi Morti. He has invented the show to let us plunge in his new, homonymous, comic book. It is the biography of the anti-star of Italian independent music, that with his songs and his comics has marked at least three generations and it will be staged through songs, hilarious stories and interactive games with the audience.

The sixth volume of the series Italian Animation will be presented by two tireless animators and promoters of animated art: Andrea Martignoni and Roberto Paganelli.

Flusso by Massimo De Mattta, Cosimo Miorelli and Stefano Giust invite us to a narrative flow based on improvisation and reciprocal suggestion. A direct dialogue with the audience's imagination.

On Friday 13th the multi-award winning comic artist and director Igort will introduce his film 5 il numero perfetto (5 The Perfect Number) starring the marvelous actor Tony Servillo. The feature film is based on Igort's own graphic novel. This will take place in Pordenone and Udine.

Just before the closing ceremony on Sunday 15th, Igor Imhoff together with Patricia Oliva and Stefano Giust will perform the Planet of Falling Paths. The show is a small journey towards the Moon starting from the concept of lunar attraction – an ancient constant for men and animals –, progressing through the 1969 context, and concluding with the reflection that everything goes up will eventually fall back down on Earth.

The jury of this year is formed by Igor Imhoff, Carlo Montanaro and Andrijana Ružić. They will be in charge of choosing the winners of the 2019 edition of the Piccolo Festival di Animazione. 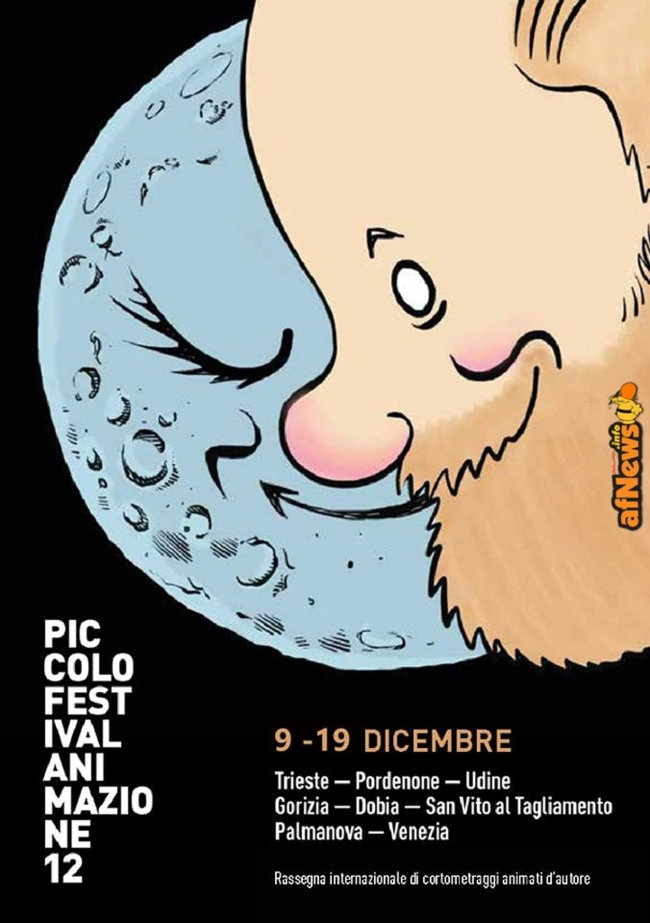 But in the Italian spirit that “nothing is over, till it is over”, on Thursday 19th the Piccolo Festival gives us an extra gift: the reconstruction of The Party in Paradise (La Festa del Paradiso) based on the commissioned work made in 1490 by Leonardo Da Vinci for the wedding of Gian Galeazzo Maria Sforza and Isabella d’Aragona. Here dance, music and interactive animation will create a very special show for the audience in Trieste.

The Piccolo Festival is an eclectic, dynamic but friendly festival. With its spirit of deconstruction and without a single center it paradoxically constructs a cultural offer without comparison. If you are around the cities above mentioned don't miss the opportunity to enjoy their exciting agenda.