The Brussels Anima fest made a surprise choice (even according to the winner of the Grand Prix) when giving out his main prize. The jury decided to award the  festival's Grand Prix to the Swedish filmmaker Niki Lindroth von Bahr for her short film Simhall (Bath House), full of deadpan humour.

The international jury, comprised of Stéphane Aubier (Filmmaker, Belgium),  Marco de Blois (Programmer-Curator at la Cinémathèque québécoise, Canada) and Eija Saarinen (Specialization Manager and Senior Lecturer in Animation at Turku University of Applied Sciences in Finland) raised her precise direction, the uniqueness of the universe, the simple and effective humour, the strength of the characters and the description of a social context.

The filmmaker takes away 2,500 Euros, offered by the Région de Bruxelles Capitale

Special mention was given to Storm hits Jacket (Tempête sur Anorak) by Paul Cabon and Vivement Lundi (producer), a crazy story of a cow storm.

The international jury awarded the prize for the best graduation short film to UK student Nicolas Ménard for his exquisite urban satirre Loop Ring Chop Drink, along with a special mention to Small People with Hats by Sarina Nihei, also from the UK.

The junior jury from Radio BoBo awarded their prize for the best short for a young audience to Le Vélo de l'éléphant by Olesya Shchukina (B/F), and also gave a special mention to the Franco-Belgian-Swiss co-productionDimitri à Ubuyu by Agnès Lecreux and Fabien Drouet.

Alexandra Hetmerová's Mythopolis received the audience award for the best short film, and the Anima public also chose Extraordinary Tales by Raul Garcia (Luxembourg) as best feature and The Nut Job by Peter Lepionitis (USA/CA/KR) in the young audience category. (The competition prizes of Anima festival for feature films are selected exclusively by the audience).

The jury for the national competition was comprised by Špela Čadež (Filmmaker, Slovenia), Jérémie Degruson (Filmmaker, Belgium) and Anton Roebben (Filmmaker, Producer, Belgium). They  gave the Sabam award to Het Paradijs by Laura Vandewynckel, and was particularly charmed by the director's sensitive approach to a current and universal topic.

They also awarded the Grand Prix of the Fédération Wallonie-Bruxelles to Dernière Porte au sud by Sacha Feiner, the SACD award to Deep Space by Bruno Tondeur and the TVPaint award for best graduation film to Hondenleven by Pieter Vandenaebeele from KASK in Ghent.

Press Award for Best Short:  provided by the magazine Be4MAg (500 €) Through the Hawthorn, Anna Benner, UK 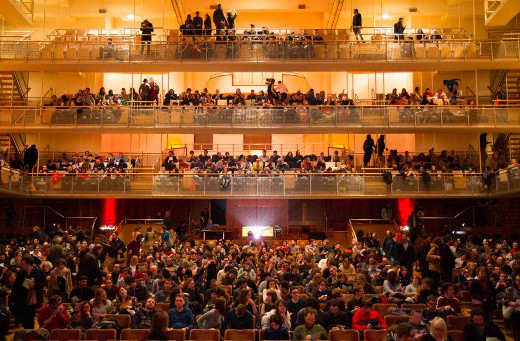