For a person who made his first short just 13 years ago, this a road of animation festival success. Born in Versailles, Franck Dion made a career as an actor, illustrator and theater stage designer, before entering the world of animation with his 2003 short Phantom Inventory (L'inventaire fantôme). Annecy festival has been a place for awards for the French director: his third film Edmond was a donkey (2012) won a Special Jury Prize, and finally he was granted the festival's biggest prizes, the Cristal D' Annecy for his The Head Vanishes.

International awards (see here for a complete list for Edmond was a Donkey) only emphasize that here is a director who has a specific, clear vision of his characters, their aspirations and the society they have to fit in.

The Head Vanishes (Une tête disparait) is a co-production between Papy3D (Franck Dion, Richard Van Den Boom), National Film Board of Canada (Julie Roy) and ARTE France (Hélène Vayssières). The old lady Jacqueline isn't quite in her right mind anymore, but she's determined to take the train to the seaside, as she does every summer. Only this year, she's constantly being followed by some woman who claims to be her daughter, and the trip takes some unexpected, fantasmagorical turns [watch the trailer]

This very simple in its creation short (Dion earlier had imagined it more 3D complicated, but went on for a simpler look) is both suggestive, and full of a hazy atmosphere -like the windmills of Jacqueline's mind. It's not the first time that mental illness has been portrayed on the animated screen; still, it's here presented unapologetically strong. Dion doesn't judge his characters as ill but as wanderers and active human beings.

Franck Dion talks to Zippy Frames about The Head Vanishes, and his vision of his own animated work.

ZF: You used Oscar Wilde's motto "My personal affairs always bores me to death. I prefer the affairs of other people" in your first film, The Phantom Inventory. Why are you interested so much in the lives of the others?

ZF: Your characters may be outside the mainstream, but they are certainly active. They keep walking, travel, investigate, they do things.

FD: It is La Comédie Humaine! It is very important for me and the characters to be in the real world, even if they are cast aside. 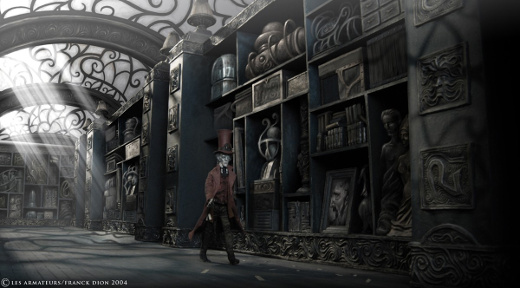 I want to show their human side. They try to keep track of their real life, which is also part of the human side.

ZF: What about the animal side? Two of your films, Edmond Was a Donkey, and The Head Vanishes use animals (donkey, fish).

FD: It is on purpose, not accidental at al. I started with Edmond Was a Donkey, and then I drew animals on my own Facebook project, Les voyages imaginaires de Franck Dion.

The animal side is actually our human side. The reactions, the feelings of the animal, even the sounds. I provided my own voice for the rooster sound in Edmond. I love poultry, don't ask me why. I also have a project Animalis Machina with NFB, where animals will be in the project.

ZF: What's the project about?

FD: The title goes back to René Descartes' notion that animals had no soul, they were mere automata. With all due respect, I surely want to refute him. I mean, he was dumb! I do like his ideas, but not this one. So, this project will be a i-Pad application to refute Descartes.

ZF: The setting in your films, particularly the buildings,  is really noteworthy. Buildings function like boxes that keep people inside without the air to breathe. In Edmond, for instance,  the main character refuses to take the eleveator to the office.

FD: I am very interested in architecture and the way to express the fantastic element through the architecture. 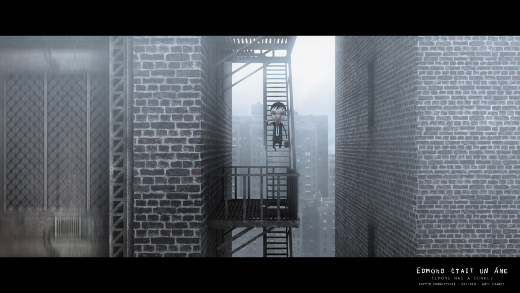 Edmond Was A Donkey

What I really like is a big building placed alongside a very small character, and I really like to continue in my next films. I very much like the link between scene and cinema.

ZF: You've worked in the theatre as both an actor and a set designer. What kind of theatre do you prefer?

ZF: How did you first get involved in animation? Did you study animation at a school?

FD: The only official training I got was as an actor, also I worked as an archivist, but did not study animation. I am self-taught. I left school at 16 years old: I was always drew things, making sculptures and photograph them. My first official publication was in Casus Belli, a French magazine about roleplaying games in 1989, a very respected one. At the time, it was the only magazine which would accept work by young illustrators.

ZF: Did you act at the theatre at the same time?

FD: Yes, I had to earn my living. My debut was on stop-motion. I did Monsieur Kok in cut-out. 3D animation started with Edmond was a donkey. 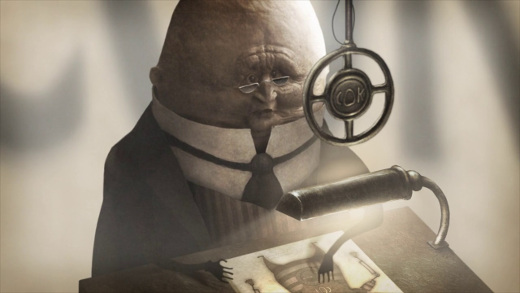 ZF:  Your films may use your different techniques, but there is a pervasive common element, and not just in terms of narrative. Staging and lighting has also a very strong role in your films.

FD: This is very normal for me. I was always happy and excited about the light when I was an actor, especially with the stage curtain and lighting on stage. I stayed after the show and watched: you just turn on a light and everything changes. This is what I want to bring on my films, independently of any technique. I'm very excited to work with lights. It's like a play.

But also in cinema, I adore the 30s films in expressionism, impressionism, and film where lights were very important. Take for instance, the films of Jean Cocteau, or the excellent lighting in Robert Wise's The Haunting (1963).

ZF: Your films look like a monologue or even a two-character theatre play, which is intimate like your subject-matter, mental health. Which comes first, the staging or the concept?

FD: Mental illness makes him talk about the human. I do not in any way take sides on whether this is a disease or not. In terms of drama, the character fights between the illness and himself. And this is a very interesting proposition to make a film about. We use the character's voice, not the look the others may have on him. It gives me the opportunity to talk about human beings and their own view, their interior conflicts.

ZF: How did you come with the idea of the head being cut off ?

FD: When I was eleven, my great-grandmother was always taking care of herself, being elegant. My mother Nicole. was her favourite grandchild. When she was 6 years old, my great grandmother was in the hospital, and she suddenly said to my mother: "Nicole, can you look for my head under the sink? I think I've left it there".

My mother told him about the incident; it touched me, so years ago I used it in the finished film. It was really very strong in terms of imagery. And, of course, it's a pun on the French expression "J' ai oublié ma tête".

ZF: I really liked the sub-story of chicken, whose head was chopped off, but could still live in The Head Vanishes.  It is like having the impossible: having your cake and eat it too. Both funny and depressing.

FD: I prefer the term "melancholic" for my film. Regarding the chicken anecdote, this was not my idea. It is based on a story I read in the Internet about a farmer in the US of the 30s (and it may be a myth, for all it is concerned), where a farmer was earning money of a chicken, who had previously its head chopped off, for three days in a row. When the dog ate the chicken, the farmer tried to replicate this, but without success.

So, I appropriated the story to fit in the film.

FD: Papy3D was made 10 years ago in Paris. All directors had made their film with another production company, and it did go very well. But, at that point they wanted to produce themselves, and Papy3D was created. But in Papy3D each director (Jérémy Clapin, Sarah van den Boom) self-produces his or her own films. There is democracy in this procedure. Being a producer is a real job, you cannot decide to be a producer.

ZF: How did the co-production with National Film Board of Canada (NFB) start?

FD: The co-producer of Arte Channel, Hélène Vayssières, proposed me to meet Julie Roy, now the executive producer of the French animation studio of NFB (she was a producer at the time).

This collaboration started with Edmond was a Donkey, it continued with The Head Vanishes, and now we work together on the i-Pad app. 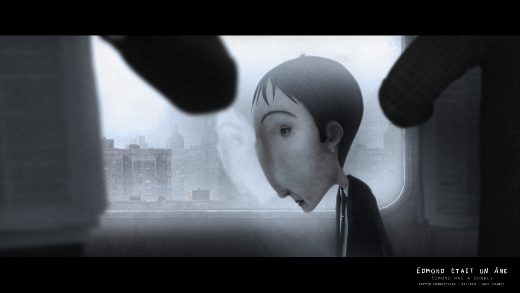 Edmond Was A Donkey

ZF: Are you satisfied with today's French animation and independent animation? What's your opinion?

FD: I'm not a huge spectator of animated films, but I'm a passionate cinema viewer. But I find that the animation cinema in France has a lot of creativity and fine project; and the reason for that is that the government and CNC fund animation for short and feature animation films. Compared to other countries (e.g. Italy) we are lucky to be funded like this. Yet, creativity characterizes not only French animation but animation at large. It is the format for its director to be more expressive, creative and having good ideas.

ZF: Can you name me some cinema influences? And do you think it is necessary to do animation to watch films or is it OK if you just draw / create on the computer?

FD: I love the animation cinema, even if it is not my preferred cinema. When an animated film inspires me or touches me, I look at the loop! I have great admiration for the short films of Jean-François Laguionie, for instance. Films like Chris Landreth's Ryan or the films of Igor Kovalyov touch me a lot too.

Regarding live-action cinema, my list of favorite directors is very wide. I like a lot of directors, Stanley Kubrick, Alfred Hitchcock, Claude Sautet, Federico Fellini. And, yes, the title of The Head Vanishes is a nod to the 1938 Hitchcock film, The Lady Vanishes.