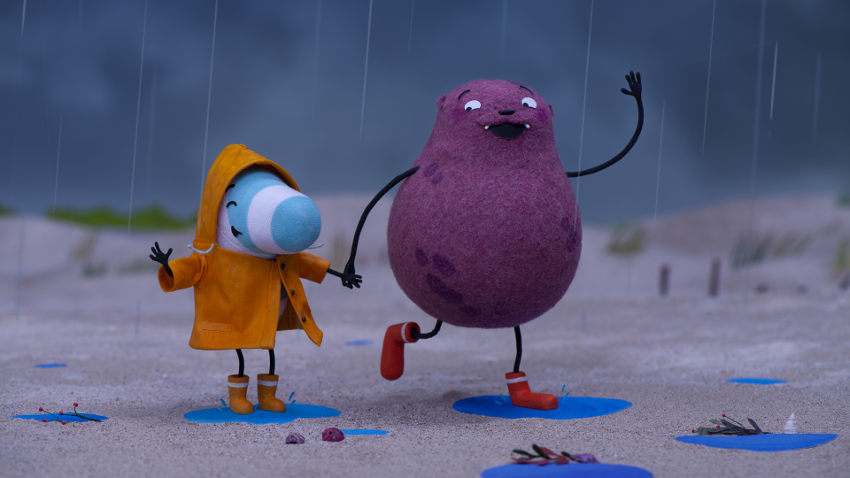 It was one of the most-attended CARTOON FORUM pitches, and it is bound to be in stop-motion. The TV series animation project Mousse & Bichon (production Vivement Lundi!) is an odd couple story based on a children's book “Mousse” by Claire Lebourg.

Mousse and Bichon is not a typical duo. Mousse is a sock, quite introverted and shy, while Bichon is a walrus, who is extroverted and talkative ! Mousse lives in a wooden house on a beach and Bichon lives in the ocean, but comes over to Mousse’s place everyday to play with him. Their stories are narrated to the rhythm of the tide, which flows into Mousse’s living room every evening to spend the night. In the morning as Mousse wakes up, the tide leaves the living room, always leaving behind little seashells or a surprise for Mousse.
Narrated with a poetic and comic touch, Mousse & Bichon is a series that talks about looking out for one another and helping each other out. Despite Mousse and Bichon’s different views on the world, they are best friends who discover the world around them hand in hand. . - Project Synopsis

ZF: How the whole thing get started?

RB - VB: It was a school project. We both studied at La Poudrière school in Valence, studying animation direction. We had to develop a a book for a TV animated series as a University project. We chose to develop “Mousse” by Claire Lebourg, for we were very charmed and inspired by the book itself. At the end of the year, we presented it to a couple of producers as part of our study project. But we wanted to continue the development after graduating, so here we are at CARTOON Forum.

ZF: How much did the project change from school presentation to a pitching project at CARTOON Forum? 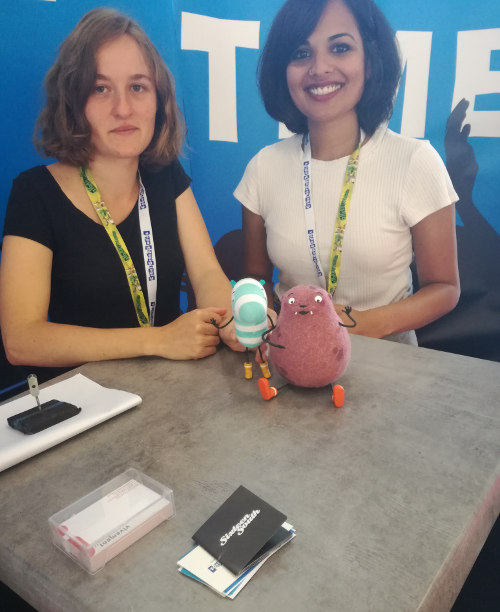 RB- VB: It changed a lot: In La Poudrière, the project was Mousse, now it's Mousse and Bichon. The character was already in the book, but as a side character; we didn't develop this character as part of our school project. However, we now wanted to make our project a duo, and bring Bichon more into the light.

ZF: Was Mousse always a sock?

RB-VB: It was always a sock for us. In the book, it would seem to be a sort of animal (a pig or a rat); still, when children were reading the book and see the drawing, they realized and said "It's a sock!"

ZF: How did Vivement Lundi! become associated with the project?

AA: Both directors are developing the story and series as a whole together at this development stage. When the series is in production, we'll collobarate with professional screenwriters. But I think it's important for the directors to have a clear view and development of the project itself.

ZF: Why did you conceive this project in stop-motion? 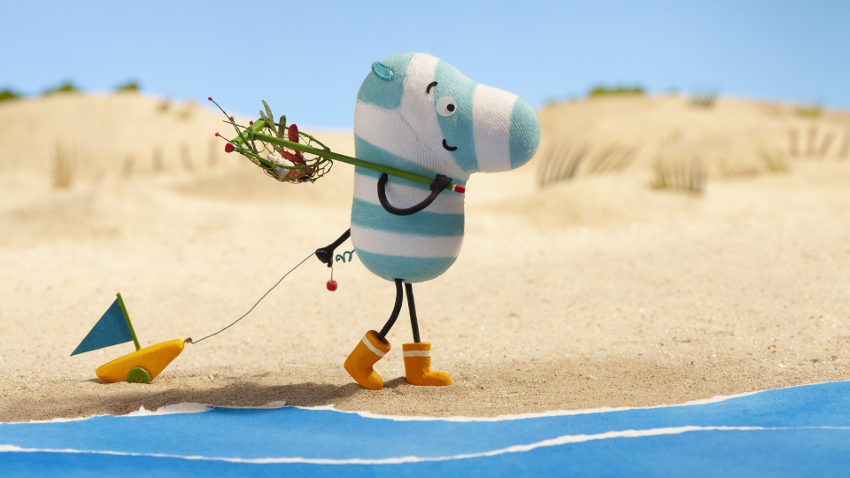 RB-VB: It's a sock, so we have to show the texture of the sock in Mousse. And, obviously, we had experience with stop-motion before. Our graduation films are in stop-motion: Olivia by Rosalie Benevello and Sunday Morning by Vinnie Bose.

ZF: How contemporary is the stop-motion technique for TV audience, and children audience in particular, who grow up with US studio 3D animation?

AA: We do think that for pre-school children is important to have a tactile sensation with objects; children like that.

MC: We had a very positive experience with our previous stop-motion series, Dimitri, both in France and abroad. We had 50 episodes of 5 minutes each, plus two TV specials.

On the other hand, the problem with French TV is that we need to constrain ourselves to this age group, when doing a stop-motion series project. It's different for short films altogether. TV series in stop-motion, though, usually need to confine themselves to this age group. Mousse & Bichon is planned to be 52x5 episodes. We may plan in addition a special as a prequel to explain our character.

ZF: What is your schedule?

MC- AA: We'd like to develop until next summer, and start production before the end of 2020. We plan to spend two years and half for a production, having a team of 6-8 animators. We produce in French language, and there is a possibility for an English version from the production stage -it depends on the production process.

ZF: Did you do your previous films by yourselves? And in which area do you feel more comfortable? Directing, animating, supervising art direction?

RB-VB: Yes, we did our previous films mostly by ourselves. We did have some help, in lighting for instance, and puppet fabrication. But we did both direction and animation. For this project, we'd feel more comfortable in just directing, leaving other creative work to our animation team. But we have decided so far on our puppet fabrication details. Their limps will be in aluminium wire coated with latex. There is an armature inside that makes you move the head a little bit.

ZF: The sea setting was on your book source?

RB-VB: The sea is the universe for our characters, and everything unfolds around them. We did try to keep the spirit of the original illustration in Lebourg's book, and then adapt it to the stop-motion technique, at the same time respecting the artistic sensibilities of the original. She's very happy with the outcome.

ZF: What are the difference between the two main characters? 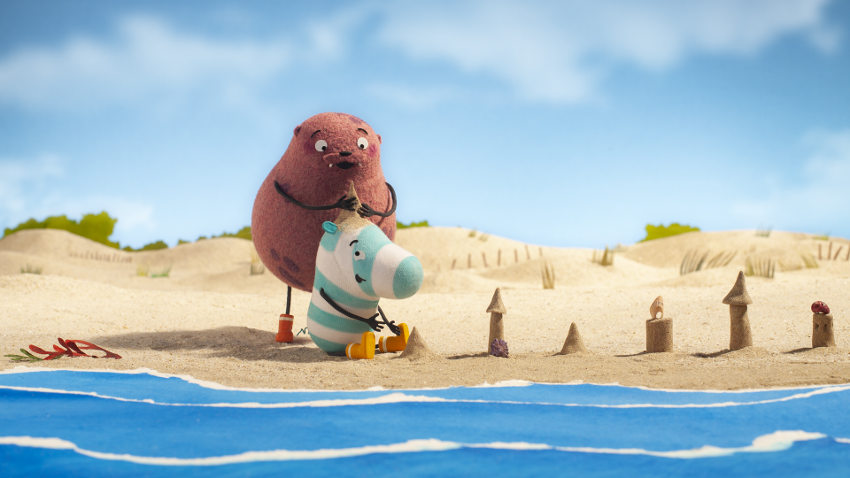 RB- VB: Mousse is the only object who is alive at this universe. All the other characters are animals. Mousse is mostly shy and introvert, while Bichon is extremely extroverted. Mousse is more reserved. He likes to do the things the way he does it. He's organized, likes to collect things. Both are likeable characters; but Bichon expresses his emotions straight away, while Mousse won't do that. They have two different viewpoints on the way they see things, so they are complimentary in terms of character. It's mostly poetic in tone, adding a little bit of comedy.

MC-AA: We'd like to show a palette of emotions, and this our main goal, to explain emotions to the audience with the Mousse & Bichon story.

Both Rosalie Benevello & Vinnie Bose say that this project was a challenge and a new experience ("we keep learning each day"). The outcome of this lesson is the one we eagerly await to watch on screen. 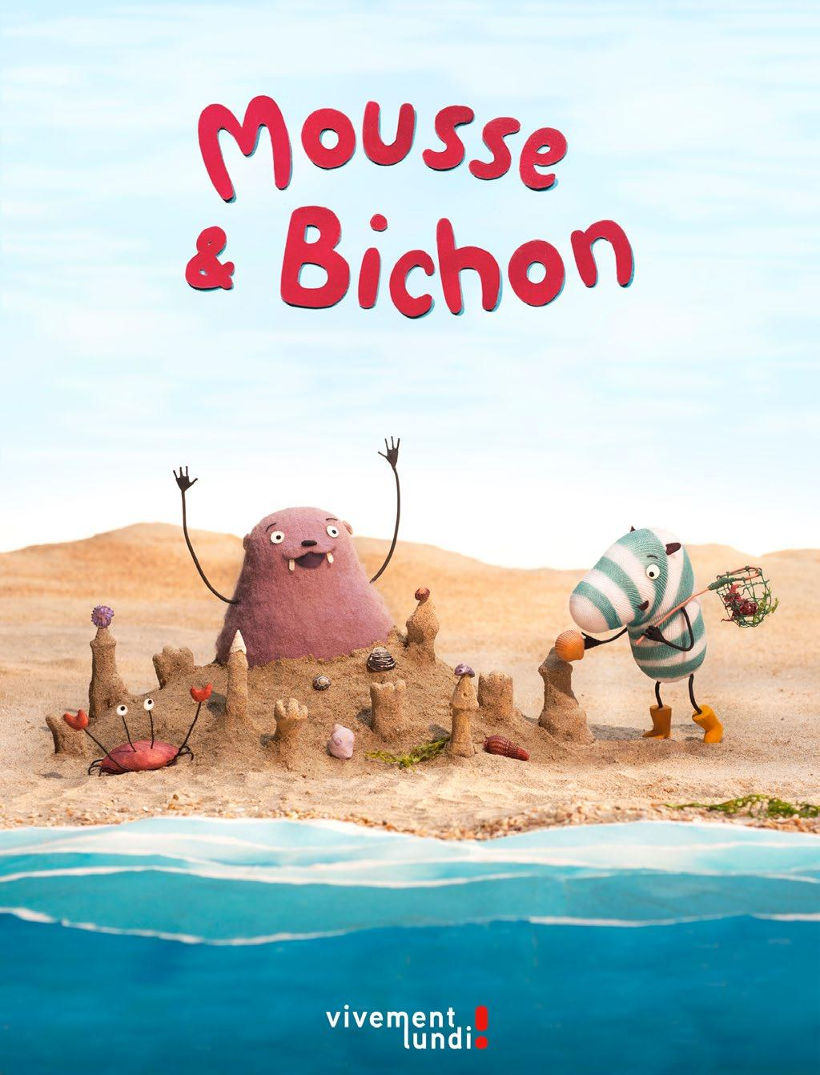 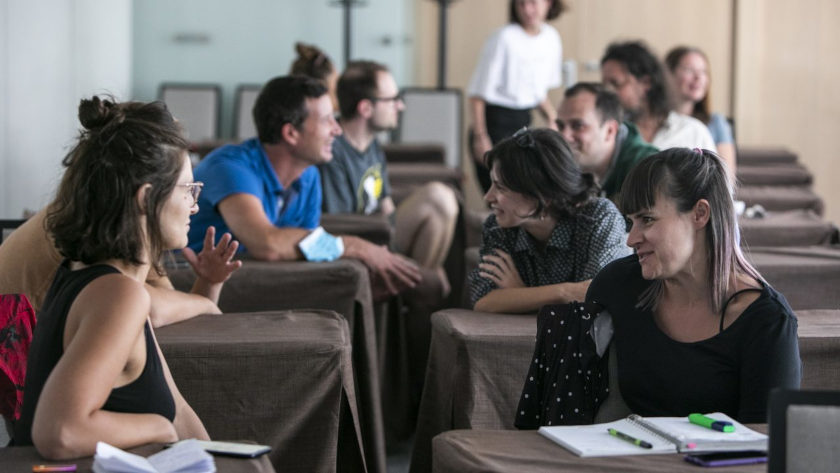