We talked with Swiss animation director Samuel Patthey in our new series of Swiss Animation Portraits 2021.

Samuel Patthey is a Swiss animation filmmaker and artist that carefully observes before he draws. A young visual documentarian of sorts, he was born in Berlin (of Swiss parents), but the whole family soon relocated to Switzerland and Friburg, where he now lives. As he himself says, "Switzerland is a good place for an independent animation filmmaker". 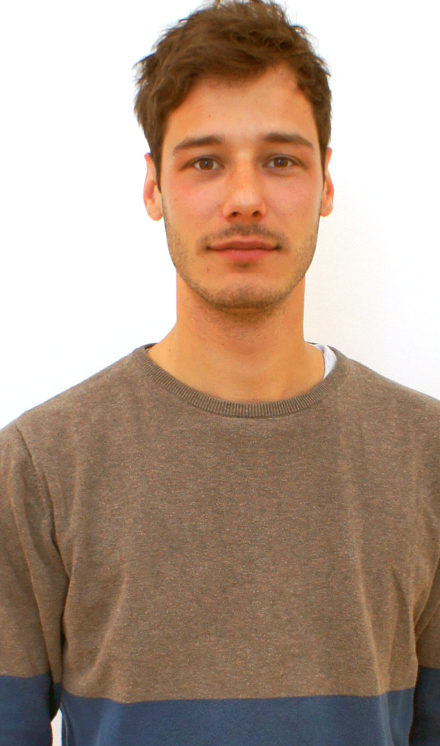 He graduated from Hochschule Luzern (Lucerne University of Applied Sciences and Arts) with his short animation film "Travelogue Tel Aviv", a 6-minute hand-drawn 2D animation short and animation documentary describing the multiplex of interactions in the Israeli economic capital. But he drew and sketched situations and people long before that.

"As far as I remember, I was always drawing," Samuel Patthey tells Zippy Frames. "I really enjoyed analyzing people, the way they are and live. I really enjoy watching them and get the essence of the person". 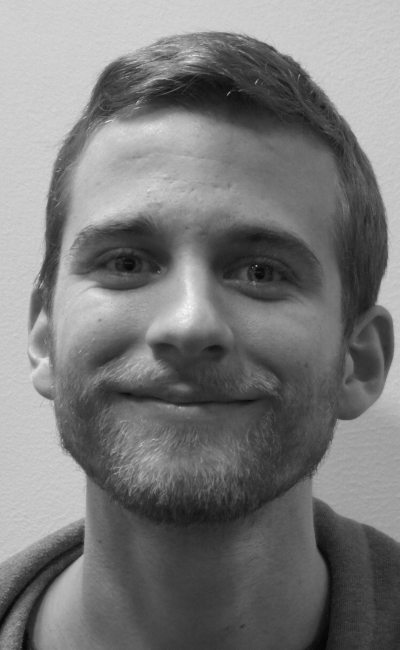 His new film, "Ecorce" (Peel), co-directed by Silvain Monney (picture) and produced by DOK Mobile (Mark Olexa) is another travelogue of sorts, describing a seniors' residence in Friburg, Switzerland, and the imperceptible events that take place between its residents. It has been selected to compete at the Annecy International Film Animation Festival in June.

"The idea came in when I was visiting my grandmother in a seniors residence," Patthey explains. "I was always intrigued by this weird, very small world into another world. Like a microcosm in this 'normal' life. To have this world of imperceptible movements being created". Patthey collaborated with his University fellow student Silvain Monney (''we have this chemistry of moviemaking, and I felt that he fits well into the subject").

Ecorce/Peel presents its layers in a silent and discreet way. Patthey and Monney spent one year in a Fribourg seniors residency, almost isolated in a small forest inside the city. Narration and talking head interviews were ruled out from the start. "I just tried to have the feeling of the place," Patthey mentions.

There was only sketching going on by the directing duo, who tried not to interfere too much with the surroundings, and to capture the little moments in the residents' own life. "Ecorce" was the solidification of the drawing style for Patthey himself -who already had his own inspirations in in movie making from the British filmmaker Stuart Hilton ("he suggested an experimental approach, the deconstruction of a the linear storytelling that I much enjoy"), as well as the US animation filmmaker Robert Breer.

Both directors met all types of people in the residency, from the talkative ones (who were actually looking for connections) to the ones who almost looked unaware of them. They had access to communal spaces (most of which are drawn in the film in particular details), and, sometimes,  to residents' own rooms. Τhey even experienced dramatic incidents such as death. And, lke Stuart Hilton, they tried to de-dramatize events and even movement itself, something that looks the very antithesis of the animation process. And it did make sense in an environment where death is confronted as a sad incident but still an inevitable part of the flow of the community. 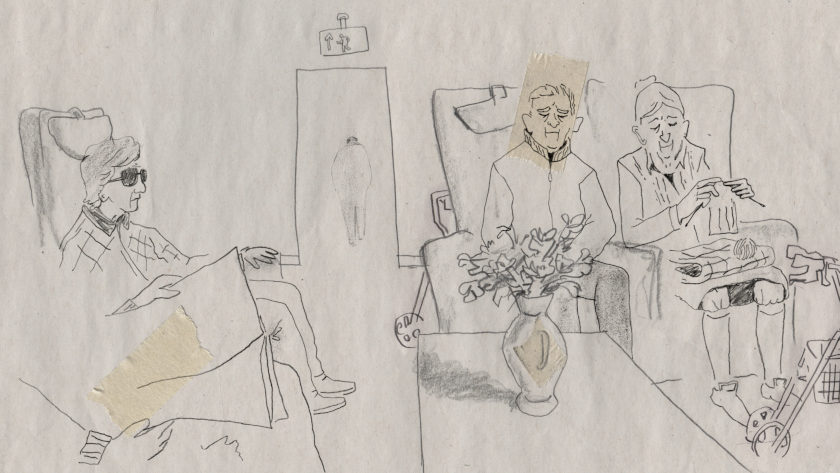 "In Ecorce, we wanted to capture what is time for those residents" Patthey will elaborate. "So, we stretched the scene as long as possible, and tried to get the feeling and rhythm of time. We really fought against the rules of animation, where you supposedly need movement and something to happen to the left and to the right of the frame. Here, it was very important for us to capture a very simple moment and action, which can be boring to animate; but they had to be like that".

De-dramatizing does not mean uninteresting here. It only implies that the editing itself needs to start at the drawing stage, even before animating to achieve what Patthey calls "sensitive and slow animation" of something that is slightly but not completely moving.

When we had the feeling we had enough material to show to the audience, we started editing the material directly. We scanned and printed the drawings, and we put them on the wall; we tried to start and make a timeline, and a continuity of drawings -without any script.  This process was quite long; we had to calculate what will happen if we moved this drawing, for instance, to all the other drawings. It's kind of trying to get to the essence of what we wanted to show - Samuel Patthey

Task allocation started from the drawing stage itself; the two directors drew their own sketches, and they jointly decided on the sketches to remain in the final film (this took them around 4-5 months to see if they fit one after another, testing a different order and so on). After this initial decision, each director animated his own sketches to a scene.

A similar process, also hand-drawn animation, was used in the earlier film of Samuel Patthey "Travelogue Tel Aviv," a film which is half the time of Ecorce (watch it here), but has a similar number of scenes as the new film. The film was the outcome of an exchange semester Patthey took at Shenkar College of Engineering, Design and Art in Tel Aviv; yet the city itself inspired him as well as the studies themselves, and proved to be a breaking point in finding his own style.

"I tried to find the visual style for something that I can relate to," Patthey notes. And the contrast between Switzerland and the almost chaotic world of Tel Aviv helped. "What impressed me was this unorganized organization of the city; this mess and noise, this mix of cultures that I found really interesting and beautiful. The typical Israeli style that I experienced was very open; Tel Aviv has a particular vibe. Not thinking much about tomorrow, but just enjoy the moment now". 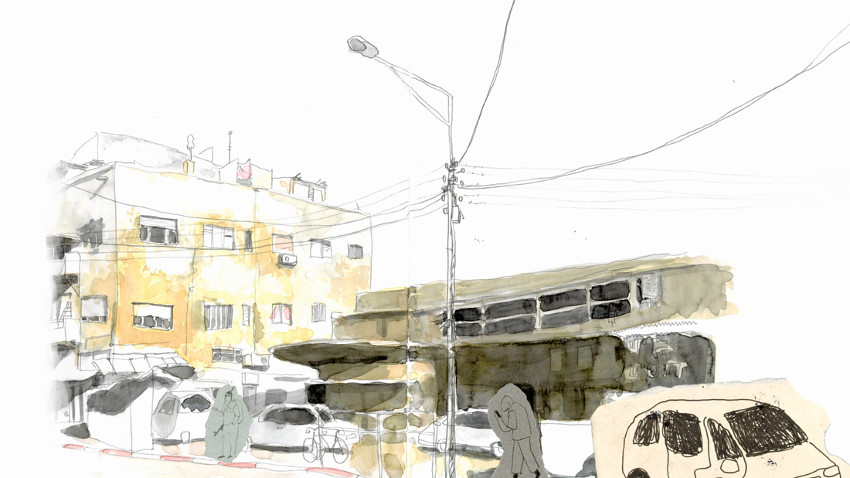 This was something like the moment of liberation for the Swiss animation artist, but everything had been prepared beforehand by his Hochschule Luzern studies, and their vast and diverse approach to the curriculum.

"I decided to study animation because I thought it was a good mix of image, sound and movement that I was looking for". Hochschule Luzern is one of the few Swiss public Universities to study animation. "We had the freedom to do what we wanted to do; we were well-prepared as directors, you can really touch what you want to get". Patthey spent his three years (B.A.) at the school (with teachers such as Paul Bush or François Chalet); not just in order to become a better animator, but in order to let his directorial vision and visual language develop and flow effortlessly. Exercises and short films at the end of the first year were substituted by longer and more experimental films by the end of the second year, before finally making his graduation film -at the same time, being able to attend animation, sculpting, sound classes and labs.

Patthey graduated and looked for a producer for his "Ecorce" project. "In Switzerland, we don't have a lot of independent production companies. We needed someone who would come to the studio and talk to the team; we didn't want something too industrial". DOK Mobile and Mark Olexa came on board, first as a source of feedback and consultant, and afterwards, as a full-blown producer who would be interested in the creative process itself. This collaboration is to be continued in the next film Patthey is preparing, "Sans Voix" (Speechless).

"Sans Voix is sort of autobiographical fiction. It is inspired by my life before and after being a father". It's a film about a young raver that experiences a lot of partying; he's at the moment of life when he's asking a lot of questions -the point when he tries to find his true calling.

This will be a more complex animated film for Patthey, since he needs to explore group animation scenes and the outburst of colors in rave parties ("I think I'm now ready to work more on colors"). Now at the development stage, the film "Sans Voix" has a rough animatic -drawings have already been selected.

Being called himself "attached to the pencil and paper", Patthey really wants to be as efficient as he can in moviemaking in general, and not just in animation, which for him is an extension of drawing.

I draw so much when I'm in the studio developing a project, so I don't draw that much afterwards. There are times that you can draw 8 or 9 hours per day; animation for me is a repetition of drawing, not really developing drawings - Samuel Patthey.

The passion for drawing would worked best at a residency, such as the CICLIC Animation Residency who took place in July 2020. "I would really love to have a residency when I could again develop a lot of drawings' '.

Art is one thing and survival is still another. Patthey has been a teacher of art and drawing (to 17 and 18 year old students), sells his illustrations and paintings, and at times the funding for his films is enough to support him as well. "I think I can figure out some topics that the audience would like to see, and Switzerland would like to fund. I think it's a good place if you're an independent filmmaker to find a good producer. It's a small place, but we have good funding schemes".

Patthey will be at the Annecy festival with his family this June.  "I really enjoyed the vibes. It's always talking and drinking there. It's a very particular festival. If you want more independent animation, you can find it; if you want more studio-oriented animation; if you want to relax at the lake, you can do that".

Patthey's work is both confident and promising; and even if he insists that he wants to balance his workflow and his personal life (don't we all?), it's one of those emerging Swiss animation directors to watch for.