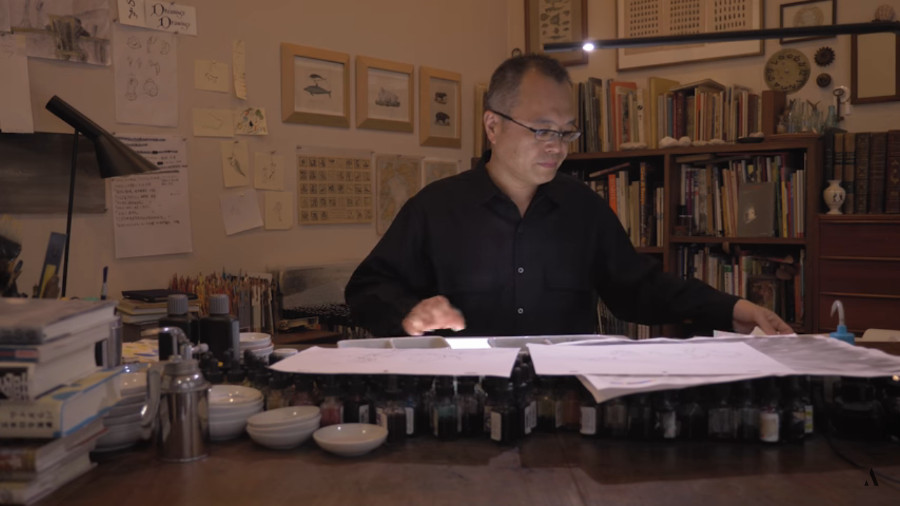 Watch the new documentary on the Oscar-nominated Japanese artist Koji Yamamura by Archipel.

Tokyo University of the Arts professor  Koji Yamamura is a well-beloved name in the world of independent animation, having made films like the Oscar-nominated Mt. Head, the NFB-produced Myubridge's Strings, Satie's Parade and more (here's a small specimen and showreel).

In this new, 20-minute documentary by Japanese Archipel producers, Koji Yamamura reflects on his influences ( Ishu Patel,  Priit Pärn. Norman McLaren are some of them), and makes it known that animation does not stop at the screening room; images and exhibitions are now part of the animated experience, as he himself tries to do with Au Praxinoscope Gallery.

Yamamura tells the story of his Oscar nomination, which started from Ottawa International Animation Festival, and an American producer who liked the 10-minute film he saw; eventually the film was shortlisted and included in the 2003 Academy Awards nominees (lost to Sony's The ChubbChubbs by Eric Armstrong).

Read Also:  Our Interview with Koji Yamamura / Retain A Clear Ambition and Motivation

Even though he still knows the harsh reality of non-funding for films outside the anime genre, Koji Yamamura still evokes a sense of artistic responsibility for what he's doing in this nicely produced short documentary.

Archipel production started with toco toco, a regular series introducing Japanese creators, artists and the places that inspire them. The Youtube channel evolved to now offer more diverse, Japan-centric documentary content with new series or standalone videos, focusing on a wider range of people and aspects of Japanese culture.