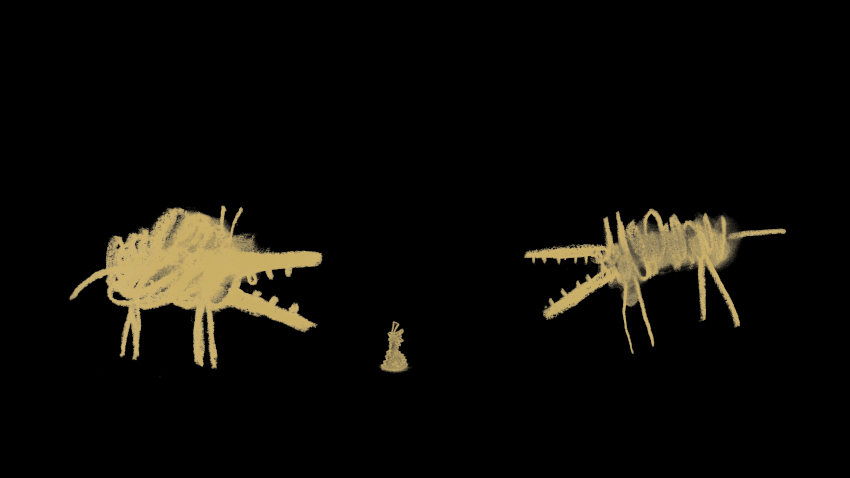 Acclaimed UK filmmaker Shaun Clark makes an Instagram video and turns it into a short animated film in Angry Dogs. Here's what he says to Zippy Frames.

BAFTA-nominated UK animation filmmaker Shaun Clark has a penchant for intense situations depicted on screen -and he creates his own world. His films Lady and The Tooth (trailer) , The Key (co-directed with Kim Noce, more info) are testaments to this, even though he alternates his output with children films as well.

In his new short film Angry Dogs (which started out of an Instagram video) , the synopsis reads; When sleeping dogs awaken rationality quickly disappears.

ZF: It seems like one of those films that became as a result of improvisation. But was it that way? Did you actually use storyboards etc or you had some ideas and then you went directly to animation?

SC: The film came from a small experiment I made on Instagram of a series of dogs barking. These animated experiments were made from only two drawings and a sound recording of myself making noises, which I then sped up. I found the process very quick and was surprised at how much character I could capture through a limited number of drawings. The video on Instagram was well received so I decided to explore the idea further.

From there I improvised a story focusing around the question “why are these dogs so angry?”. I was interested in exploring anger and the blindness derived by it, so I drew a number of random objects like bike wheels, sausages, cigarettes and footballs for the dogs to be angry about. I animated the objects in a living state and a deflated despondent state. Photographed all the drawings and then put the story together in the edit. No storyboards or scripts were used for the film; it was made quickly and in a very direct way.

ZF: Did you always have in mind to make the dogs smudgy?And why did you go for a very limited palette to represent your characters and background?

SC: Yes, the appearance of the dog was created from the materials I was using to draw them, which were a number of soft crayons. The crayons gave off a smudgy appearance when mixed with water that was difficult to control from one drawing to another. The result was a very frantic style of animation that helped illustrate the anger well.

The dogs in the film were colour tinted in After Effects, and a plain black background added. The focus on the film is about pack mentality and blind rage. So I kept all the objects and characters the same colour in the film to reflect a narrow vision, as the dogs are not able to see the world around them in a constructive way because of the anger.

ZF: You have a lot of shots; also, sounds here are as important as your visuals. How did you work with your editor and your sound designer? Was it something specific you wanted to get?

SC: I recorded the audio voices for the dogs and objects so I was able to do a rough-cut of the film with the sound to get the timing of the animation right. The first rough-cut was around 5 minutes 30 seconds, and after this I began to work with the editor Ariadna Fatjo-Vilas. We tightened the structure of the film and worked on the pacing of the scenes. We worked a lot on the timing of the repetitious snoring at the start of the film, creating pauses where we thought the audience might react through laughter. We spent four days editing the film and then sent a locked picture to David Pringle, the sound Designer. David worked with the audio tracks we had cut to and placed additional music and treated all the voice tracks. During the sound design and mix he worked a lot to create space and depth in the sound. As we didn’t have any backgrounds or sense of distance, we tried to create this through the sound.

ZF: Was the initial concept the one that we see in the film, and how long did it take you to put it all together?

SC: The initial concept about anger is still the main theme within the film. As the film very much came together in the edit, the concept and question about ‘why are these dogs so angry’ was easy to sustain and explore throughout the production. There was never a storyboard or written script so we dealt with the question all the time.

The film was made relatively quickly; I animated and filmed all the images in two days.

The rough-cut edit and voice recordings took three days to do. We then spent another 4 days editing the film and three days on the sound design and mix. In total the film was complete in two weeks.

ZF: Would you show your film to Boris Johnson?

SC: Yes, I believe all films are a starting point for a conversation.

Film Review (Vassilis Kroustallis):
Angry Dogs feels like a human inanity suddenly gone haywire. Without a presumed gravitas, it actually works like a well-orchestrated routine being disrupted by the presence of those otherwise friendly canines. Dogs are smudgy, designed to look almost laughable -that's really comedy time- and every object, inanimate or animate really gets in their way. Animation has the sign of mobility, but in Angry Dogs character stillness (but still involving exaggerated movements is the one that causes mayhem. With all kinds of disparate sounds and editing that escalates situations within seconds, Angry Dogs is a reverberating and well-placed satirical look on all times you cannot make the ends meet.

Born in Beverley, United Kingdom. Independent filmmaker Shaun Clark has worked as a director and animator since 2005. His work has been BAFTA nominated and won prizes at Clermont Ferrand Film Festival, London short film festival, Imagine Film Festival and the British Animation Awards. Shaun has held retrospective screenings of his films both in Greece and South Korea and has created films for the BBC, Discovery Times USA and Arts Council England. He currently resides in London where he works as a director at www.flickermill.com