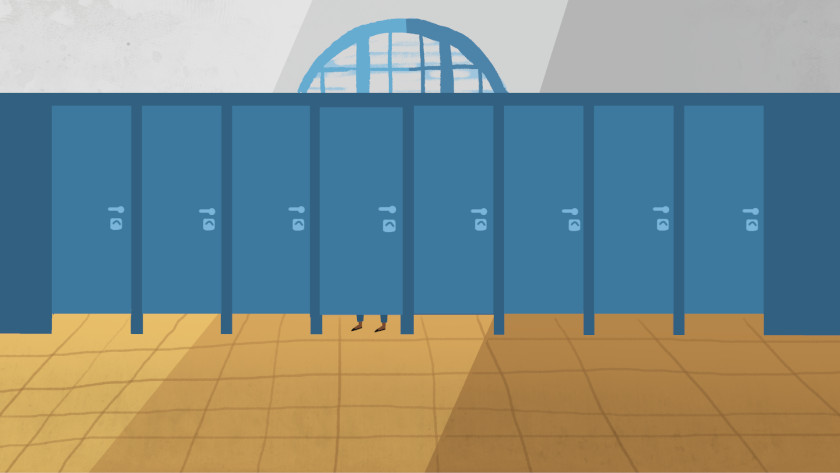 'Bathroom Privileges' looks at some of the difficulties people face accessing public bathrooms. The interior and exterior design of the public bathroom is visualised to convey the lived experience of our contributors Ben, Kemi and Emma, whose stories focus on themes of race, sex, disability and gender. Fantastical elements in animation expose, highlight and emphasise stories and emotions, in particular the unifying experiences of fear and not belonging.

The film 'Bathroom Privileges' will be available online for World Toilet Day on the 19th November 2021. Launched at the Design.Sanitation event, hosted by the Royal College of Art and Helen Hamlyn Centre, you can watch the film and accompanying Q&A with Directors, Rupert Williams and Ellie Land

The idea for Bathroom Privileges came after hearing the interview with US writer and transgender activist Janet Mock saying,’...every civil rights issuehas gone to the bathroom in some sense, you think about black folks in the 1960s in segregation, you think about women in the workplace, you think about disabled folk because it is one of the most universal experiences that we all have to deal with’.

It struck me how I had taken this for granted, a very simple need for the public bathroom was made at times impossible for those who are marginalised. This space can tell the history of communities without power and their treatment by the wider world...what really sealed the idea for me was that everyone can connect with the idea of needing the toilet, meaning the public bathroom is one of the few spaces that connects everyone - Rupert Williams

The filmmakers are Rupert Williams, a social worker, and Ellie Land, an animated documentary director. They used a mixed-method approach to capture the lived experiences of their participants. A distinct ethical method was enlisted, inspired by Williams’ social work practice and Land’s experience in participatory filmmaking. The contributors were involved at crucial intersections of the design stages, semi-structured interviews and peer interviews, which created an intimate and trusting atmosphere between contributors and filmmakers. Character co-design workshops led by Land enabled the participants to have ownership over the animated versions of themselves.