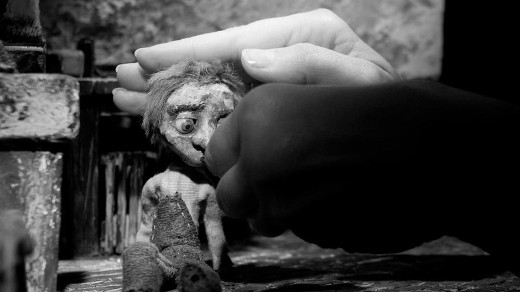 I+G Stop Motion in Catalonia has done puppet animation at least since 2005, with both darker (The Twin Girls of Sunset Street, Canis) and lighter (Grand Prix, Block and Piled) films on their slate.

We take turns in filmmaking mood, Anna Solanas tells Zippy Frames, otherwise it would be overwhelming task for us.

Canis is indeed an overwhelming film, meticulously crafted and unrelentlessly brutal but also genuine. Teo survives isolated in a house constantly besieged by a horde of stray dogs.

Stories of simple brutality (and stray dogs are a constant symbol of that) have been told before. But, like fine works of art, Canis surpasses the shock element that inevitably falls into spectators -and remains long after you watch the film. The film is more like an exasperating effort to find humanity in a world closed behind bars, security dogs and guardians; and find love.

The stark black-and-white aesthetics and the close attention to details (dogs' haircoat and Teo's outfits transform the puppets into savage outcasts) reminds of the archetypal battle between nature and nurture - until departure becomes the only choice.