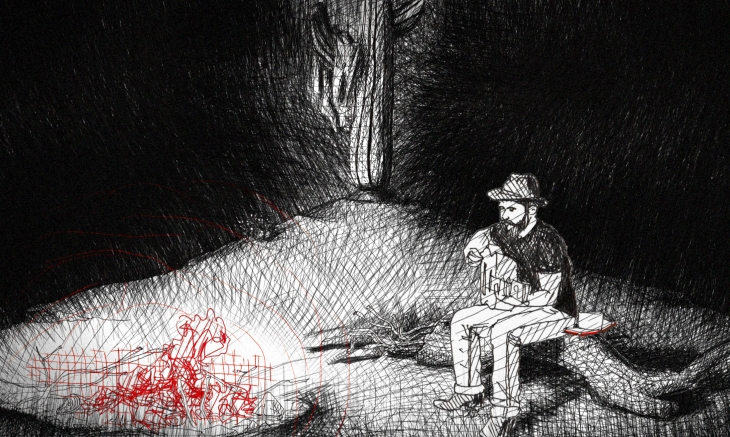 After falling asleep on the London underground, a man finds himself mysteriously spirited into the desert where he follows an illusive trail of a failed love affair. Through the exploration of song writing, the man eventually reaches catharsis and the acceptance that allows him to move on and to find his way out of the desert.

French animation artist (London-based) Quentin Vien has been inspired by both personal memories, Mexican landscape and music to make a film that is a tribute to "London romantic cowboys", as he describes it.

ZF: You look very detailed in your work process, but how did you start? Was it an idea, images, a storyboard or a script? Which came first?

QV: The film was inspired by a sketch book I drew in a few years ago. At the time I was using it as a kind of journal where I would illustrate lyrics that spoke to me. When I decided to direct a film I printed out the content of the sketch book and used it as a starting point for a very rough storyboard. The sketch book was handbound and used the artwork from a Coffee brand named "Deadman's Reach" so in a way the whole thing is inspired by coffee!  (You can have a look at the sketch book  here or even get some coffee).

ZF: Why do you place your character in the US Western desert and not, for instance, in London suburbs?

QV: I grew up in Mexico and I've always loved the Mexican art imagery, I also love the look of America in the 50s. The dream or hallucination in the film represent a kind of introspection or the inner world of the character. His residual image in a way, I liked a lot the idea of illustrating the imagery of a romantic cowboy stuck in London.

ZF: The film was financed by a Kickstarter campaign. What was your experience of the procedure? Is it something you would do again, if you had the chance or perhaps it's time-consuming?

QV: The film was only partially financed by Kickstarter, I published a reproduction of the original sketch book and sold it to finance the film, but it came up a bit short (it's really hard to self publish and sell books). So when kickstart came to the UK I launched a campaign to extend the production. I made the film alone so I took a year off to work on the film.

The experience is very rewarding socially and you feel supported. I wouldn't recommend this type of financing for animation, not at an independent scale at least, the issue is the price of animation per second vs the price of the final product. You can't sell a 10min short film for 20£ so you need to come up with rewards, which means you need to make them and pay for them. You would need to sell 20000 download at 2£ to pay for a film!  In a way the kickstarter was really just a loan, after taxes, kickstarter cost, reward cost and time to send the many rewards you end up with not much left to make a film.

Eventually I used the Kickstarter money for sound design and distribution rather than animation. I'd say the book sales was 10% of the film budget, Kickstarter 5% and the rest was self produced by freelance work.

ZF: Video shooting was followed by selective frame rotoscoping; designs were then shaded and backgrounds added. Is that how the whole thing was accomplished? Did you have any (happy or unhappy) accidents along the way?

QV: Yes, that's pretty much the process, I started by creating a very precise animatic, so that I could work with a strong blueprint. That allows me to work on the film at any time, stopping for a month to go back freelancing for example, and not losing momentum when I come back to the film. I drew all the backgrounds first, so I would be sure of the angles I shoot, then would film and animate (rotoscope) the shots, one by one.

The film is sooooo long and they are so many drawings that I couldn't afford (in time or money) to redo anything, so what you see on screen is the only version that ever existed, with or without accidents. I did correct some drawings in Photoshop, but it was very minor. I'm pretty clumsy so I'd say I'm really happy I didn't spill any cup of coffee over a stack of drawing, statically speaking it's a miracle that it didn't happen! :D

ZF: What's the function of red in your film? It looks like the icing in the cake, it's almost everywhere.

QV: When you live in London Red is everywhere (Busses, Mail box etc), ironically when I arrived in London I only wore black clothes, and one day I got a red hoodie, and I was like "I could get used to that" and now wear a lot of colour clothes. In the film though the Red represents the passion and addiction of the character for his lover and/or alcohol. We start with a lot of red and it slowly fades away until the "Woman in Red" brings it back and rebuilds the character from it. Eventually the character (Jimmy) puts this addiction in the "Deadman's Reach" book he receives, rather than in the Red book he burns, finding a more balanced relationship with his addiction. It's not meant to be understood by the audience but more to give a feeling of evolution in Jimmy's journey.

ZF: How did you select the songs to be recorded and spotted the scenes to appear? Was it a random choice until you found out the ones who fitted or perhaps you had specific preferences from the start?

QV: In a way the songs came first, I had the sketch book and was going on a road trip in the US and had made a playlist for the car. I started doodling cover design for the CD (Remember CD?) and more and more the drawings moved towards illustrating lyrics. I think lyrics are the soul of a song, people often ignore them, I wanted the lyrics in my film to be intertwined with the story, almost like a sang voice over. If you don't know what this is about, listen to the lyrics and they should give you a hint.  In the sketchbook the lyrics are directly related to the drawing, but in the film it's a little bit more loose. All the music in the film comes from Jimmy, or is coming from his world (diegetic music in film terms) until we reach the end and the music becomes filmic (non-diegetic). This was to get the audience into the same mood I was when drawing the sketch book. I really love music.

I 'm lucky to have very talented musical friends. I shared with them my idea of having a musicien character in my film and they offered to record some covers for me, I told them the feeling I wanted to get from the song and off they went and came back with this amazing sound tracks. Mooe recorded "One",  I wanted this song to be what Jimmy imagined Lola singing to him, almost like the saddest lullaby.  Ben franklin Jr is a friend of mine that is a musical genius, he recorded tainted love and summer time and is basically the voice of Jimmy. Mcbess wrote and recorded the end music, I told him: "I need a music that sounds like what Ennio Morricone would sound like if he had played with led zeppelin" and this is what he came up with.

The final song, "Play the game", that sums up what Jimmy feels like at the end of the film, is a cover by Nataly Dawn. I found it on Youtube years ago and though it was perfect, unfortunately I don't know Nataly... But she wears a red hoodie in her video, so she must be an awesome person :D

ZF: Trying an independent animation short is certainly a long procedure, and you need to balance your creative work with the work that gets your living. If you were to do another animation short, would you now avoid or pursue a different creative and production path? Or you would go in the same way?

QV: The huge advantage of working independently is that there is no compromise in the vision. Apart from shortening the film a bit I made exactly the film I wanted. Obviously it's strange and weird and won't speak to everyone. For a very personal project like that, I would not do it any other way. This being said,  it comes with a huge burden, the workload alone is tremendous and exhausting, and could be enough to stop you forever making another film, but then time passes and.. -you know, you kind of want to make another one. It took me nearly 10 years from the day I started drawing in the sketch book to the day the film was over. It's a lot.

I would say this to people that want to make a first independent animated short film: 10 minutes is too much, start small. Find a serious partner for reviewing your work (or better co-direct). Make something you will love and mean something to you. It is so difficult to push the project through the finishing line that you need something to fill your energy until the end.  For my next film, I am still debating if I'm ready to let people interfere in the creative process to make it mainstream; if I do so,  I'll look for production support. But, in any case, I think I'll try to build a team this time, animation is SO MUCH WORK [laughs]

Film Review (Vassilis Kroustallis):
Here's a film that perfectly captures Elisabeth Kubler Ross's 5 stages of grief:  denial, anger, bargaining, depression, and final acceptance (or moving on, in this case). The sketchbook feel evident in the whole Deadman's Reach film makes it look like a story told (here animated) by its author to the audience as both an experience and a work of art at the same time. With the Mexican deserts acting as the environment to bare-it-all (from hats to intestines), a skeleton-like figure can find rest from the red menace all around him by listening to music. Music cues are here the instigators of the successive episodes, and they move forward the character (even in his erratic behavior) in situations he could not go by himself.  Heartbreaks are always sad -but the intimately sung covers bring a welcome relief here. Rotoscope adds to realism, and yet Quentin Vien is concerned with an overall hypnotic and dreamy existence of his (very real) character and his troubles.  This interplay between being real and dreamy, sober and drunk, elated and depressed gives the film its distinct quality of 'in between',  a real asset in the otherwise sensitive and well-placed animation effort.

About Quentin Vien
Quentin Vien studied CG direction at Supinfocom (France) where he directed the short film Mister Sandman. He moved to London in 2007 and worked as an art director in an animation studio and later as lighting supervisor in a big VFX company. His personal work is influenced by Mexican art (where he grew up) and by his everyday life in London. During his spare time he directed the self produced, hand drawn, short film Deadman’s Reach.