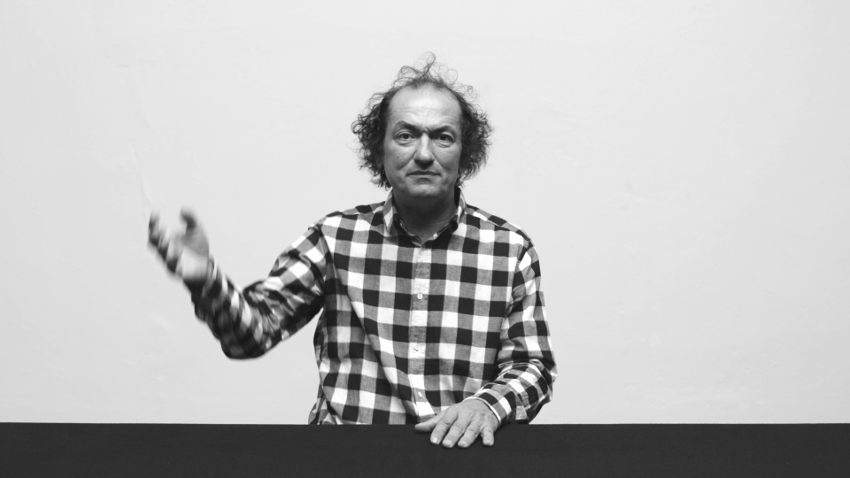 How does it feel like having a self-described "slapstick avantgarde film" winning the Nelvana Grand Prize at the 2019 Ottawa International Animation Festival, and then subsequently nominated for an Annie Award for Best Short Subject? And, of course, other festival selections and wins were forthcoming as well.

Austrian filmmaker, artist and musician (and lecturer, and curator) Thomas Renoldner seemed to hit the awards circuit jackpot with a film that is miles apart from traditional narrative films. A huge hit with festival audiences as well, it now seems that DONT KNOW WHAT was almost ordained to gain this status. But, of course, nothing is ordained in the world of independent animation.

In DONT KNOW WHAT I explore the possibilities of single frame editing of SOUND+IMAGE of a live action video. My voice and my body are the central tools for this exploration. I transform language into music, turn my voice into a drum machine, and my body becomes a surreal fantasy with a dozen of arms and impossibly wild movements -
The main reason to make this film was to enjoy myself and to celebrate, that I can talk and move my body - Thomas Renoldner

We talked with Thomas Renoldner about DONT KNOW WHAT.

TR: I am not only a filmmaker, but also performance artist and musician / composer. For instance in my 16-mm-film performance "DER DIALOG" (The dialogue between film and reality, 1988) I am acting in front of a film projection and the audience watches a dialogue between me as a real person and myself as my film double. The interesting aspect in this work is, that every time I show this performance again, I am older and the difference between real and film conserved person is getting more visible.

I also see DONT KNOW WHAT as some kind of performance between myself on the screen and the audience. It is always quite thrilling for me to be present in the cinema and to experience the atmosphere and reactions, since they can be very different. Or, to answer your question more quickly: I enjoy to see myself on the big screen! ;-)
(DONT KNOW WHAT was definitely made for the cinema !)

Secondly, or maybe even more relevant: It was clearly my plan to make also an entertaining film, - to explore the possibilities of micro-editing to produce funny or surprising effects - and when I use myself as an actor, I have all freedom I want to make myself appear ridiculous or strange, I have no limits of how to treat myself. It might be more difficult when using another person.

Also, I found it extremely interesting to explore myself: to discover very minimal aspects of my physiognomy, and also kind of hidden and new meanings, which become visible with the method of micro-editing.

ZF: Ιf I understand correctly, this is past footage/photos.

TR: The footage used in the film was a live-action studio shooting, done on one day in 2015, but it took me quite some time, to do the editing. I had developed numerous versions, ordered in several categories, and at the end used just a small part of them.

ZF: Your Sunny Afternoon looks like a more relaxed version of DONT KNOW WHAT. Also, there's music in the former, but aberrant speech in the latter. How do you compare the two films, and the role of speech here?

TR: Sunny Afternoon was originally planned as a music video for a song I had made when I was much younger, and the second part of the film (the pop culture / music video part) comes close to the original storyboard. But during editing it "happened“ that the 16 photos of myself sitting down to a chair expanded into the "part one“ of the film (the structural / avantgarde film part), because I enjoyed so much to play with the single frame editing. In the original script that part should have lasted just a few seconds. So, I would compare DONT KNOW WHAT just with the first part of Sunny Afternoon.

In DONT KNOW WHAT I continued to explore the possibilities of shot-cut-editing – which in times of digital media have become even richer, and, instead of using photos, I decided to use live-action footage and to edit sound and image simultaneously.
In Sunny Afternoon I had edited the image first and then composed kind of a "minimal music“ piece, using the tones on a half-tone-scale in exact synchronicity with the row of photos, but building. DONT KNOW WHAT was more like composing a piece of music based on the different sounds of my voice. In the first part of the composition the sentence "I don't know what I'm doing" with its many soft vocals allowed fluid sound transitions, while in the second part it was my idea to turn the consonants of e.g. "just experimenting" into the more sharp sounds of a drum machine. In the last part,  the sounds of the moving table and chair enlarge the range of sounds even more.

I am very interested in contemporary music and sound art and influenced by the experimental use of the human voice by musicians / composers like Demetrio Stratos or Otto M. Zykan [see here and here]; or we might also name Hugo Ball's dada poem performances as influential. I am transforming language into music.

ZF: Editing is the bread and butter of experimental filmmaking and animation, but here you edit the same image (human person) in its variety of facial expressions and gestures. I think you call it 'micro-editing'. Can you explain the concept and what attracted you to that?

TR: I regard the films we talk about here also as a reference to the history of avantgarde film, particularly to flicker-film and short-cut-editing. I would name artists like Tony Conrads (The Flicker, 1966) or Rafael Montanez Ortiz (Dance serial, middle 1980s), who used programming to manipulate the playback of found footage sequences transferred to video discs, as influential.

But I don't want to limit myself to the academic avantgarde. There are also pop-cultural influences to be named, like the so-called 'Fußball-Ballet ('soccer ballet'), which I first saw in the middle of the 1970s on TV. The movements of soccer players were quickly edited in forwards-backwards-loops, which had an extremely funny effect, serious sportsmen suddenly appeared like childish automatic puppets, or the repetitive movements in pairs or groups evoked homo-erotic fantasies. Editing changed the meaning of the original footage into something quite contradictory. But I would also name short-cut-edited internet-videos or the animated GIFs culture as a reference for my work. So, besides the fact, that I am fascinated or influenced by the quoted strategies and simply enjoy the visual power of experimental work, I was specially interested to use micro-editing to twist the meaning of the original footage, and to enlarge the possibilities of avantgarde film by adding a good portion of humour.

ZF: Eisenstein said that editing is the prime element of the filmmaking, while Bazin said that cinematography is. At the same time, animation is strongly associated with the visual. Where do you place your own work in the genre canon (experimental animation, experimental filmmaking)? Or are you still experimenting?

TR: I would say my intention is to dissolve a strict genre canon, even if I have to experience, that some curators are still insisting on kind of old-fashioned rules, what a certain genre allows. I am asking, how much experimentation is possible in animation, and how much entertainment in experimental film.

ZF: One of the points the film makes is that an artwork does not need to have a traditionally 'finished' structure in order to be considered a work of art. Is this something you endorse for your whole and future work as well?

TR: I think DONT KNOW WHAT has a very clear finished structure. I worked on perfecting this structure for several months. It is a audio – visual composition of three parts, and I already mentioned the musical elements I used for them. Image-wise it is a very strict development of visual manipulation tools: in the Part One I use only forwards and backwards editing, starting with 8- frames loops and ending with single-frame editing. Part Two adds vertically mirrored images. Part Three finally intensifies the visual language by adding horizontally mirrored images, negative, and flicker film sequences. I cant imagine a more classical composition of music and image. ;-)

Film Review (Vassilis Kroustallis)
I don't know what Thomas Renoldner the outcome thought would be when he was experimenting with image and sound, but I can definitely tell that DONT KNOW WHAT feels like  an uninterrupted suite of performing, animating and editing in three movements. Apart from the musical structure of the piece, it is almost celebratory to hear sound aligned with saccadic eye movements, and discover how you can dilute a phrase to its elementary ingredients. As methodical and accelerating and as playful as ever, DONT KNOW WHAT is not just a funny exercise or an experiment in filmmaking; it is mostly a work piece that can show a personal identity in progress of itself deconstructed and being again reconstructed. Renoldner cares for his subject on screen, despite making him the subject of his experiment. His character is always on focus, ready to converse with the audience, and can use any props and movements to state that human identity is an effort, not an achievement. This is a film that keeps you glued to the big screen, and somehow relieves you from the burden to think of what animation and filmmaking can and cannot do. It's simply out there for you to try, and that's the film's lasting legacy. 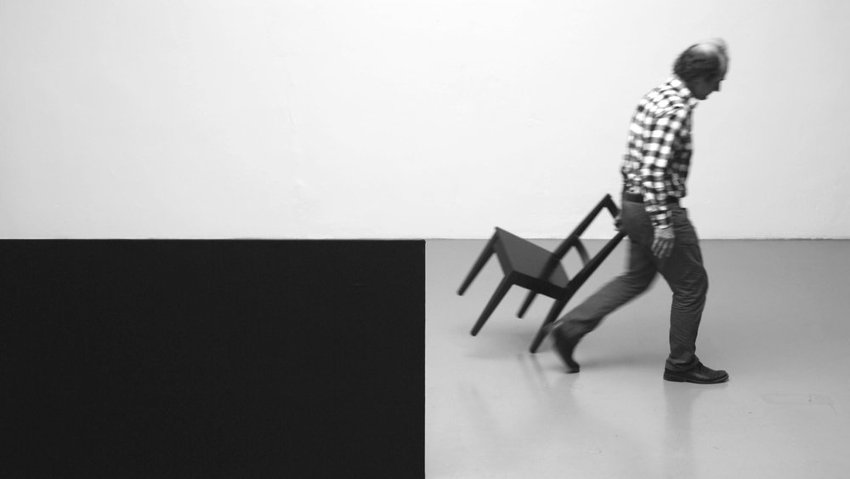