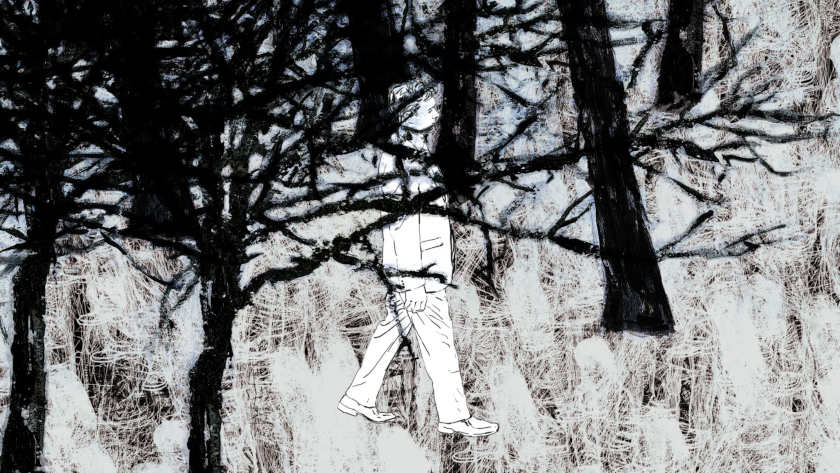 Two characters meet and confront each other in a merciless battle. Thomas Corriveau talks to Zippy Frames about his animation short Folly (La bêtise).

An animation short with two people and visuals which reminds of etchings. Quebec visual artist and animation director Thomas Corriveau used his animation short Folly (La bêtise) to tell a story of ever-recurring silent battles. The film went on to compete at many festivals, including Annecy, DOK Leipzig, PÖFF Shorts and more.

"I remember discovering Goya’s paintings and etchings when I was about fifteen" Thomas Corriveau talks to Zippy Frames. He was deeply influenced by the master's late paintings (such as the Black Paintings from the Quinta del Sordo and his Disasters of War); an experience that still remains an essential source of reference for him as a visual artist.

Yet the film itself came out of a theatrical project he participated in, as an artist (Nathalie Sarraute’s Pour un oui ou pour un non), where he produced a series of animation loops based on gestures borrowed from Goya's etchings.

The two men in the rotoscoped film also originated from the play itself. "When the show was over, I recycled the loops and added new ones, integrating them in a completely transformed scenario, conceived as a more open and abstract continuum". The man in the suit was the embodiment of success and conformity (multiplication of loops is the aesthetic equivalent), while the second man is an impatient and violent one; his impulse echoes the desperate actions of the populace in Goya's Disasters of War.

The work on the film followed a process of successive stages. "It was similar to my approach in painting" Corriveau elaborates. "I drew the images as separate fragments that I slowly, and somewhat randomly, assembled through an editing process that felt very much like a collage from which a story line emerged. I developed a continuum of loops blending one into the other, exploring ways of having the viewer feel the story more than receiving it as a legible narrative".

Backgrounds were built up by accumulating innumerable layers from all the loops, to make them feel ever present throughout the film and show the unavoidable character of war. Yet, at the same time the film's structure also allowed its director to dissolve the contrasts and explore angst through an obsessively repetitive pattern.  "I was interested in obtaining a narrative effect but, coming from a visual arts background, I wanted to have the possibility to show the film as a painting on a wall, as a continuous loop that would reveal its details through time, the slow time of contemplation associated with painting". (Versions of this style had already been presented by Corriveau at different occasions in gallery and museum spaces). 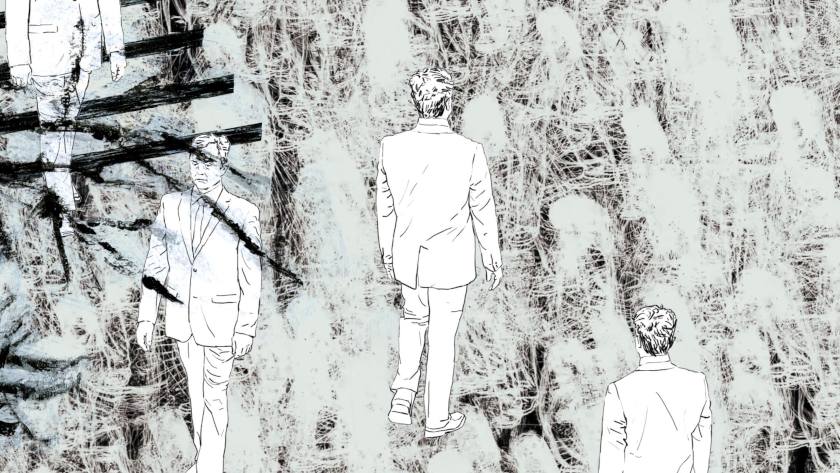 In preparation or the film, there were a few intensive sessions with the actors performing a series of gestures (rehearsed or improvised) that were to be transformed into loops. "I drew the animation on a digital tablet, being careful not to let the rotoscoping dictate the quality of drawing and focusing on an energy similar to life-drawing. It was important to try to attain the most sensitive touch in drawing while keeping the lines as descriptive as possible. In my mind, the draughtsman is the third character of the film and connects directly with the voice of the narrator", Corriveau explains.

The soundtrack of the film (by Jean Derome) also stems from the theatrical play and the exchanges Corriveau had with both the composer and Christiane Pasquier, the play's director. "I invited Jean to reorganize and expand his compositions to create a fusional unity with the images and the voice-over. I wanted the soundtrack of the film to be almost exclusively musical and he developed a series of loops that loosely echo the gestures and textures of the film, strongly contributing to the obsessive quality we were looking for".

The question of visual space is a fascinating one, as is he way it is handled in the Folly film. "It is true that this film is evoking an open space through which the characters evolve, but at the same time I see it as a compressed space, overpowered by the abundance of lines, images and figures. At moments, I can almost feel that the space is under the pressure of an etching press, compressing the images on a very flat surface". Corriveau has worked in the past in structures obtained by the means of perspective; his upcoming animation project involves the representation of enclosed spaces using isometric perspective

Even though Folly is more on the side of the dark and pessimist aspect of life, this is not to express the artist himself; Corriveau self-identifies as an optimist, and his recent productions (films and paintings) involve both more colour and humour. His new film, They Dance with their heads, premieres at Annecy Festival 2021.

Film Review (Vassilis Kroustallis):
More than the fact of total destruction what matters in the Folly short film is there is no reason why; why did the first man enter into the forest, why did the second man exposed his predatory skills on him, and why are we witnesses to this episode. In the same way, the film puts as many layers and loops to repeat, reinforce and hide, the narrative (and the voiceover) itself becomes both first-person and third-person, as if we're trying to enter a secret world and are immediately drawn away. Pulling on and off in this epistemological game is as potent as the 'battle' itself in the open arena of destruction. There are musical moments of nostalgia and animosity, and the camera traces with exactness the movements of its multiplied characters. Folly is a film that benefits from multiple viewings; it puts forward a map of the human folly with persistence, sharp visuals and a protean sense of narrating your own folly as an ancient legend of mankind itself.

Thomas Corriveau made his first films in the 1980s and pursued a career as a visual artist, working mainly in the fields of drawing, painting and animation. His works are part of various private and public collections and he has exhibited regularly in Canada and abroad. He is a professor at the School of Visual and Media Arts at Université du Québec in Montréal. After a two-decade hiatus, he returned to animation and is now fully involved as an independent director.

Thomas Corriveau on the web and vimeo