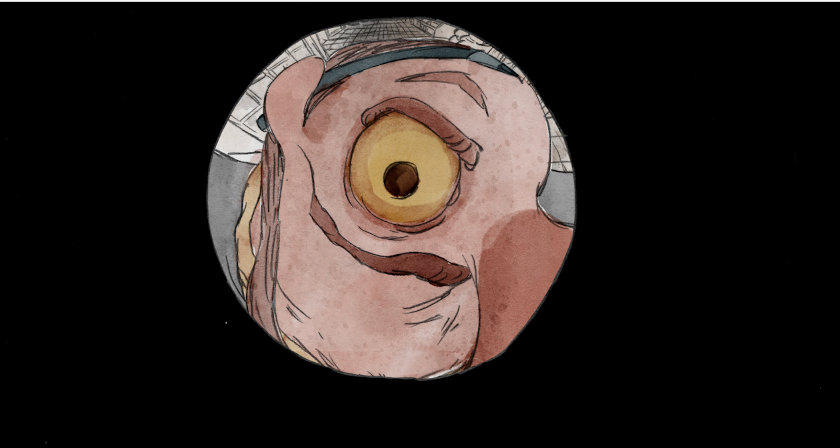 Here's a mouse that can lead to a lot of trouble. Iranian animation filmmaker Shadi Adib presents Fuse, which quickly became a festival favorite.

How do we best kill the mouse?

Graduation film of Shadi Adib based on a novel by Sadeq Chubak with voices from Nick Cave, Andreas Hykade, David Bennett, Shaun Lawton and Jimmy Hibbert.

ZF: I saw it was based on a short story. How did you find it? And how did you work with your collaborators? Did you and your writers have to adapt a lot (and put it in English as well)?

AS: I was 18 years old when I found this collection of the frequently censored Iranian writer Sadeq Chubak in a small second-hand shop known only to cool kids on the famous Enghelab Street in Tehran. Like many Iranians, I knew a few of his stories, but there was this three-and-a-half page story in the collection I didn’t know before. I was immediately fascinated by the visually vivid story. After my master's degree I once storyboarded almost the entire story. At some point I gave up: I wanted to emigrate to Germany and was very busy learning German!

In February 2014 I translated the story into German myself. FUSE was my first idea for my graduation film and was immediately approved by the institute. When I did the first treatment and the first preview picture, I met a very young and talented screenwriter, and he translated everything into proper German. In the beginning we met very often, and we wrote about 40 versions until we were satisfied with them. We changed the short story quite a bit. For example, in the original story the whole village wants to kill the mouse - not just a handful of men. Or the fact that the original story is not told from the mouse's point of view, but by an omniscient narrator. A lot has changed, except for the very essence of the story - the question of how to best kill a mouse.

ZF: You've made other films before (including commissioned films). How did you feel about making this film? You still had "student requirements" to fulfill; but were you more or less relaxed to pursue your own story?

AS: Short answer is yes! To be honest, there weren’t so many restrictions when I started the project. But in retrospect, I think that some constraints from the very beginning on would have generated some positive effects later in the work. In the last third of the production, when the work load had already become very large, they tried to limit it somehow. But too many processes were already ongoing and I had to finish the film as it was planned. Even though it took a little longer then.

ZF: How did you find all these people (including Nick Cave) to participate in the film? And how did you guide them in their voice acting?

AS: Basically, they had to be able to sound like the animal they were supposed to play. When I sketched the truck driver, there was a joke within the team that the sketches looked like Nick Cave. The joke finally reached the music department of the Filmakademie, and it turned out that Ed Cantu, one of the music professors, knew him personally. And so it went on until one day I received an e-mail from Nick Cave with the message: "Yes, I am the truck driver!". As for the guiding, I was always present in the sound studio and gave my instructions. However, with Nick Cave alone, I had to give my instructions via video conference. Because the only restriction he had was to record it in his own studio, and the British government refused to issue me a visa due to my Iranian nationality.

ZF: Was the way to tell the story from the viewpoint of the mouse from the start? Did you have to make any changes in the process?

AS: Yes, I have chosen mouse POV from the beginning. I wanted the audience to feel like the mouse trapped in a dark room that is only lit by this hole on the screen. But I also had another idea to shoot the mousetrap in live action and animate everything else. We even shot everything, but the combination of 2D animation and real footage was not quite satisfying. Then I had to animate the mousetrap as well. And catching up with the schedule was no fun.

ZF: Your viewpoint makes you create visually grotesque characters, enlarged and stuffed and distorted. Would you describe this as your own style, or this is just the design adopted for the particular story?

AS: The story called for it! I designed the characters especially for it. And of course it was more fun to animate them in this distorted way than if the characters had been unaltered by perspective.

ZF: Why did you feel you need to include a song as well in the film? How did this come about?

AS: I couldn't convey the euphoric madness of the men so well with text, but I could with rhyme.

ZF: I would describe this a story about a cacophony of voices which necessarily leads to a comic destruction. Would you agree with that, and would you actually align it with politics / societal issues - or not necessarily so?

AS: Ha-ha! Even if I were to say that this would not be the case, it is still true for the author of the short story. For all stories of Sadeq Chubak have strong social and political tendencies. Therefore, I would say that I agree with all your statements.

Here it is a companionship of talents producing top-notch work under a single, mousy vision. Fuse by Shadi Adib is a much welcome entry in the contemporary animation scene,  and it is one of those cases that collaborations of visuals, voices and songs really pays off. Fuse is not about the mouse, of course, but concerns our own self-destructive fears and attitudes as viewed by something who, by nature, is immune to such fears -except fr the fear of survival. The screenplay (by Simon Thummet and Shadi Adib) builds both strong characterization and individuation, while animation here serves to magnify personalities - as if a magnifying lens was put over human follies. The burst of over-activity finds its natural conclusion in a song that is visually handled by the tropes of comic strips. With a well-calculated timing and a fitting allocation of roles and characters, Fuse becomes an energetic and refreshing micro-symphony of the hunter and hunted theme -at least, from a mouse's point of view.

About Shadi Adib
Shadi Adib is an animation Director, Character Designer and hand drawn Animator from Iran based in Germany. Her passion for drawing lead her to a B.D. as graphic designer from Tehran’s Fine Art Faculty and her M.A. as animation director. Her graduation film at Filmakademie Baden-Württemberg is FUSE. The film was selected at more than 130 festivals around the world and received several awards. After her work on The Amazing World of Gumball with Studio SOI, she’s currently working as a freelance artist. Her latest short film is the commissioned work Ode.