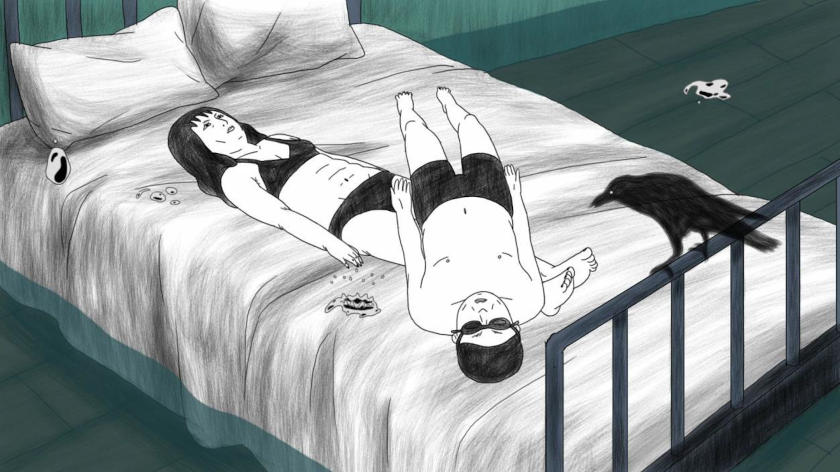 The film Ghosts by Park Jee-youn received the 2020 Excellent work award for short film at the 46th Seoul Independent Film Festival, and has participated in many festival competitions, including Tricky Women/Tricky Realities 2021 (one of our top picks). The director wants to portray the daily lives of two lovers who have lost something in life and become ghosts with experimental images and videos.

In the boredom of life, they became ghosts. The crows are after them - Film Synopsis

ennui (n).​ ​ a feeling of boredom or laziness resulting from languishing in a given state or situation

Ennui is a condition that has certain preconditions. No one begins in a state of ennui. For ennui to exist, there has to have been interest or affection, love or obsession. We do not fall into a state of ennui if we were completely disinterested or uninspired to begin with. Ennui can appear in many forms, such as a lack of expressiveness, emotion, sensation, or reaction. But there is always something that is missing. In other words, ennui is preceded by the presence of expression, energy, sensation, and reaction. The definition of ennui states that it is a process of waning or languishing, from a state of presence to one of absence.

Park Jee-youn’s previous works have also dealt with the topic of ennui. In her films ​Something that She Can’t Avoid in the City (2008) and ​ Camels (2011), the protagonists tend to be unexpressive, not only when they are alone (since people tend to have no expression when they are by themselves) but when they are in the company of others, whether they are face-to-face or having a conversation. In fact, the situations in which we witness ennui paradoxically also invite our laughter, as though we are watching the theater of the absurd. A protagonist looks on without feeling at a person who is trying desperately to restore a romance that has already ended. This imbalance in their relationship—as one person is filled with feelings of loss and regret, while the other feels nothing at all—can only be described as absurd.

It was also the distinctive feature of Park Jee-youn’s portrayals of the world and human relationships. When her previous films were made, Korean independent animations at the time approached interpersonal relationships from a highly abstract and conceptual point of view (preferring to show scenes or circumstances rather than events or incidents). Showing fine sensibilities within those relationships was considered to be extremely introspective, or even a kind of escapism. It made the work of Park Jee-youn, full of dialogue surrounding expressionless people in real situations and everyday locations, all the more startling and unconventional.

Ghosts shows Park’s notion of ennui taken to its final stage, as if the couples that had fallen into this state in the previous films have continued to languish in their relationships—perhaps even tying the knot! The endgame for the evolution of ennui doesn’t lead to some tragic or explosive outcome. That would require energy, and as we know, ennui is a state in which one’s energy has withered away. ​ Ghosts shows us not the imbalance of ennui but a balance in the degree of ennui that each person feels. The characters have a conversation that is devoid of emotion and also believably authentic. In fact, their dialogue might be better described as two monologues spoken by individuals who merely happen to be facing one another.

The final phase of ennui doesn’t mean looking through other people as if they are ghosts but instead becoming ghosts ourselves. Ennui creeps into the soul and swallows a person whole. ​ Ghosts captures this truth in a brutally honest portrayal of everyday life.

About Park Jee Youn:
She was born (1974) in Sachoen, GyeongNam, South Korea. She graduated  (1993) from Jinju Health College of Health Administration. She is working at Studio 'Nowornever' as an Art Director.