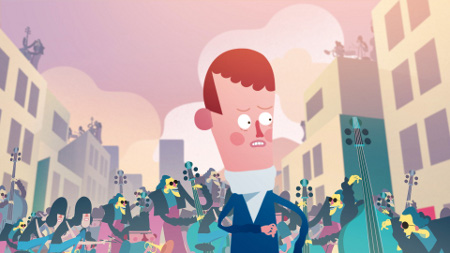 Jazz that nobody asked for by Rune & Esben Fisker

Imagine how a completely serious and grave situation can go derailed by an improvising jazz band. Watch Jazz that nobody asked for.

The brothers Rune & Esben Fisker in Denmark (Benny Box)  have created a slick and full of energy and vibrant colors short, based on swing jazz tune "Quaker City Jazz".

Jazz that nobody asked for includes both high drama and anarchic comedy, and its power lies in infusing places of worry and lament (hospital, cemetery) with an unstoppable force of life.

Visit thejazzmovie.com, read the directors' statement below, and learn more about Benny Box.

Sometimes a song can get stuck in your mind. Become a little piece of unwanted music, that keeps looping for the rest of your day. Neurologists claim that stuck songs are like thoughts we're trying to suppress. The harder we try not to think about them, the more we can't help it. The phenomenon is also known as earworms, and the ongoing 'dim di da da dum' causes a kind of brain itch you can't scratch.

Jazz that nobody asked for is an ode to all those unwanted songs out there, that have nowhere to go. The music that haunts this film, is the amazing swing jazz tune 'Quaker City Jazz' by the long forgotten 'Jan Savitt and his Top Hatters'. In 1937 they were the first jazz big band to feature an african american vocalist.

The film is made without any financing, and has no commercial purpose. The love of all things animated has been the driving force for the small team of 3 persons that has created it.

Benny Box is a small design- & production company founded by the brothers Rune & Esben Fisker. We specialize in animation design & motion graphics, and have worked with both producing our own animations, and making design & doing art direction for a lot of well respected animation directors in Denmark. We have worked with most danish production houses, making title-sequences & design for a long range of films, tv-series & programs. Lately Benny Box has made title sequences & identity for the highly acclaimed danish tv-series 'Borgen'. 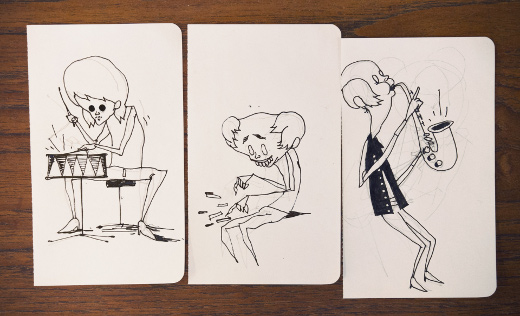